I just found an online article about Early Melbourne from 2004,  published in the very first edition of Postcolonial- an open source journal that is now in its eleventh year.

You can source the article at:

In this article, I will examine three elements that were posited by Melbourne’s early surveyors as incompatible with the development of a city invested in post-Enlightenment commitments to the rational and orderly division of space: the indigenous population, the extant landscape, and the poor. Each of these ‘problematic’ features was, for the most part, posited as antithetical to the creation and sustainability of an ordered and orderly social space through which the settlement, the colony and the Empire invented and inhabits a place.  Each element was, ostensibly, addressed in the founding strategies of Melbourne, with varying degrees of success, between 1836 and 1839.  Thus, this article highlights the irrationality — the almost mythical foundations — of the city.

As she points out, Major Thomas Mitchell’s encomium of the beauties of Australia Felix and Robert Hoddle’s grid were both describing something that wasn’t there.  Mitchell feigned complete ignorance of the presence of indigenous people, while Hoddle just superimposed a public-service template onto the landscape. They were producing predictions, rather than describing extant realities. 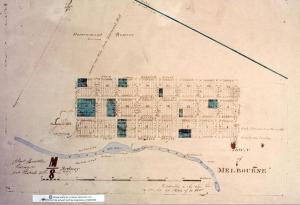 There were, of course,  indigenous people right in the centre of Melbourne, and settlers had started building along their own natural contour lines, following the geography of the site before Hoddle got to it with his surveying tools. Even though the word ‘slum’ would not be used for another fifty years,  the Hoddle grid and the push to construct only wide streets was responding to a fear of the vice-ridden poor.

As you might guess from a journal called Postcolonial, there’s some fairly complex language in this article, but it’s an interesting reflection on map-making, symmetry and geographical fantasy.