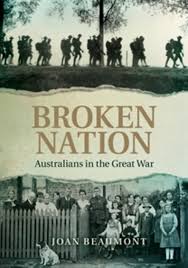 For someone who intended to eschew much of the hype about the centenary of WWI, I seem to have indulged rather more than I anticipated.  I attended the RHSV Victorians and the Home Front conference, I read The Kayles of Bushy Lodge (largely because it was written by a woman about the homefront during WWI) and I watched and very much enjoyed The War That Changed Us.   I was aware that Joan Beaumont’s Broken Nation had been well received, but what probably tipped me into reading it was Marilyn Lake’s comment in her ABR review  that

If you read only one book about Australia’s experience of World War I, as the deluge of commemorative publications marking the outbreak of the war becomes a veritable tsunami, make it Broken Nation, an account that joins the history of the war to the home front, and that details the barbarism of the battlefields as well as the desolation, despair, and bitter divisions that devastated the communities left behind.

I agree with Lake’s recommendation; I admire the book for its breadth but…oh, it was relentless reading.

In her opening paragraph Beaumont asks ‘why this book?’ given the already voluminous literature on Australian military history, especially in this centenary year. Her answer is this:

It has been written to provide what is still lacking in the literature: a comprehensive history of Australians at war in the period 1914-19 that integrates battles, the home front, diplomacy and memory. (p.xv)

It achieves this completely.  The book is structured into  six very long chapters, one for each year of the war.  Within these chapters, Beaumont moves chronologically month by month, crossing back and forth between battle, homefront,  diplomacy.  Even within these themes, she shuttles between battle as strategy and battle as lived experience by the men who were there; homefront in a political sense, homefront in a social sense; domestic politics and diplomatic politics on an international stage.

But for me, the battle scenes dominated and they dragged, particularly during the longest chapter ‘1917: The worst year’.  It took me some time to get into the mindset where a death and an injury were both counted as a ‘casualty’ without distinguishing between the two, because the effect of both was the loss of a soldier who could fight then and there.  I found myself inwardly groaning as I turned  page after page to see yet another map with arrows showing lines of attack.  There’s 36 maps in the book as a whole, (16 of them in the 1917 chapter) spread across battlefields at Gallipoli, the Western front and the Middle East, reinforcing the inexorable to-ing and fro-ing year after year.  The battle scenes are interspersed with diaries and letters from the men,  and visceral descriptions of sights, sounds and smells, but for me they were deadened by the weight of strategy and the stilted, chest-puffing language of military commendations.  Charles Bean has a lot to answer for.

But she also  moves away from the noise and shouting to consider  the process by which these sites have been memorialized.  She notes that many of the battles that the soldiers at the time chose to have memorialized through statues are not the ones that are uppermost in national memory today. For example, the 5th division, when asked in 1919 where it wanted the memorial celebrating its wartime achievements to be located chose not Fromelles, but Polygon Wood.  Our emphasis on Fromelles springs from the 1990s and the combined interventions of Prime Minister John Howard’s overseas war-memorial construction scheme and the archaeological persistence of retired schoolteacher Lambis Englezos.  This is true of many of the battles: what we have been moulded to memorialize, is not necessarily what the soldiers themselves wanted to remember and honour.

Even though the military sections weighed heavily with me, she does interweave it with the homefront and the broader diplomatic scene.  Her analysis of the homefront includes the political wranglings with Billy Hughes and conscription, and the effects on the economy and political life of the crackdown on unions and the War Precautions Act.  I’ve imbued the Labor Party lore of Billy Hughes ‘the rat’ but I hadn’t realized how much I dislike him on the broader international stage as well.  I enjoyed the final 1919 chapter very much, and its emphasis on the diplomatic tradeoffs at the end of the war.

Quite apart from the experience of reading the book, which I found draining, Beaumont makes some important points to counterbalance the type of history that is warping our present day politics and being pushed so insistently in this year of commemoration  as demonstrated in Henry Reynold’s recent excellent article Militarization Marches On.  She is at pains to point out that in many of the battles that we have appropriated to our national memory, Australians were not the only troops there.  We were part of the ‘colonial’ forces, for Britain to do with as she pleased, without consultation.

The title of the book is ‘Broken Nation’ which echoes Bill Gammage’s book The Broken Years.  She kicks back against the idea that Australia was ‘made’ through WWI. Instead, she argues, Australia – the Australia the soldiers sailed away from- was broken by WWI.  Not only was there the disproportionate loss of life, and the burden of injured soldiers, but there was “the less quantifiable embittering of public life” (p. 549).  The conscription debates had polarized Australia, and the rift did not heal easily. The war gave rise to xenophobia and insularity and fear of left-wing radicalism. It became an inward-looking society, focused on grief and the rancour of the war years. (p. 551)

The book started with a prologue that spoke of  Beaumont’s own great-uncle, Joe Russell.  He reappears once or twice during the book.  Other individuals pop up from time to time- Archie Barwick, Pompey Elliot- familiar names from the recent documentary The War That Changed Us.  I must confess that I preferred the grounded, person-based approach in the television documentary to Beaumont’s soaring birds-eye history.  But the reality is that we probably need both.  And in this book, the birds-eye history is in very good, sure hands indeed.

I’ve posted this review in the Australian Women Writers Challenge

This entry was posted in ANZAC, Australian history, Book reviews. Bookmark the permalink.