Judge Willis on the front page of today’s Age? Not quite…. 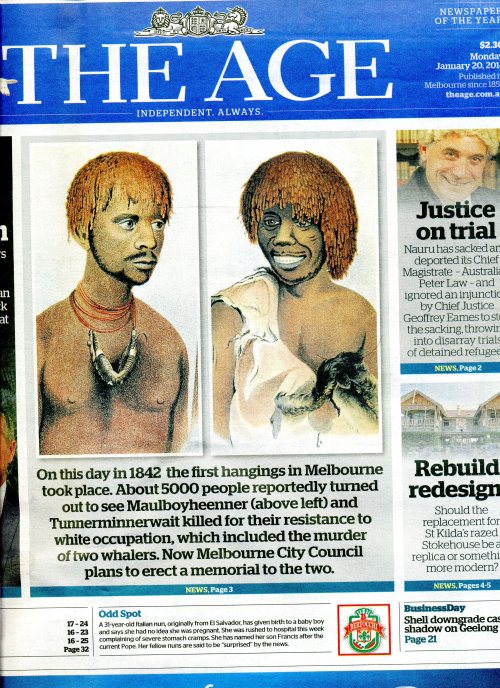 It’s the 20th January and so it is the 172th anniversary of the hanging of Maulboyheenner and Tunnerminnerwait.  Each year this anniversary receives more prominence, and I see from today’s article that Melbourne City Council plans to erect a memorial, probably outside the Old Melbourne Gaol.  Details of location, cost, size and nature have not yet been decided. You can read the research paper by Monash University academic Clare Land supporting the proposal here.

I thought that Judge Willis was about to get his 15 seconds of 21st century fame in this article, but he’s not mentioned at all.  So, you’ll just have to read my earlier posts about Judge Willis’ part in these hangings, which were the first official hangings that occurred the Port Phillip district.  You can read them here and here.

Again, I’d strongly encourage you to read Leonie Steven’s article ‘The Phenomenal Coolness of Tunnerminnerwait’ published in the Victorian Historical Journal, Vol 81, Number 1, June 2010.  If you’re a member of the State Library of Victoria, then you’ll be able to get access to it (likewise with the other state libraries in Australia.  It’s really worth joining your state library: you get so much access to databases and journals from home).  Alternatively, there’s an online version here.   It’s a beautifully written article that has the humility to admit that sometimes motives for action are ultimately unknowable and that it is important to go back to the primary sources again and again.  Good advice.