‘Every Secret Thing’ by Marie Munkara 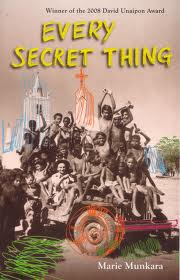 Before I talk about this book, a word first about humour, and aboriginal humour in particular.  Inga Clendinnen closes her analysis of the very earliest days at Port Jackson in her book Dancing with Strangers with an observation about humour as a means of connection between black and white Australians.  (Among historians, there’s often an anxiety about nomenclature for aborigines/Indigenous/specific tribal name/Aboriginal Australians- and to a lesser degree for whites/British/settlers as well.  Clendinnen settled on the term ‘Australians’ for the former, and ‘British’ for the latter, recognizing the limitations of both terms.)  But humour, she suggests, has been a bridge:

There remains a final mystery. Despite our long alienation, despite our merely adjacent histories, and through processes I do not yet understand, we are now more like each other than we are like any other people.  We even share something of the same style of humour, which is a subtle but far-reaching affinity.  Here, in this place, I think we are all Australians now. (p.288)

And so I come to Every Secret Thing by Maria Munkara, which was awarded the 2008 David Unaipon Award. It’s only a small book at 179 pages, and while it’s not, and does not claim to be,  high literature, it’s an important book nonetheless.  It is a series of tales set around an Aboriginal mission in far northern Australia with the Mission mob, the Catholic clergy, trying to convert the Bush mob who lived just outside the Mission.  The Bush mob move back and forth between the arbitrary strictures and efforts of the  clergy and their own more grounded life outside.  They are clear-eyed about the hypocrisy and smallness of these white priests and nuns, but they are also painfully aware of the degree of control that the mission has over their lives.

The stories are self-contained, but there is a broader chronological arc that runs through them, particularly in the second half of the book.  Hippies with marijuana arrive amongst the Bush mob, a mission is established for the ‘half-caste’ children who are taken from their families and sent into domestic service,  and just occasionally a child returns to the mission but cannot find her place back amongst her family again.  And finally a couple of the Bush mob men confront Father Voleur of the mission, “asking that the mission mob leave because no-one wanted them there any more” and were told to bugger off:

So began the slow downwards spiral of despair…Then the grog came and the winding path of good intentions became a straight bitumen four-laned highway that led even deeper into a world of self-destruction and hopelessness that no-one knew how to fix.  And then more and more people began to leave unexpectedly without goodbyes or explanations and a sorrow so deep that no-one could see an end to the despair descended upon them and they’d be found hanging  from trees or electrocuted by the power lines and the cemetery had to be made bigger to accommodate the unexpected influx of new residents.  But there was one thing they were certain of.  They didn’t have to die to go to hell because the mission had happily brought that with them when they’d arrived unasked on the fateful shores of the place that was their heaven all those years before. (p. 179)

This stab of pain runs throughout the book, right alongside slapstick and send-up, derision and wry irony.  Yes, there were places where I laughed out loud in this book (a 2.5 on my 4-point  laughter scale) and  Munkara’s  real skill  is to write so that, after reading a comic scenario, your smile freezes as the underlying pain and cruelty of what she is describing seeps into you.  It is a quick, deft, cutting wit.  There’s anger here too: an almost shaking rage at the inhumantity of separating the ‘half-caste’ children from their families into the ‘Garden of Eden’ mission on a nearby island.

But time has a way of covering all wounds with scar tissue, and the little abductees eventually settled down into their new life away from their homes and their families….But if the nuns at the Garden of Eden knew about the scars they certainly didn’t show it as they worked relentlessly to shape the unruly half-caste rabble into obedient and God-fearing servants of the muruntani [whites].  No rod was spared or abductee spoilt in the process as the little coloured kids were repeatedly chastised and flayed until prayers and hymns and excerpts from the Bible were slowly absorbed by rote into every fibre of their being.  And when they were eventually knocked into shape they were passed on to caring white families as domestics and the like because, let’s face it, the mission mob knew these useless individuals would never amount to anything else.  In order to control them many of the good Christian families duly followed in the incarcerators’ lead by perpetuating the violence, sometimes throwing in a few more tortures for good measure like rape and mental abuse, because this was the only thing this half-caste lot understood.  A few even had to be sent back to the mission because they just didn’t seem to respond to the kindly ministrations of their new families and kept trying to run away or told wild stories to people about their treatment.

Sad, sad indeed. There’s anger at the hypocrisy by which the Mission mob decided that  a white woman, Odile, who had a ‘half-caste’ child called Treasure should be allowed to keep her own child:

And didn’t the anger of the bush mob bubble away in their guts as they grumbled at the injustice of it all.  The more erudite had reasoned that if they had to hand over their coloured kids then why shouldn’t Odile.  No matter that the mother wasn’t black, the kid was still coloured, wasn’t he, and everybody knew what happened to them. (p. 137)

But Father Macredie found a way to rationalize himself around this:

…there’d be no way he’d be taking young Treasure away from his rightful parents and the bush mob would just have to accept and understand that.  Despite Treasure’s coloured skin, he would always be white on the inside not like their kids who would always be black on the inside- and that’s where the difference therein lay. (p. 138)

This sounds bleak, and it is bleak.  But just as importantly, there is humour here too, and the author’s photo on the front page shows that.  The pettiness of the Mission mob is skewered, but with almost a sense of pity. There is a generosity of spirit among the Bush mob that is often completely lacking amongst the nuns and priests who have such power over them. It’s the ridicule of pomposity and the refusal to take things too seriously that reflects the humour that Inga Clendinnen noted.   We see it in the recent musical Bran Nue Day, and it’s there in the term ‘Moomba’ (meaning ‘up your bum’) offered up as an aboriginal translation for ‘let’s get together and have fun’ for the founders of  Melbourne’s festival some fifty years ago: a scenario repeated in this book where an earnest ethnographer is tricked into recording a string of expletives and obscenities as ‘authentic’ language.  But make no mistake amongst the derision and send-up, the mission mob do hold the power here, but it’s a hollow and ultimately unstable victory.  And I’m glad that it is.

Blog review from Musing of a Literary Dilettante

Interview with the author by Bob Gosford on Crikey

Biographical information about the author