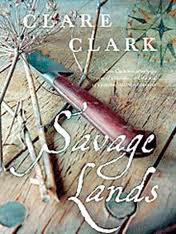 Okay- I confess that I was attracted to this book by the cover, and by the blurbs by Amanda Foreman who assured me that “Clare Clark writes with the eyes of a historian and the soul of a novelist” and Hilary Mantel who told me that [Clark] “meets the eighteenth century on its own terms; knocks the wig off, twists its private parts and spits in its eye…”.  Twist and spit on, I say.  I’ve since found that it was longlisted for the 2010 Orange Prize.

In his book  Replenishing the Earth: The Settler Revolution and the Rise of the Angloworld 1783-1939, James Belich emphasizes the importance of not the  ‘founding fathers’ but the ‘birth mothers’ in ensuring the demographic progress of a settler society.  This book has the birth mothers of Louisiana as its focus, and women’s bodies are at the centre of its focus, as sexual partners,  wives, women in labour, women as objects of desire.

Its main character, Elizabeth Savaret is one of the ‘casket girls’ sent out from France to find a husband amongst the French settlers in Louisiana.  She is a sensitive, educated woman as the frequent (and possibly unnecessary) references to Montaigne throughout the book attest.  In this government-sanctioned marital lottery any husband will do, it seems, but in one of the breathtaking jumps in plot that Clark negotiates, Elizabeth falls deeply, passionately in love with her husband Jean-Claue Babelon.  We do not read about their first meeting, their courtship, their marriage- only that she has been awakened to her own sexuality and that she adores every part of the man who is now her husband.

At this point, I may have been a little sceptical about such slavish adoration. But, having just turned from reading the article about Lucy Peel’s journal, I was struck by the similarities with Lucy’s own declaration of her love for her husband (albeit in a letter to her mother):

the separation of husband and wife must be dreadful, for the love between them is, or ought to be, “Strong as Death” and the longer they live together the harder it would be to part, at least I feel it would be so, for much as I loved Edmund when I married him I have treble the affection for him now, I did not know half his good qualities, he has never spoken an angry word to me and manages my hasty temper so well that I almost fancy at times that I have become a most amiable person.  (J.I. Little ‘Gender and Gentility on the Lower Canadian Frontier: Lucy Peel’s Journal, 1833-36, Journal of the Canadian Historical Association, 1999 Vol 10 p. 66)

It is not just Elizabeth who has fallen in love with Jean-Claude, however.  A younger man, Auguste Guichard, encountered the trader Jean-Claude in the tangled wilderness of Louisiana. Auguste had been left by earlier explorers as a hostage to an Indian tribe while they were passing through the territory and he spent years there, growing up learning the language and observing the tribal practices, neither part of the tribe but no longer completely French either.  When Jean-Claude stumbled onto the scene, Auguste too fell in love with him, not necessarily in a home-erotic way but more as a type of hero-worship.  He returned to ‘civilization’ with Jean-Claude where, in the glow of Jean-Claude’s presence, he fell in love with Elizabeth too in an inchoate fashion.

In this love triangle, it is Jean-Claude who is the least fully realized character. He does not deserve the love of either Elizabeth or Auguste as they both come to recognize, and they are both implicated in his betrayal and suffer for it.  This brings the first part of the book to a close, and as I turned over to Part II (portentously titled ‘After’) , I found myself aware that something momentous had happened in their lives, but I wasn’t quite sure what it was.

In another of her breathtaking plot parachutes, Clark then fast-forwards fifteen years and gradually colours in the circumstances and consequences of the act that closed Part I of the book.   Life has continued on for both Elizabeth and Auguste, but they are bound by their mutual guilt.  The changing circumstances of the Louisiana settlement and its relationship with the Parisian metropole bring them again into each other’s constellation.

This is a very female book, with heavy emphasis on childbirth, miscarriage and sexuality.  The women in the book are drawn well, not just in their own individual characters but in the nature of female companionship and rivalry.  Auguste is more inscrutable and shadowy, but that could be a response to his marginal status between French and Native American communities.  But the main character of this book is the Louisiana forest and swampland, and here Clark’s writing is quite beautiful.  Perhaps it is a little overdone and at times repetitious, but for me it acted as a reminder of the contingency of the settlement by dragging me back to the hostility and sheer dominance of the landscape:

In the wilderness savages lurked in the shadows and the prodigious forest nosed and slid and crept and coiled upward without ceasing.  The licentious suck of it rotted the roots of the trees and pushed blindly up through the decaying luxuriance of its half-digested self, an eruption of snaking coils and crude excrescences bursting from the thick black slime.  Its fecundity was as grotesque as it was shameless.  It throbbed in the ceaseless thrum of the cicadas, in the suck and gasp of the reed-choked bayou.  It draped itself from the trees, smearing their trunks with velvet, hanging in gluttonous hanks from their branches and exploding into pale, fleshy mushrooms at their roots.  There was no shape to the forest, no order.  There was only the ungovernable profusion, blotting out the light, gorging on the lush compost of the dead. (p. 299)

Swamp-porn anyone? (Oh dear? Will that attract spammers and dodgy search terms?)