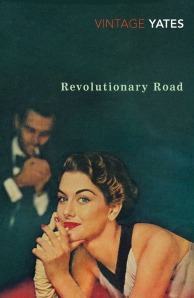 I haven’t seen the film of Revolutionary Road, and indeed had not even heard of the book or the writer until I heard a Radio National Book show program before its release.  But when I saw it in the catalogue for my face-to-face bookgroup (as distinct from my online bookgroup/s) I chose it as my selection for the year.  Ah- the responsibility!  Our discussions generally start “Who chose THIS book?” which is rather intimidating,  before one of us  sheepishly admits  “Umm…I did”.

Well, I did choose this book, and I’d glad I did.  It’s written with that bragging American smart-aleccy tone that unsuccessfully disguises a deep insecurity.  It reminded me of Carson McCullers’ Member of the Wedding, F. Scott Fitzgerald’s Great Gatsby and Salinger’s The Catcher in the Rye– all American books, all quite short, all edgy and anxious books.   Common to these books is the disjunction between dream and reality; a dissonance that is tossed off with a insouciance that is pathetic and heartbreaking.

The book is set in 1950’s suburban Connecticut and it is shot through with anxiety about exposure and failure.  Frank and April Wheeler are a young couple, with two young children, who pride themselves on being superior to the suburban lifestyle that they find themselves in. Their neighbours may be petty, suburban and blinkered, but Frank and April see themselves as quite unlike them.  In their own minds, they are just passing through and going through the motions before breaking out into the lives that they really want to live.  There’s lots of alcohol and drunken conversations, railing against modern life and conformity, but there is a basic, underlying dishonesty about their mundane backgrounds and the banality of their day to day life.  The book is unflinching in its gaze: you feel discomfited for them; you experience that hot prickle of embarrassment that you feel when you can see when someone you love is trying desperately, and failing, to maintain their dignity.

It’s a beautifully written book.  Yates writes in long sentences but never loses control of them. They flow, almost conversationally, and he interweaves effortlessly what is said with what is thought, but not said.   There is much of this double-vision throughout the book-  people plan conversations  but do not voice them;  Frank and April are self-consciously aware of the image that they are projecting, and  every one of the characters has ulterior motives that are poorly disguised.

The 1950s are far away enough now to feel as if, indeed, it is  a foreign country where things are done differently.  The book feels like a retro time-piece, with martinis before dinner and patios, green lawns and Home Beautiful houses.  But it was written in the early 60s, almost about events and people who were contemporary at the time,  and you can sense the waters shifting; you can feel Bob Dylan and Betty Friedan and 1968 forming under the surface.  It’s edgy and painful and well worth reading.