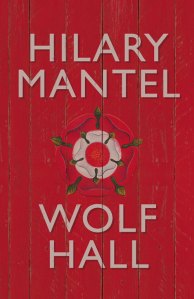 I have been missing in action from blogging recently.  One reason is that I am actually writing real stuff complete with footnotes and headings as I should, and the other reason is that I’ve been back in King Henry’s London, thoroughly engrossed in Hilary Mantel’s Wolf Hall.  It’s been quite a while since I’ve read a book as insistent and attention-grabbing as this: I genuinely didn’t want to be anywhere else in my head other than Henry’s court.

The book, as probably everyone in the world knows, is about Thomas Cromwell, Henry’s adviser and fixer.  But I must admit, that’s as far as my knowledge went.  I’ve seen the BBC series, I’ve read my Phillipa Gregories (The Other Boleyn Girl), Margaret Georges (The Autobiography of Henry VIII)  Antonia Frasers (The Wives of Henry VIII) and my Alison Weirs (The Six Wives of Henry VIII)- I know all about Henry and Ann- how hard could this be?! I thought.  But as I ventured further in, I started to lose confidence in myself.  After all, I’ve never seen A Man for All Seasons, and I couldn’t really remember Thomas Cromwell in all those biographies and historical fictions I’d read.  And so about 100 pages in, after an abrupt event in Thomas’ life, I decided that perhaps I needed to do a bit of Wikipeding and just get my head around the bare bones of his life.  I had only read a few lines before I realized that I didn’t want to do it this way- I wanted Thomas’ life to unfurl with its uncertainties, ambiguities, shocks and plans, just as it did for him, and just as Hilary Mantel wanted it to for her readers.

The Thomas Cromwell that Hilary Mantel gives us is on one level very recognizable- we grieve with him as he both draws comfort from his memories of loved ones he has lost; we relax with him in the comfort of his home- he is a flesh-out, human being.  But there are  facets of him that we cannot know though- the nonchalance about torture, the cold pragmatism by which people are dispatched; the unquestioned acceptance of Henry’s embodied sovereignty.

Thomas Cromwell was of lowly birth and yet he became the most powerful man in Henry’s court. Mantel gives only hints of how he achieved this, not in the form of a linear narrative, but in the flashbacks and learned knowledge that all of us weave together as experience  as we move through our own life trajectory.  We learn, then, of a violent childhood, an escape to Europe,  working as a mercenary and in the mercantile sphere as well,  violence committed- sprinkled through the novel, hinted here and there.

Mantel herself has described her technique as putting the camera on the shoulder of her main character.  The whole narrative is told from Thomas’ perspective, and she refers to him as “he” throughout.  This was disconcerting at times when there were other “he”s as well, but if you had to re-read once or twice, it was a way of reminding us as readers where we have been placed- behind Cromwell’s eyes, seeing what he sees, processing information through Thomas’ memories and experience.  It is also written entirely in the present tense, which I always find rather uncomfortable and suffocating, but it gives an immediacy to the writing.

This is part of a two-book endeavour, and I’m really looking forward to the second book.  There’s a terrific podcast of a presentation given by Hilary Mantel and Sarah Dunant at Birkbeck institute about history, fiction and historical fiction.  You can listen to or download it here

It’s obviously a very carefully researched book, and if you listen to the podcast you’ll hear about how she delineates the factual from the fictional.  But as well, she’s working through her own theories about events, agency, personality and historical forces, contingency and deliberation:

The fate of peoples is made like this, two men in small rooms.  Forget the coronations, the conclaves of cardinals, the pomp and processions.  This is how the world changes: a counter pushed across a table, a pen stroke that alters the force of a phrase, a woman’s sigh as she passes and leaves on the air a trail of orange flower or rosewater…