In Our Time (BBC) This episode The Gordon Riots has been hanging around on my phone since May this year. These anti-Catholic riots were triggered, the speakers suggest, by the French-British wars in Canada during 1780, which put the status of Catholics in British territories under the spotlight. Whipped up by Lord Gordon, head of the Protestant Association,  these riots reached their peak on 7th June 1780 as troops fired on the crowd outside the Bank of England. At a time when we’re debating legislation about religious discrimination, these riots started off as a protest against the relaxation of discrimination against Catholics under the Popery Act of 1698. Just saying.

Heart and Soul (BBC) Long time readers will know that I’ve spent some time in Nairobi, and so I was interested to listen to this podcast Religion and Climate Change in Nairobi, recorded in the Nairobi National Museum (I’ve been there!) Kenya is a very religious country and in this symposium, people of faith explore how that affects their response to climate change. I was interested to learn that in one language spoken in Nairobi, there is no single word for ‘climate change’, using instead a whole sentence like ‘things are getting hotter and nobody knows what to do’. Some speakers spoke about conspicuous consumption as a visible symbol that God approves of you, especially amongst self-appointed preachers. Some of the accents are fairly heavy, so you need to concentrate.

Revolutionspodcast After a lengthy introduction (8 episodes) into Marx and Bakunin, Mike Duncan finally embarks on the Russian Revolution. Episode 10.9 The Third Rome is a very quick skate over centuries of Russian history, up to the Romanovs. Episode 10.10 The Russian Empire looks at Peter the Great and Catherine the Great. So, 1000 years of Russian history in just two episodes. That’s the way to do it. 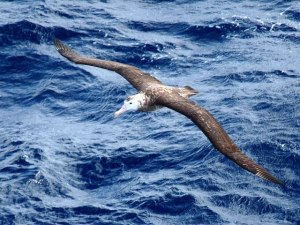 Offtrack (ABC) Gough Island is in the middle of the South Atlantic Ocean, 3000 km from South Africa and 3000 km from South America. It is a nesting place for birds- most particularly albatrosses- and is overrun by mice. This rather distressing episode  Where Giants Nest highlights the critically endangered status of the Tristan Albatross. You can find out more about Gough Island and its proposed mouse eradication program at https://www.goughisland.com/

This entry was posted in Podcasts 2019. Bookmark the permalink.