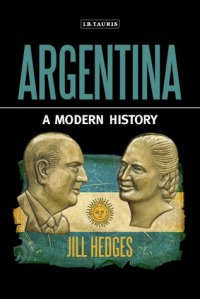 I purchased this book on e-reader to take with me to Argentina, which I was visiting at the time. As is the way of such things, I was so tired at night that I couldn’t concentrate enough to read it, and ended up finishing it in Colombia. [In turn, the book that I purchased to read about Colombia I finished reading in Chile!]. I wanted something readable and relatively current, with enough ‘back story’ to make a ‘modern’ history intelligible.

This book certainly fitted the bill. The author received a PhD in Latin American Studies from Liverpool University, and at the time of publication was Senior Editor for Latin America at Oxford Analytica since 2001. It is eminently readable, and does not assume much prior knowledge, which is just as well for me.

The book starts with the constitution of 1853, which still stands today. The first two chapters deal with national consolidation, and the ‘golden age’ of the Argentinian economy, and especially its relationship with Britain and emulation of European elite lifestyle. The rest of the chapters deal with the twentieth and early twenty-first centuries.

The book focuses on political players, most especially Peron and the generals who followed him during the dictatorship. She gives a really good explanation of Peronism (which exists in some form today) although she is critical of its populism and lack of philosophical/political principle. She points out that  the conditions under which leftist groups were ‘disappeared’ during the dictatorship started after Peron returned for a third term in the 1970s, and certainly her retelling of his political manoeuverings makes it difficult to space him on the political spectrum. While Peronism was explained well, the Dirty War was not as clearly described.

Perhaps because of this political narrative, the book also has a strong economic emphasis as well (are the two separable, I wonder, in any history or especially in this one?). The recurrence of broken promises and endemic corruption is depressing, as is the volatility of the economy and the democratic compromises it brings in its wake. This is very much a top-down analysis, focused on the political sphere, with little attention paid to social or cultural conditions.

I’m not in a position to take issue with any of its arguments – indeed, to even identify where her perspective differs from others’ – but I found it very readable and informative, and it enhanced my enjoyment of Argentina, even if I did finish it after I’d left it!