‘The Robber Bride’ by Margaret Atwood 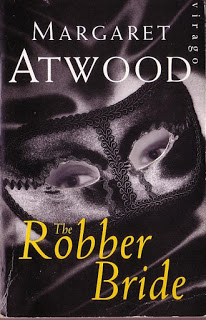 Set in Toronto, this book was published in 1993. Three female friends, Tony (Antoinette), Charis and Roz are having lunch together when another woman enters the restaurant: Zenia, a mutual ‘friend’ who was supposed to have died several years earlier. Each of these women has her own history with Zenia, a charismatic woman who variously lied, cajoled, blackmailed and bullied her friends.  The title comes from a Grimm Brothers fairytale ‘The Robber Bridegroom’ where a young woman was threatened by her betrothed and his gang of men.  In an inversion of the fairytale, Zenia steals the husbands and partners of her friends.

After a too-long opening section which places the three women at the restaurant, the book then turns to each of the friends in turn. Tony is a military historian, a rare woman in a male-heavy academic field, who sees the world through her historical consciousness of memory, chance, inevitability and choice. Charis (formerly Karen) is a floaty-hippy type woman with a gruelling family background. Roz is a successful business woman whose own family background is shadowy.  Zenia finds her way into each woman’s vulnerability and uses it against them. While doing so, she engineers the break-up of their relationships with their men.

The real skill of this novel is Atwood’s full-blood rendering of each of these women in turn. In effect, it could be three books in one. They are all equally well-developed as characters, and their relationship with Zenia is plausible. The same cannot be said of Zenia, who remains enigmatic and depicted, in a rather over-wrought style, as the personification of evil. That’s the only truth about her: all the rest is lies and deception.

I was satisfied with neither the beginning nor ending of this book.  For the first fifty pages I kept thinking “Oh, just get on with it” and the ending was too quick and not entirely believable.  But the middle part – and that is where the crux of the book lies- is really well written.

It’s hard not to see this book in the context of The Handmaid’s Tale (1985) and Cat’s Eye (1988), both of which also deal with women’s cruelty to other women, although the cruelty here is at an individual, personal level rather than social or institutional.  It raises good questions about how feminine aggression is manifested, and how other women respond to it. It’s interesting to consider how the story would differ if a man preyed on the wives of his male friends, and how they would respond to his perfidy.

This entry was posted in Book reviews, The ladies who say ooooh, Uncategorized. Bookmark the permalink.

2 responses to “‘The Robber Bride’ by Margaret Atwood”