‘Unbridling the Tongues of Women’ by Susan Magarey 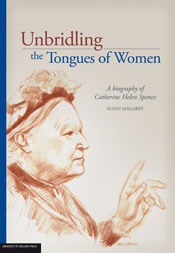 Available as free PDF at https://www.adelaide.edu.au/press/titles/spence/

Catherine Helen Spence observed once that law and custom had “put a bridle on the tongues of women”. When in 1871 she actually read her own lecture to the South Australian Institute, instead of handing it over to a man to read, she said she did so “to make it easier henceforth for any woman who felt she had something to say to stand up and say it”. (p. viii)

“Stand up and say it” was exactly what she did over her long life.  As a novelist, journalist, board member, preacher, political figure and suffragist, she put her words before the public.  Magarey has chosen her title well in this biography, which highlights the breadth of Spence’s interests and why she well deserves the praise bestowed on her at her 80th birthday party as “the most distinguished woman they had had in Australia”.

Magarey’s second edition starts with a new introduction where she corrects and supplements some of the observations that she made in her original 1985 text.  I suppose that an introduction to a new edition does need to go at the start, so that your antennae can start quivering when you come across a point that she later corrected. But I must say that I found the introduction far more interesting after I had read the book.

The book does not follow a straight chronology as such, because it slices her life thematically. In the Introduction to the original 1985 edition, she gives an overview of Spence’s life, starting with her arrival in Adelaide in 1839, just after Adelaide’s establishment as a Wakefieldian colony. She quickly traces Spence’s career, claiming her as “Australia’s first feminist” – not so much in terms of political action, but through her ability and determination to break into the national conversation.

Chapter 1 ‘Acquiring a room of her own’ backtracks on Spence’s childhood, starting with her parents’ marriage in Scotland and the family emigration to Adelaide.  After her father died, Catherine was spurred to earn money through teaching to help support her mother and siblings.  Although she had two proposals of marriage, she decided not to marry because of the independence and pride earning her own money: a decision which opened up opportunities that might not have otherwise been open to her. But it was an inheritance through her aunts back in Scotland that made it possible for her mother to purchase the house in which Catherine could have the ‘room of her own’ that Virginia Woolf saw as crucial to a writing life, living alongside her mother (with whom she had a very close relationship) until her mother’s death.

It was in her ‘room of her own’ that Catherine began her novelistic career, which Magarey deals with in Chapter 2 ‘The line of least resistance’.  Having not read any of Spence’s fictional work, I found this chapter a little opaque, although I am impressed and fascinated by Magarey’s summary two of her later stories.  Handfasted seems to promote a particularly liberated view of marriage for the time, and A Week in the Future, set in 1988, seems to be a loosely-disguised fictionalization of Spence’s political ideas.

Chapter 3 is titled ‘Faith and enlightenment’, and it was for this chapter that I read the book, as I’m giving a presentation (oh, the presumption!) on Catherine Helen Spence at our Unitarian fellowship this coming Sunday (details below). Spence was a Presbyterian, but she was ‘converted’ to Unitarianism, a verb which does not sit comfortably with Unitarians today.  She was brought to Unitarianism through contact with her friend Emily Clark, and was attracted to Unitarianism’s emphasis on rationalism and faith. Spurred by the example of Martha Turner, the Unitarian minister from Melbourne and the first woman preacher in Australia, Spence was a regular speaker at the Adelaide Unitarian Christian Church.  Her addresses from the pulpit covered a wide range of topics, even if the minister at the church sometimes felt that the politics expressed were not appropriate.

Although she complained that the Adelaide Unitarian church was rather insular, she (and other members of the congregation) moved into secular philanthropic enterprises as an expression of their spirituality. In Chapter 4 ‘Edging out of the domestic sphere’ Magarey addresses the philanthropic work in which Spence was involved which built on her Unitarian connections. In particularly she deals with the Boarding Out Society which took children from impoverished homes and placed them with more respectable working class families.  It’s a strategy that does not sit well with our attitudes today, and Magarey bats off (rather stridently, she admits in the introduction to the new edition) the criticisms of other historians including Kay Daniels who see the scheme as a form of middle class imposition onto working class culture.  It was Spence’s philanthropic work that was to lead to her speaking at the International Congress of Charities, Correction and Philanthropy in 1893 in Chicago,  conducted alongside the World Fair, bringing her to an even wider international audience.

Chapter 5 ‘Learning for the future’ traces through Spence’s work in education, noting the evolution in her views over time from her own work as governess and school-owner, through to her support for the state-run secondary Advanced School for Girls. She wrote a textbook that was used for many years ‘The Laws We Live Under’.

Her public writing is dealt with in Chapter 6 ‘Round woman in her round hole’ where Magarey emphasizes the range of topics that Spence dealt with in her newspaper columns, many of which bore her byline. As she notes in the new introduction, Spence is now recognized as a formidable economic thinker and was an advocate for greater economic equity- although not uniform distribution of wealth.

However, it was her political and economic thinking that led her to become a passionate (to the point of obsession) supporter of proportional representation, dealt with in Ch 7 ‘Prophet of the effective vote’. Her quest for ‘effective voting’ was taken up by the Reform Movement that emerged in South Australia in the 1890s which included the Land Reform League, Single Tax League and Fabians, among others.  She stood for the Federal Convention to discuss the coming federation of Australian states. Although she was unsuccessful, she was the first female political candidate in Australia’s history.

Largely because of her obsession with proportional representation, she came late to the agitation for women’s suffrage, as seen in Chapter 8 ‘The New Woman of South Australia: Grand Old Woman of Australia’.  However, once she turned her attention to it, she was warmly embraced by women’s groups who had been working towards it for years because of her strong and formidable reputation on all sides of politics.  After it had been achieved in South Australia (the first state in Australia), she maintained a strong interest in the suffrage question right up until her death.

When you think about it, there are just so many ‘firsts’ in her life.  I take my hat off to her, and I’m proud of the Unitarianism that I share with her. I wish that she was still there on the $5.00 note as she was in Australia’s bicentenary year.  I take my hat off to Susan Magarey too. This is an engaging biography of a woman with a long and varied life. I’ve been enjoying reading Magarey’s other writing on Spence too, most particularly an essay ‘The Private Life of Catherine Helen Spence 1825-1910) in Body and Mind: Historical Essays in Honour of F. B. Smith.

And my talk? It’s on Sunday 18th March 2018 at 2.00 p.m. at the First Unitarian Universalist of Melbourne fellowship, 506 Elizabeth St Melbourne, opposite the Victoria Market. You’d be very welcome to attend.

And I’ll put this review towards the tally for the Australian Women Writers Challenge 2018.

4 responses to “‘Unbridling the Tongues of Women’ by Susan Magarey”