A couple of days in Marysville

It’s been a rough month or so, and we decided to head away for a couple of days. I’m keen to head back to Tasmania this year but Steve’s U3A commitments preclude going away for more than a week. So instead we decided to head up to one of my favourite places, Marysville.  When I was a child, we used to stay there for a week each September at Marylands Guest House.  We went up there again in about 2005, by which time Marylands was somewhat out of our price league, having been rebadged as Marylands Country House.

Marysville was almost obliterated during the Black Saturday bushfires of 2009, along with all its guesthouses.  Although there has been a lot of rebuilding, there is now only one Guest House as such, complete with tennis court, billiard table, table tennis table, lounge, library etc.  That’s what I wanted: not a B&B, not a motel room, but a proper guest house.

El Kanah was originally one of the ‘Mary’ chain of fake-Tudor guesthouses, called Mary Meadows. There’s a picture of it in its Mary Meadows form here.  During the 1970s it was taken over as a Christian enterprise and renamed El Kanah. In fact, my best friend Micheline and I stayed there after end-of-year exams one year.  You can see the pre-fire El Kanah here and some interior shots of the guesthouse here.  You can see photos of El Kanah in the aftermath of the fires here.

The present-day El Kanah is still a Christian undertaking, but no questions are asked about your religious affiliations when you book in.  I don’t know how they would have reacted if we declared our  Unitarian and an agnostic leanings, but they were very pleasant and friendly people. The Billy Graham video, the wafting sound of hymns and ‘blessings’ didn’t bother us. It’s certainly a large undertaking, and I wonder quite frankly how they can afford to run the place.  It’s not cutting-edge in its architecture, but it’s very comfortable, and I’m glad they kept the curved windows at the front to reference the old El Kanah (Mary Mount). It’s a patchwork bed cover sort of place and it only has instant coffee.  If it’s real coffee and modern decor you want, go down to the Vibe instead. 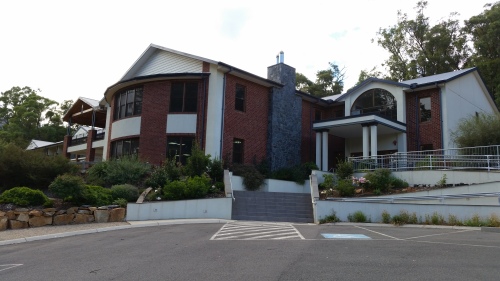 View from our balcony

Anyway we had a lovely few days, ambling down to the town for our real coffee and a read of the newspapers, kicking back and reading a whole book in one day in either their very comfortable library or out in the garden, and driving around to the various forest walks.

We drove past where Marylands used to be. When we visited on Cup Day a few years back, there were plans to subdivide the site.  I’m rather pleased that the driveway  lined with oak trees is still the same as it used to be, with no sign of building yet.

We drove up to Lake Mountain, a popular cross-country ski-ing location. Of course, there was no sign of snow at all on a 25 degree day. We were interested by the Bjarne K Dahl memorial boardwalk which was constructed before the trees all began growing back.  This image on the information board from October 2013 shows the outlook at that time, with the surrounding mountains clearly visible.  There’s been so much growth in the intervening five years that it is unrecognizable. 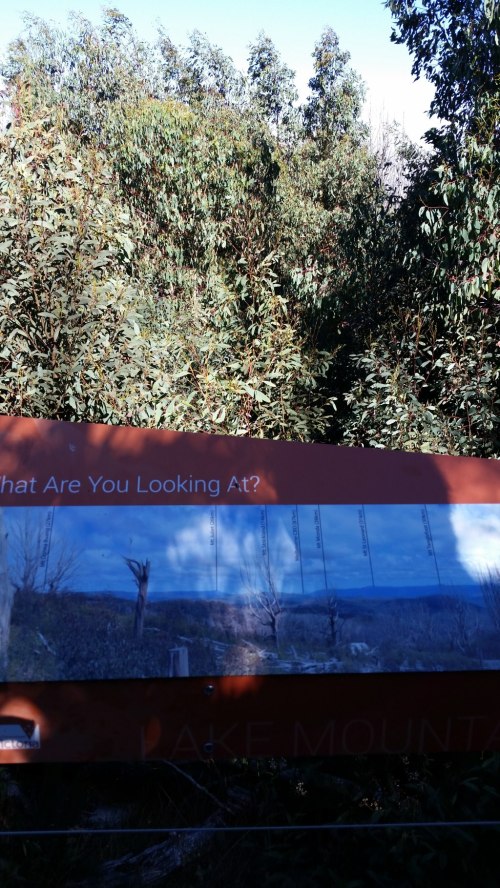 That’s not to say that there’s no evidence of the bushfire.  Particularly on the tops of the mountains, there is little regrowth yet. 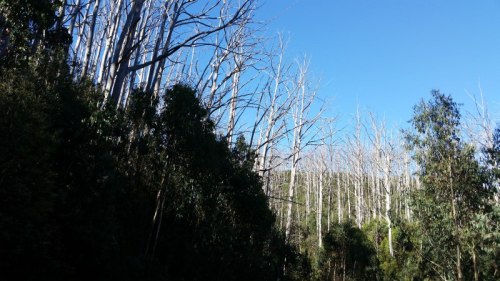 I was interested to learn that the reason that Lake Mountain has large grassed expanses is because the mountain ash trees did not have a chance to regenerate after the 1926 fires before they were burned again in 1939. The rapid succession of bushfires disrupted the usual seed-dropping cycle that allows mountain ash forests to recover from fire.

We visited Cambarville, which had been a timber town during the 1940s, following the 1939 bushfires.  It is now an empty site, with a few interpretative signs laying out the school, mill and ‘main’ street. 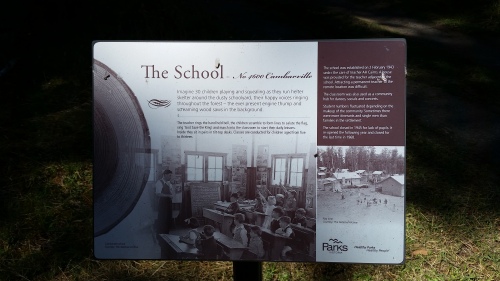 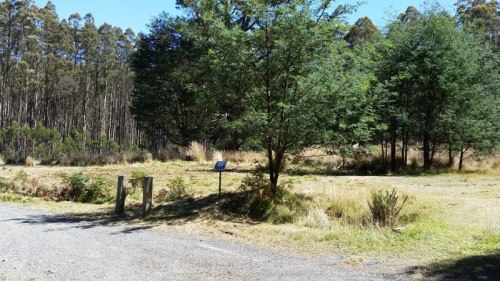 It, too, was burnt out during the Black Saturday fires, although it was long gone by then.  It must have been a pretty bleak place to live, with no electricity, mud and inhospitable terrain.

The waterfall walks were beautiful.

Even though there has been lots of money poured into Marysville to ‘save’ it, there’s still something ghostly about it. I know that we went up mid-week during summer, but it feels as if the rebuilt town is too big for itself.  The Vibe hotel and convention centre dominates the main street, and the rebuilt bowling greens do not have a bowling club to use them. There are very few ruins any more, but many footpath crossings lead only to empty blocks.

The autumn leaves will turn soon.  All of the oak trees in Murchison Street are flourishing, and Marysville will be just as beautiful in autumn as it was before the fires. And it does have a real guest house.