‘The Catch: The Story of Fishing in Australia’ by Anna Clark 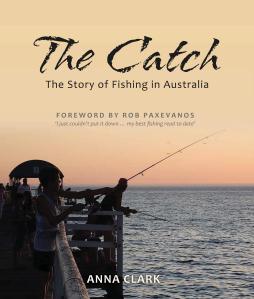 In a beautifully presented book, the “story” (but really, the “history”) of Australian fishing is told by historian and fellow fishing enthusiast, Anna Clark. This shared love of fishing permeates the text of this  book, not just in the “we” language that Clark deploys, but also in the carefully crafted ‘fisher’s-eye’ paragraphs that commence each chapter. Here, for example, is the start to the chapter ‘Early Industry’ that takes us right into the boat with a single fisherman in his small boat:

The boat glides out of Albany and sails across the sheltered waters of Princess Royal Harbour. A breeze skims across the bay and fills the sails- just enough to push the little boat along into the incoming tide to set the nets.  There’s plenty to catch here, and the fisherman fills his woven baskets with herring, whiting and bream, with a few skipjack and pike thrown in for good measure.  But there’s not much point chasing the big hauls, since the fish go putrid after a day or two ashore- and anything left over has to be buried. (p 49)

Or here we are on a modern commercial fleet ship:

The engine’s running and its gentle throb can be felt through the humming deck. Filleting knives are neatly lined up by the cutting boards near the ship’s bow, someone’s hosing off the blood from this morning’s catch and there’s a constant and slightly unpleasant smell of fish.  In the centre of the deck is a little hatch with a lid. Inside, a steel ladder drops down to the icy hold below. It’s dark and filled to the brim with neatly stacked ten-kilogram boxes of fish fillets, snap frozen by the boat’s powerful compressor. They sit waiting to be unloaded and taken away by refrigerated truck to the city’s markets. (p.97)

As well as capturing the tone of the narrative, these two opening paragraphs encapsulate many of the themes of the book: the joy of fishing, the deceptive abundance of fish, the problem of wastage and storage and the effects of technological change.

Published by the National Library of Australia, this lavishly illustrated book shares the high production values of its other volumes, and draws generously on the holdings of the library in photographs, maps and diagrams.

The book starts with indigenous fishing, which was described at length by Cook and Banks to illustrate the abundance of the eastern coast, and which was captured in many of the early drawings and paintings of New South Wales.  The amputation of the pinky finger on Eora fishergirls made it easier to use a line for fishing. It attracted the attention of these early commentators and was clearly shown in convict artist Thomas Watling’s drawing of Dirr-a-goa in the 1790s, while the term for the amputation, “Mal-gun”, was noted in William Dawes’ notebook of translations of Eora words.   However, as Clark notes:

While early colonial sketches and paintings give wonderful snapshots of Indigenous fishers, they do so from a distinctly European perspective.  Written accounts are similarly revealing – and we should be grateful for the faithful record of fishing practices and winning catches they’ve produced- but we can’t forget that these early settlers viewed Indigenous society through a distinctly colonial lens. (p. 17)

Indigenous perspectives on fishing come through the presence of scar trees where bark has been excised to build canoes, the remnant fish traps in rivers, shell middens and through indigenous carvings and paintings of fish.  This indigenous perspective is not relegated to the obligatory opening chapter, but instead continues through the book, with the continuation of fishing at riverside and coastal Aboriginal missions and Traditional Owners claims on traditional fisheries.  As she points out, fishing participation rates among in the Indigenous population sit as high as 92% in some communities, and it is an integral part of connection to country and cultural knowledge. (p. 132)

The abundance of fishing was reported by Captain Cook, and the First Fleet was well equipped to take advantage of it. However, Governor Phillip was less effusive, reporting that some days the fish were there- other days not. The photographs in the book – taken specifically to celebrate the size  of the catch – highlight abundance, but the text tells another story as fishing grounds are fished out and one species of fish collapses after another.

Another theme is the ongoing contest between competing interests. Colonial gentlemen craved the manly sport of fly-fishing and introduced European species into Australians waters with sometimes catastrophic results. (I knew about the European carp, but to be honest, I didn’t realize that the trout was an introduced fish- shows how little I know!) The government supported the establishment of commercial fisheries and the storage and infrastructure requirements to transport fish to lucrative markets, but in response to political pressure, it has more recently championed recreational fishing and set aside no-go zones to increase stock numbers. The emergence of Senators representing recreational fishing interests is likely to keep this political contest alive.

I did find myself wondering who this book is aimed at.  Its appearance just prior to Christmas is, I’m sure, well-planned. Its copious and beautiful illustrations mark it out as a coffee-table book, but the text ranges beyond the ‘whoa! look at that!’ response to a photograph of a big fish. Its author, Anna Clark, is well known in academic circles for her work on public history and history teaching and she brings to the book an awareness of sources and a keen sense of finding history in the everyday.  Most importantly, she brings her own love of fishing to the text, and I think that this is what fishers will respond most to in this book.

I’ve included this book in the Australian Women Writers Challenge.

2 responses to “‘The Catch: The Story of Fishing in Australia’ by Anna Clark”