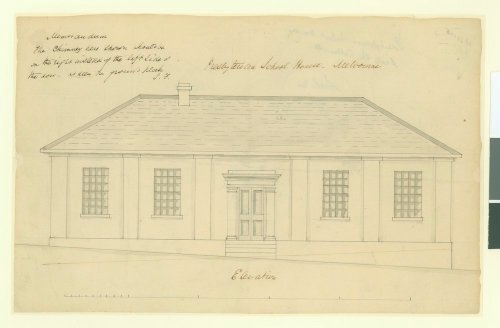 Presbyterian School House (Scots School House) by Joseph Burns. It was erected at the north-west corner of Collins and Russell Street by December 1839 and used for services until Scots Church was built. It was for some time the only building available for public meetings, like this first meeting of the Debating Society.  It was demolished in 1870. Source: State Library of Victoria

On 13 October a meeting was held in the Scots School House to discuss the transformation of the Debating Society, which had previously been meeting in private homes, into a larger and  more substantial organization. In Sydney, the Debating Society was a branch of the Mechanics’ Institute, and had use of their lecture room and library.  Although there was a nascent Mechanics’ Institute in Melbourne,”their temporary committee room is too circumscribed to afford accommodation for the debates being held therein; the use of the books in the library is the utmost that could be offered, and this, no doubt, would be cheerfully conceded.” (PPG  13/10/41)  As a result, the Melbourne Debating Society decided to open itself up to the public as an independent organization.

Mr John Stephen was called to the chair, and the rules were discussed. There was some controversy over the rule which prohibited reference to scripture in the elucidation of argument, but Mr Darling, who proposed the original rule was sticking by it.  Then Rev James Forbes, the Presbyterian minister (in whose rooms they were meeting, after all) said that religious controversy should always be avoided in a Debating Society, but that he didn’t disapprove of referring to scripture in support or confirmation of an historical fact. He then proposed an amendment that quotations from scripture should be excluded in the debate (i.e. reference was allowable, but quotation was not). His motion was carried. A great number of people enrolled their names as members.(PPG 16/10/41)

On 20 October the first public debate was held, again at the Scots School House.  There were twenty members present, plus visitors. The question for debate was  “Did the motives which incited Brutus and his associates in the assassination of Julius Caesar originate in patriotic desire or personal feeling”? Quite frankly, I wouldn’t know where to start. Neither, it seems did the good men of Port Phillip, in the opinion of the writer from the Port Phillip Gazette:

One thing was evident; that neither of the parties, pro or con had sufficiently studied the question, as to bring the points which most materially bore upon the subject in aid for its elucidation. This system should not be permitted to obtain, if the society is to prosper. [PPG 23/10/41]

Oh well, better luck next Wednesday, when the topic was: “Whether America or any other nation is likely ultimately to supplant Great Britain”?

You might remember the fuss about the Private Assembly Ball back in June. Well, another Private Subscription Ball was planned for October and, according to the Port Phillip Gazette, it all went very well:

PRIVATE ASSEMBLIES. The first ball of the season took place last night at the Freemasons’ Lodge-Room in the Exchange Hotel.  The attendance was numerous, considering the unsettled state of the weather, and the arrangements made reflected the greatest praise upon the stewards of the evening. The ball room was most tastefully decorated, under the supervision of Mr Buckingham. The refreshments were of the first-rate description. Quadrilles, waltzes and Gallapades divided the entertainments into their due proportions, to which the exertions of the orchestra contributed the full share of mirth and activity.  The supper room was ornamented with flags of various descriptions. Altogether the entertainment appeared to afford ample satisfaction to all parties; and the tout-ensembled afforded a gratifying specimen of colonial gaiety, with cannot be too often [applauded?] [PPG 23/10/41]

The drapers of Melbourne took advantage of ball season and the upcoming visit of Governor Gipps to spruik their wares:

ADVERTISEMENT- THE GOVERNORS VISIT.  The proposed Visit of the Governor, accompanied as he will be by his Lady, will cause a degree of gaity in the Provice which has seldom before occurred.  With the Governor’s visit a series of BALLS, ROUTES AND SOIREES &C will follow in its train, and Melbourne will be for the period of their stay relieved from its usual monotony.  The ladies of Melbourne will of course be prominent in their display of FASHIONALE [sic] TASTE for which they are so much admired, and which upon this occasion they will doubtless show to the best advantage, proving alike to Sir George as to Lady Gipps, that the ladies of Port Phillip can justly appreciate the beauty of British Manufacture.  Cashmore & Co desire to encourage this amiable emulation on the part of the ladies of Port Phillip, have obtained, and they will open this morning A CASE OF FANCY GOODS which are expressly provided for this enlivening occasion.  Early application is necessary, as this is the only case they have of those articles [PPG 20/10/41] 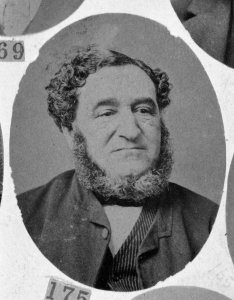 As it turned out, Lady Gipps didn’t accompany Sir George, so all that competition to impress was rather wasted.

A Coroners Inquest into infanticide held during this week provides an insight into the jobs and living conditions of  the servant class in Melbourne, and most particularly those of recently-arrived immigrant women from Ireland.

A baby was found in a cesspit servicing three separate houses in Little Flinders Street. Joseph Stewart, an” eating house manager” said that he had two female lodgers in his house, but they were married people and their husbands resided with them. Neither had been ill and nor had any alteration taken place in them since residing there. He had had a female servant who left last Sunday, discharged for disobedience of orders in going to chapel without permission:

…she passed as a single woman, and went by the name of Catherine, she was a stout woman and had very good health; she is as stout now as ever was; she lived with witness for about two months and a half; think she took up her residence in the back yard after she left.

The District Constable reported that the woman, Catherine Rigney had left Stewart’s house immediately after she heard of the cesspool being empties and had run away, taking a portion of her clothes and saying that she would be back for the others.  She was called to the stand and said

I am a servant and arrived on the 16th July in the Royal Saxon; I went to live with Stewart the latter end of that month; he discharged me on Sunday because I went to mass without asking his permission.

Her former shipmate Catherine Banquo took the stand; said that they had travelled out from Cork together and that there was no alteration in Catherine Rigney since she first knew her. She was a servant to Mr Robson, of the London Inn and Catherine had called on her and said that her master had discharged her because she went to mass; she slept that night with her, she seemed a little distressed in being out of a situation.

Dr Cussen, who conducted a post-mortem, testified that it was a full-term baby. The jury after a short consultation returned a verdict of ‘Wilful murder of the child, by some party or parties unknown’.

But then, some hours after the inquest, a woman known by the name of Bridget (Biddy) Lapping,who had resided in Stewart’s house for two months before being turned out for drunkenness,  informed that Stewart had, a day or two previously, taken an infant and a bag of wool “removed from a mattress, for reasons which delicacy forbids us to mention” and thrown them into the privy at the rear of his house.  Stewart was arrested and taken to the watchhouse [PPG 20/10/41]

The following morning when he was brought before the police court, she said that she had not the slightest recollection of making any statement, and if she did so it must have been under a state of intoxication.  She said that she knew nothing whatever of a child being put into a bag containing some hair and being thrown into the cesspit. But several witnesses said that she had said so.

There is one circumstance which must strike everyone who has taken the most cursory glance at what transpired relative to the case… it is clear that the woman stated she saw Stewart put the child into a bag containing some hair, and she then enquired of Clifford (who was employed to clean out the place), which he found first, “the hair or the child?” Clifford said “the hair”. It is an extraordinary circumstance that nothing relative to the hair came out in evidence at the inquest; therefore, unless the woman was well acquainted with the facts, she must have arrived at the circumstance of the hair being with the child, by intuition. Not the slightest clue has been obtained of the mother of the child, which is somewhat extraordinary.  The man Stewart, of course, in consequence of the gross prevarication of the woman, has been discharged.  The woman Lapping turns out to be a prisoner of the Crown and according to her own showing, has been living a life of gross infamy.  The Bench have turned her into government and ordered her to jail. [PPG 23/10/41]

The mother of the child was never identified.

Between the 15th and 21 October there were fresh breezes, strong winds and gales- it certainly sounds like our changeable spring weather!  There was fine weather up until 19th; the 20th was the hottest day at 82 degrees (27.7) before rain on 20th and 21st.  Certainly Georgiana McCrae was enjoying the weather, noting the thermometer at 82 on 16th “a delightful day”.  On 20th she noted “Another delicious day. I feel all alive!” and recorded 84 degrees on her thermometer on 21st. The lowest temperature was 41 (5 celsius).