‘The Natural Way of Things’ by Charlotte Wood 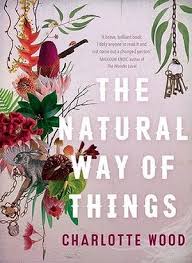 As it happened, I was exactly half-way through Charlotte Wood’s book The Natural Way of Things when I learned that it had won the Stella Prize.  I was already engrossed in it: staying up way past my bedtime to read just a few pages more. After it won the Stella I felt that the noble thing to do was to stay up until 1.00 a.m. this morning finishing it so that I can return it to the library for others to enjoy.

Although is ‘enjoy’ the right word? Probably not, because this is a bleak book set in outback Australia where young women who have been publicly shamed through the media and corporate power networks have been incarcerated and ‘removed’ from society’s gaze and conscience.  Real-life parallels spring to mind: Monica Lewinsky, the St Kilda School Girl, women on reality TV.  In its depiction of the paradox of bleak openness and yet claustrophobia, it reminded me a little of Janette Turner Hospital’s Oyster ( a book that I felt didn’t receive sufficient recognition) and of course has resonances with Lord of the Flies and other such books.

What would people in their old lives be saying about these girls? Would they be called missing?…Would it be said, they ‘disappeared’, ‘were lost’? Would it be said that they were abandoned or taken, the way people said a girl was attacked, a woman was raped, this femaleness always at the centre, as if womanhood itself were the cause of these things? As if the girls somehow, through the natural way of things, did it to themselves. (p. 176)

The book is divided into three parts, tracing the progress of the year Summer, Autumn and Winter, and the book is so grueling in places that it felt as if the action took place over a much longer period. There are no numbered chapters as such, and the sections vary between present and past tense.  The book opens from the drugged, disoriented point of view of one of the captives and this confusion takes some time to clear for the reader as well, as the reason for their incarceration emerges.  There is throughout the sense of suspended menace- not enough to make the book unbearable, but sufficient to compel you to keep reading in horrified fascination.  It’s no coincidence, I’m sure, that it’s this horrified fascination that we often feel when watching a public shaming occurring throughout media.

In awarding the Stella Prize, the Stella Prize judges described it as ‘a novel of – and for – our times’ and ‘a riveting and necessary act of critique.’  I’m mindful that this book has been awarded in a climate of heightened awareness of domestic violence and misogyny, but I don’t think that topicality is its only virtue. I’ve found myself thinking about the book all day, and I think that its bleakness and power will make it memorable and uncomfortable in the future, much as Cormac McCarthy’s The Road does in a different genre.

It’s good, and it deserves the acclaim it’s receiving.

I’ve reviewed this as part of the Australian Women Writers Challenge 2016.

One response to “‘The Natural Way of Things’ by Charlotte Wood”