‘Their Eyes Were Watching God’ by Zora Neale Hurston 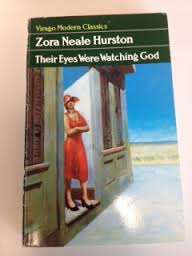 One of my resolutions this year is to read more of the books I already have on my shelf (I even committed to the TBR challenge!). So far, I have failed miserably because this is, I think, the first book I’ve read from the groaning shelves.  I must have bought it secondhand at some stage because I’d heard of Zora Neale Hurston, although I was under the mistaken impression that she was a historian in the 1960s.

So the first surprise was  that Their Eyes Were Watching God was a novel. The second surprise was that it was written in 1937 and not in the 1960s as I had supposed.  The third surprise- and the one that discomfited me most- was the use of dialect in the dialogue. Let me give you an example, drawn at random:

“You know man’s de time Ah done thought about dat mahself. He gits on her ever now and then when she makes mistakes round de store.”

“Whut make her keep her head tied up lak some ole ‘oman round de store? Nobody couldn’t git me tuh tie no rag on mah head if Ah had hair lak dat.” (p.79)

The book is very dialogue heavy, and it’s all like this. How, at a time when ‘black-face’ is now unacceptable, should a modern reader react to this? Actually, not just a modern reader: many African-American activists at the time found it confronting too.  Here’s Richard Wright reviewing her in 1937:

Miss Hurston voluntarily continues in her novel the tradition which was forced upon the Negro in the theatre, that is, the minstrel technique that makes the “white folks” laugh. Her characters eat and laugh and cry and work and hill; they swing like a pendulum eternally in that safe and narrow orbit in which America likes to see the Negro live: between laughter and tears…In the main, her novel is not addressed to the Negro, but to a white audience whose chauvinistic tastes she knows how to satisfy.  She exploits that phase of Negro life which is “quaint”, the phase which evokes a piteous smile on the lips of the “superior” race.  (http://people.virginia.edu/~sfr/enam358/wrightrev.html)

However, Hurston, as an anthropologist, rejected this characterization of her work. She was intent on documenting and celebrating black culture through its language, humour and speech patterns, and some thirty years after its publication,  it is this aspect of the book that has inspired feminist and Afro-American women writers in particular. For myself, I found that I could let go of my misgivings about the way the dialogue was depicted once I ‘heard’ it in my head like a film soundtrack, rather than reading the words on the page.

Janie, the main character of the novel, has three husbands. She was encouraged to marry the much-older Logan Killicks by her grandmother, who as a former slave feared for a grand-daughter unprotected by a man. In a flush of infatuation, she leaves him for Jody Starks, a pushy entrepreneur, intent on developing a black community under his own leadership as mayor. But when Jody belittles her, she leaves him too for Tea Cakes, a younger man who she sees as the love of her life and soulmate, although he draws her into a peripatetic life far below that she had enjoyed as the mayor’s wife. Over time, though, this relationship also becomes an emotional rollercoaster, but she does not waver in her love for him.

I can see why writers like Toni Morrison and Maya Angelou have been influenced by Hurston’s writing, because Janie is a full-realized, nuanced female character, far beyond the stereotype that the dialogue evokes in my mind.  The book is strong in its structure, with a frame story within which the plot moves confidently.  It is a book entirely within a black and female consciousness, with hints of magical realism.  No wonder it has been designated a ‘modern classic’ and well worth taking off the bookshelf.

This entry was posted in Book reviews, TBR Reading Challenge. Bookmark the permalink.