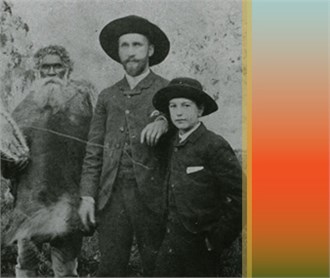 The “other side of the frontier” was just down the yard or as close as the bed shared with an Aboriginal woman (p. 23)

As we can see in this excellent exhibition, the frontier could also be just across the river. The de Pury family ‘took up’ (to use the euphemism) land adjoining the Coranderrk reserve where William Barak and his cousin Simon Wonga led a community of Daung wurrung and Wurundjeri indigenous people in an independent and largely self-sufficient community managed by European John Green. This exhibition displays photographs, letters and artefacts donated to the Yarra Ranges Regional Museum by the wine-growing de Pury family that reveal  the neighbourly interaction between Barak in particular and the neighbours across the river.

The exhibition tells two intersecting stories: those of Barak and the Coranderrk community, and that of the de Pury family and winegrowing generally in the Yarra Valley.  At times the stories come together in photographs and paintings, but there is also confluence of the narrative in de Pury’s presence on the ‘Board of Enquiry into the future of Coranderrk instituted by the Central Board Appointed to Watch Over the Interests of Aborigines in the Colony of Victoria’, which in effect brought the community to a close.  De Pury had initially declined to sit on the board, but later did so, in a reminder of the power relations that constrained ‘neighbourliness’, after all.

Coranderrk was a particularly visible indigenous community which attracted photographers and artists and which in turn churned out souvenir paintings and carvings  for purchase. One of the objects that fascinated me most was a painting that Barak did of the de Pury vineyard, long after Samuel de Pury had left for Europe, on the back of which he wrote:

This is a beautifully curated exhibition in a well-funded, purpose-built building.  The exhibition was of particular interest to me because my family ‘took up’ a Crown Land grant at Chum Creek, near Coranderrk on what would have been assuredly a tribal resting-place and food source on the river flats of the Chum Creek at much the same time that Coranderrk was established. The two events are, I’m sure, related – a fact which I find uncomfortable.

A handsome book has been produced to accompany the exhibition. There’s a very well-presented exhibition upstairs on the Yarra Valley, and a very good cafe downstairs overlooking the park.  The exhibition is on until November, so don’t miss it- it’s beautiful weather for a trip to the hills!

This entry was posted in Exhibitions. Bookmark the permalink.