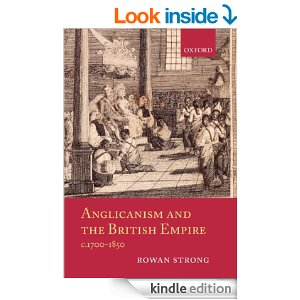 When (or if) you think about missionary activity in the British Empire during the nineteenth and twentieth century, it’s likely that you’ll think of the Church Missionary Society,  the Evangelicals  or groups like the Clapham Sect, noted for their lobbying for the abolition of slavery.  Missionaries seem such a very mid-19th century phenomenon. This book, however, argues that the Anglican Church’s missionary activities commenced long before this, right back almost to the Glorious Revolution in the late 17th century.

Strong is careful to delineate early in his introduction that he’s not writing about missions as such:

It is important, at this juncture, to explain what this book is not about. It is neither a history of missions, or of the Anglican missionary societies whose publications are used here; nor is it a history of the colonial development of the Church of England in North America, Bengal, Australia or New Zealand. It is also not a history of the colonial encounter between English or British colonizers and indigenous colonized peoples in the various colonies under scrutiny here, except as these occurrences found their way into the sources used here to construct the public discourse of the Church of England regarding the English, and then British Empire. This work is, rather, a history of the public views of both metropolitan leaders of the Church of England in England, and of Anglicans in these British colonies, regarding the church and the empire, and about the colonizing and colonized populations to be found there. These views were presented in the public sources examined here, and therefore derive from both the centre and the peripheries of empire- that is, from England and the various colonial contexts over this period. (p. 7)

The two earliest missionary organizations associated with the Anglican Church were the Society for Promoting Christian Knowledge  (SPCK) established in 1698 and the Society for the Propagation of the Gospel (SPG), established in 1701.  Thus, they pre-dated the Great Awakening of 1740   and the development of the Church Mission Society (CMS)  in 1799 which, although also Anglican, had a strongly Evangelical bent.  Strong’s emphasis in this book is on the SPG in particular and the fundamental interpretative themes of empire it provided for English metropolitan and colonial Anglicans.

He identifies a number of continuities over the 150 year period that he deals with in this book.  First was a sense of Providence: that God intended Christianity to be universal, and that it was God giving England all these territories.  Believers had a duty to God to ensure that the peoples of these God-given lands heard the Gospel.  It was part of a “commercial theology of exchange” (p. 67) and a just return to God for the riches that England had derived from her colonies and plantations.   Second, it was necessary to civilize these heathens before you could Christianize them.  Initially there was a degree of tolerance and even admiration for the natural religion of Native Americans in particular but if they had their own religion, why did you need missionaries?  And so, it became necessary to civilize them to Western practices first, then Christianize them later.  Third, it was very important for the Church to keep an eye on the colonists and settlers as well, who were likely to slide into infidelity and degeneracy once they were in the colonies.

There were disjunctions, though.  The SPG was comfortable with slavery, seeing is as a given, ordained and permitted by God.  In fact, the SPG was even bequeathed its very own plantation in Barbados.  It preached moderation in the treatment of slaves, but not emancipation and it acquiesced in the planters’ rejection of baptism lest their slaves expect that it lead to actual instead of merely metaphorical freedom.

The relationship of Anglicanism and Empire changed over time.  After the loss of the American colonies, the British Government became more conservative, implementing aristocratic military rule and emphasizing social hierarchy, racial subordination and landed patronage.  An established church, closely integrated with the government was part of this conservative trend and  the ‘Crown, Church and Constitution’ approach was writ large in Upper Canada especially.  The atheism of the  French Revolution had frightened the government and church, and Anglicans developed a new fellow feeling towards French clerics who had been dispossessed and persecuted (even if they were Catholics).

It was a mistake, it was now recognized, to prevent an ‘episcopal’ (ie. Bishop-based)  church from having its own bishops, and expecting them only to look back to the mother church in England.  This was true not only of settler colonies, but India as well.  A Bishop was installed in Bengal, India in 1814, thus confirming Anglican supremacy in a colonial setting.  The new model was for the Anglican Church to be the established English Church in the colony, even if there were other smaller denominations present.

But by the late 1830s-early 1840s  the Anglican hierarchy realized that this renewed state/church alliance would not last.  Not only had there been the Catholic Emancipation Act and the Sacramental Test Act of 1829 which removed the barriers to Catholics and Dissenters, but the 1832 Reform Bill also enfranchised the unlanded middle class, many of whom were Dissenters.  In 1841 the Colonial Bishoprics Acts provided a fund whereby the Anglican Church could establish its own dioceses and churches  where-ever there were significant numbers of Anglicans, without waiting for the permission of the government.

It took a while for this new approach to the relationship with government to catch on amongst the colonial bishops though.  Bishop Broughton in New South Wales in particular, was very much of the old paradigm, keen that the Anglican church retain its dominance both politically and socially.  His emphasis lay on improving the morals and education of white ex-convicts and settlers, with little attention paid to indigenous peoples.  But when Samuel Marsden, an Anglican minister, established the evangelical-influenced Church Mission Society in NSW in 1825,  the Anglican church itself moved into new areas.  Even though it might not have been his preference, Bishop Broughton had to operate within the new paradigm of church governance and an independent relationship to the state. In New Zealand, however, the CMS had been active in missionary activities to the Maori and white whalers since 1814, and the New Zealand Bishop Selwin was always part of the new paradigm.

Strong draws heavily on the lectures delivered annually by prominent clergy  on 15 February to commence the annual meeting of the the Society for the Promotion of the Gospel at St.Mary-le-Bow in central London.  The sermons were published along with the annual reports of the Society which incorporated portions or summaries of reports submitted by missionaries across the Empire.

The book is organized geographically (North America, Bengal, New South Wales) although the argument about the changing relationship of the Anglican Church to the state proceeds chronologically.  Because of the geographical approach, there is a degree of repetition when these Anglican worthies preach the same observations (need to civilize indigenous people before you could Christianize;  the moral decline of degenerate colonists; God’s providence in giving England the Empire) first for one colony, then another, and another.  I found the chronological argument more compelling, and felt that it tended to become smothered by all these sermons which are quoted rather generously.

It was rather strange for me reading a book that draws on much the same historiography as I am accustomed to (Catherine Hall, Linda Colley) but with a strong religious-history bent.  Nonetheless, for me, it helped me to draw a stronger distinction between Anglican evangelicalism and the ‘older’ type of Anglicanism  exhibited by Bishop Broughton.