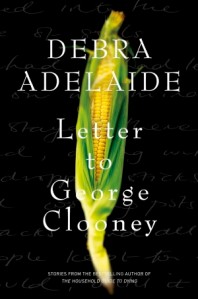 I see that Debra Adelaide’s book of short stories Letter to George Clooney has been shortlisted for Kibble literary prize for an established female writer.

I can think of many reasons why a collection of short stories should be nominated for major literary fiction prizes, but I also still have niggling reservations. What about the ho-hum stories in a collection? Do the constraints of the genre render particular criteria impossible? But having said that, this book really does deserve the highest accolades and recognition. It really is good.

As I have said many times before, I find it rather difficult to review a collection of short stories. The curatorial act of choosing one story to include over another, and the ordering of the stories within the volume suggests to me that in a collection of short stories there is another creator at work: the editor. In this case, Debra Adelaide is an editor herself, so perhaps she ‘owns’ that aspect as well.

Looking at the book as a whole there seemed to be several stories that deal with writing, and stories of a similar theme presented together- or am I imposing this order onto it? To me, the first two stories deal with writing; the next two with rituals. The fifth story ‘The Harp Society’ and the sixth ‘Glory in the Flower’ involve performances of some sort, while the seventh ‘Chance’ and ‘The New Millenium’ address ways in which technology have affected our lives. ‘The Pirate Map’ and ‘The Moon Will Do’ are both administrative challenges of a sort- the first to find the ATO office, the second to complete the instructions on a chain letter.  ‘Harder than your Husband’ and ‘Airlock’ both involve work places of different types. The final story, and the one that gives the collection its name absolutely stands alone.

Even in a collection of the quality of this one, there are one or two short stories that stand out. For me, there were two. The first, ‘Chance’ had me laughing maliciously, having dabbled in the waters of middle-aged internet dating myself. It’s the story of a woman away on a romantic weekend with a man she has met on the internet and the awful, intimate messiness of plunging early into relationships as we tend to do.

The second standout story is  ‘Letter to George Clooney’. I don’t want to talk about at all because to do so would diminish it. It is brilliant. Read it for yourself.

I have posted this review on the Australian Women Writers Challenge site.