There’s much ado in Melbourne at the moment about the Winter Masterpieces Exhibition at the National Gallery of Victoria, featuring over 100 works from the Museo de Prado Museum in Spain.   We decided to let the hype subside somewhat, and turned our attention northwards to the Bendigo Art Gallery which has its own exhibition of internationally-sourced paintings on at the moment. The exhibition is called “Genius & Ambition”, featuring paintings from the Royal Academy of Arts in London between 1768-1918 and it is on until 9th June 2014.

It’s in the art galleries of Victoria that you realize the huge cultural legacy of the gold rush, most particularly in the regional galleries of Ballarat and Bendigo.   The Bendigo gallery was founded in 1887 (Queen Victoria’s 50th jubilee) when it took over a polychrome red-and-cream brick building originally occupied by the Bendigo Volunteer Rifles brigade. Other galleries were added to it over time, with a large addition to the rear. For this exhibition, tickets were sold from the grand Capital building next door. It was previously the Masonic Temple- designed as “one of the grandest Masonic Temples in the colony”. I’m sure that it would have been. 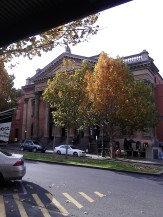 The very grand Capital centre that abuts the art gallery. It was the former Masonic Temple. 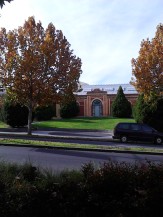 The original building of the Bendigo Art Gallery

There’s a rather cute installation in the courtyard- a grass covered rotunda (well, fake grass actually)

I must confess that I wasn’t particularly clear on what the Royal Academy was. I’d seen ‘R.A.’ after the names of noted painters, and I know that ‘exhibited at the Royal Academy’ was a claim to distinction amongst Australian painters craving international recognition. From this exhibition, I learned that the academy was started by King George III in 1768, with Joshua Reynolds as its first president. There could only be 40 members at any one time, with another 40 associate members. In a large painting of the founding 40 members you can just see two women, suitably hidden away behind a chair at the rear of the crowd of artistic luminaries. Still- they were there.

The Academy included a training school and as one might expect in such an environment where there would be a certain amount of patronage and networking, there were several paintings of the members themselves and the artistic scholars going about their work (including one purporting to show the young William Blake in class).

It was only once I started looking at the paintings that the wide scope of the time period 1768-1918 came clear to me.  It’s  a very clear expression of Britishness over that period. The exhibition, over several rooms, was roughly chronological, and you could see the influences of Impressionism and the Pre-Raphaelites as these artists became accepted into the Academy. One section featured reference books from the R.A. library which influenced the technical skills in art (e.g. photographs of a horse galloping- the first time that galloping could be broken down into discrete time-stop motion; or a colour wheel). While interesting, I felt this part was a bit unnecessary because it deflected attention from the works themselves. The final room was turned over to Australian artists who travelled to London where they either attended the R.A. as students, or showed their works in the frequent R.A. exhibitions. There was a limit of three works by any one artist in any one exhibition, and several Australian artists had works accepted over a number of years. There were several women painters that I had not been aware of.

I am nearly always struck by one or two paintings, and in this case it was Charles Sims’ Clio and the Children. Not so much for the painting itself, which is rather ordinary (in fact, looking at the odd proportions of the children very ordinary), but for the back-story. Charles Sims often painted outdoor scenes showing women and children, and this 1913 painting of a group of children listening to Clio, the goddess of History reading from a scroll is typical of his work. In 1914 his eldest son was killed in battle. Sims returned to the painting and daubed the scroll in blood, which changes the whole meaning of the painting.

Here’s a better view of it:

The other painting was ‘After Velacquez’ by Sir John Everett Millais, who was the youngest student ever enrolled at the Royal Academy school at the age of eleven (although he was not admitted to the RA itself until the age of 34). It references Valacquez, but the sleeves in particular and the red hair of the young sitter are the mark of the Pre-Raphaelites.

I have to say, though, that this was a particularly dim exhibition. Perhaps it was a condition of loan, but you could barely see some of the paintings in the Stygian gloom, let alone read the panels. I used one of their Large Print booklets, and judging by their popularity amongst the patrons – not all of whom needed Large Print – you really do need to question the size of the font and the colouring of text panels. You need to be about 30 cm away to be able to even decipher the text, then push through the crowd also wanting to read in order to actually see the painting.

I don’t really like using headphones at an exhibition if I’m there with someone else because it makes it such a solitary experience. You comment on a painting then realize that you’re talking to yourself because your companion can’t hear you. If you’re the one using headphones, by the time you realize you’re being spoken to, and mutter “Eh, what? Hold on!” (usually in an inappropriately loud voice) as you fumble around with the controls on the audio device, the comment seems so banal that it was barely worth making.

Lunch, a stroll up and down the expensive antique shops along View Street, a visit to the Op shop for less expensive old things, then off to Maldon for a coffee once our lunch had gone down. I was very disappointed to learn that the National Trust has sold the Penny School. Shame on them.