‘Too Much Happiness’ by Alice Munro 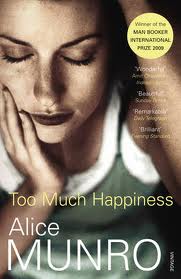 Alice Munro was awarded the Man Booker International Prize in 2009 not so much for any particular book but for the entire body of her work over several decades. In 2013 she received the Nobel Prize for Literature.  I must admit to having only read one Alice Munro (Lives of Girls and Women) about fifteen years ago, and that was a novel rather than a collection of short stories, a genre for which she is more commonly celebrated.   I seem to be rather re-thinking my response to short stories (wink to Whispering Gums) and reading more of them on my own initiative, but this was book group selection, which raised its own challenges.

Most of the stories in this collection are set in or around Ontario, which has its own appeal to me now that I’ve been there. Interestingly, the only one with a markedly different setting is the final and longest one which is set in late 19th century Russia, and it is this rather (to my mind, disappointing) final story that gives the collection its name. Even though the action occurs in different decades over the last 40 years and her narrators include men and women, there is a middle-class, softly liberal leaning to the narrative voice in most of the Canadian stories.   A number of motifs arise repeatedly: women seem to wear kimonos over their underwear; first wives are usurped by younger women, and there is a curious preponderance of devilled eggs. I was wondering if there was a talisman link between them, but if there was, I couldn’t find it.

There is, however, an edge to these stories which are at the same time domestic and yet transgressive. There are disturbed children, sexual deviants and murderers here amongst the minutiae of North American small town and suburban life.

Her endings are rather curious and abrupt, but this didn’t worry me. In fact, I resisted the rather decisive, pat ending in ‘Dimensions’, otherwise one of the strongest stories in the collection and chillingly evocative of some recent crimes that have occurred in Melbourne in the last few years. She has certainly mastered the art of the narrative time shift, even in the short story. Sometimes I wonder if writers restrict themselves to short stories because this is so hard to do in a longer novel, but it’s obviously not the case here. She packs so much skill into 20-30 pages.

I find it very hard to review a collection of short stories. There is no point in summarizing the different stories beyond an aide-memoire for myself (perhaps not an altogether unworthy rationale), and a short story is shrivelled by being reduced to its bare bones. As I mentioned, this was a book group selection, and similar issues arose during our discussion as well. We seemed to spend a lot of time in silence, flipping through a short story to remind ourselves what it was about. Through our discussion I did, however, find nuances and alternative meanings that hadn’t occurred to me reading the stories alone.