‘The Ventriloquist’s Tale’ by Pauline Melville 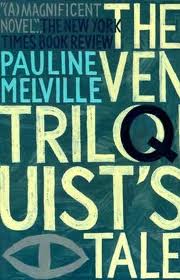 All stories are told for revenge or tribute.  Take your pick (p.9)

So says the ventriloquist, the narrator (‘You can call me Chico. It’s my brother’s name but so what‘)  who appears in the opening and closing pages of this book. He is an unsettling, jeering presence who adds nothing to the book as a whole and yet manages to subvert it as well.

Ah, secrecy, camouflage and treachery.  What blessings to us all.  Where I come from, disguise is the only truth and desire the only true measure of time. (p.7)

His tale, sandwiched between the prologue and epilogue, is told in three parts. The first and final parts are the framing story of Chofy McKinnon, an Amerindian married man who embarks on an affair with Rosa Mendelson , a British academic who has travelled to Guyana as part of her research into Evelyn Waugh.  While interviewing an old woman in London who had worked as a governess for the McKinnon family in what was British Guiana at the time, Rosa had been told that Evelyn Waugh had stayed with the McKinnon family, and that she had even cut his hair sixty years earlier.

Poor man.  He was so out of place.  He sat out in the open that first day and that was when I gave him a haircut.  Nobody really knew what the hell he was doing there…. For all that he was looking for material, he missed one story that was under his nose…If you find any of the McKinnon’s they will be able to tell you about Mr Waugh.  The other business had to do with Danny McKinnon and one of his sisters.  Her name was Beatrice…I don’t know why Mr Waugh didn’t write about that.  He certainly knew about it. (p. 49)

And so Rosa travels to Guyana to track down any McKinnon descendants.  There she encounters Chofy, who was estranged from his wife Marietta and son  Bla Bla. His aunt Wilfreda, sister to Danny and Beatrice knows the story too, but she doesn’t want to tell it.

The second and largest part of the story concerns Danny McKinnon and his sister Beatrice sixty years earlier.   Scots-born Alexander  McKinnon had arrived in British Guiana at around the turn of the twentieth century, married two Indian sisters and had several children to both sisters, including Danny and Beatrice.  When Danny and Beatrice fell in love, the villagers accepted it as something that happened occasionally.  A brother-sister love affair was even referenced in the tribal myths and stories about the sun and moon.  The author, Pauline Melville, takes a similar approach in writing about the relationship: sensual and evocative but neither condemnatory nor sensationalist.  The Catholic priest, Father Napier, however, cannot abide the relationship as he pursues the couple to bring God’s punishment on them.  He is not the only one punished.

I heard about this book when it was reviewed by M D Brady at Me, You and Books as part of her Global Women of Colour reading challenge.  A book about Guyana! I’m attracted to reading about Guyana/Guiana because it’s part of my own research into Judge Willis for my thesis.   I’m sure that very few readers of The Ventrioloquist’s Tale thrilled to Melville’s description of Georgetown, but  I certainly did.  Given that I have never seen Georgetown and probably never will, this captured what I have gleaned from my reading and can see in my mind’s eye:

Chofy had not visited Georgetown often.  From his first visit as a young boy, the city had made him uneasy.  It was not just the geometrical grid of the Georgetown streets, the parallels, squares and rectangles which disoriented him after the meandering Indian trails of his own region, but as he walked over the dry brown clumps of grass along the verges, he experienced the unaccountable sense of loss that hung in the spaces between buildings renowned for their symmetry and Dutch orderliness.

From early on in its history, there had been something pale about the city of Stabroek, as Georgetown was known in the eighteenth century.  It was as if the architects and builders had attempted to subdue that part of the coast with a geometry to which it was not suited and which hid something else.  The labours of men had thrown up a city made of Euclidean shapes, obtuse-angled red roofs, square framed houses on evenly spaced stilts, delicately angled Demerara shutters, all constructed around transparency, emptiness and light. (p. 35) 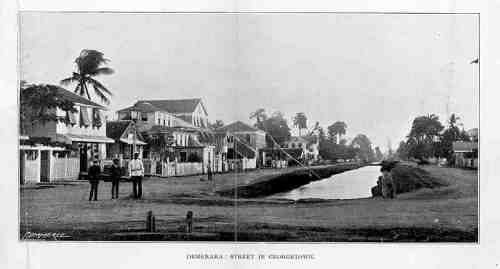 This book is a delight in itself, quite apart from any post-colonial theorizing imposed onto it.  But it is a robust enough text to withstand heavy-duty academic analysis (see, for example here)  and my admiration for the text grew even stronger when I read about the connections between the author’s own family history and the text here and in this Guardian interview with the author.  Melville has not just taken her family’s real-life connection with Waugh but has, I think, taken her revenge, as the ventriloquist suggested, on Waugh’s simplistic and blinkering dismissal of his time in British Guiana and Brazil.

I had borrowed this book out of a desire to read literature set in British Guiana. I was given much, much more. Brilliant.