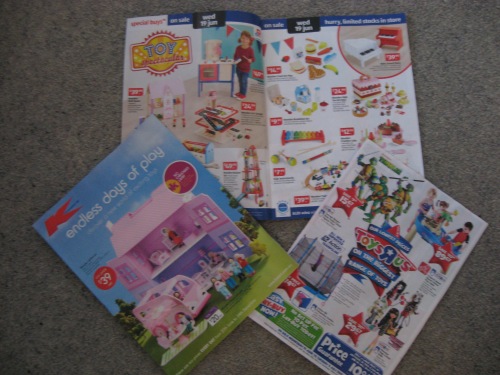 Well, well- the toy catalogues are here.  It must be mid-winter.

I’ve noticed that the toy catalogues always appear in the middle of the year, harking back no doubt to an earlier time when we actually saved for things. I remember that the newsagent in Upper Heidelberg Road Ivanhoe used to have a big toy sale in the middle of the year and ‘the mothers’ would line up along the footpath, waiting for the shop to open.  Presents would be put on layby and would be wrapped in brown paper and stored above the shelves, up near the roof with the surname written on the parcel with texta.  All the second half of the year they would sit there.  You could see the names from child-height below, and wonder if there was something there for you.  A win-win situation, you’d have to say: a present could be bought on sale and paid off gradually with no tricky Santa-hiding problems, then whip along on Christmas Eve and pick it up!

So is there any such thing as lay-by any more?  I see that the K-Mart catalogue has a sticker on the front that tries to make the absence of a service a virtue: 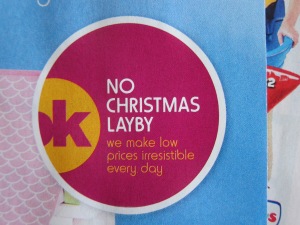 No need for Layby! Low prices every day!

On the other hand, ToysRUs do still have layby, but there’s a catch! 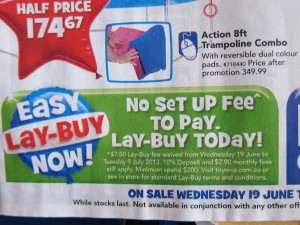 They’ll waive the $7.50 layby set up fee but the 10% deposit and $2.90 monthly fee still apply- and there’s more conditions to see in store! So- set-up fee, monthly fee on top of the repayments- hope it’s a good special!  I do note that it’s ‘lay-buy’ (with an emphasis on the transaction) rather than ‘lay-by’ (with an emphasis on the storage location).

But of course we don’t wait for things these days, do we?  If you want it, buy it! I’m sometimes saddened by those ‘Nothing to pay until 2016!’ advertisements when I think that whatever was purchased in such haste will probably be shabby and thrown out by 2016 when the repayments start.

It all seems a long way from gazing at a brown-paper parcel on the toyshop shelf. And of course, perhaps there’s no thought of Christmas at all- perhaps it’s just toys for the sake of toys.

This entry was posted in Things that make me go "hmmmm". Bookmark the permalink.

One response to “Toy time!”