Yet another hot day, so off to the National Gallery of Victoria to enjoy their relative coolth.  Melbourne has had seven consecutive days of temperatures higher than thirty degrees, with at least another three to come.  What happened to my ‘four-seasons-in-one-day’ city?  It’s all getting a bit tedious.

Anyway, off to the NGV International to see their current exhibition Kings Over the Water.  This time, I’m writing about an exhibition that has months to run- until December 2013- instead of writing about it two days before (or even after) it has closed, as is my wont.  So, there’s a good chance that it will still be on when you read this. 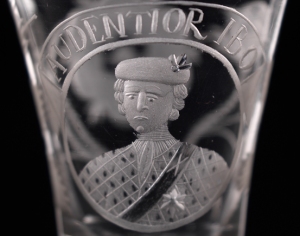 In 1688 James II, the Catholic King of England, Scotland and Ireland fled to France, and William and Mary of Orange were installed as monarchs in the Glorious Revolution.  The Glorious Revolution is now, and certainly was during the nineteenth century, held up as one of the cornerstones of British parliamentary democracy.  But many of the supporters of James II did not accept the legitimacy of the William/Mary ‘package’, and for seventy years held fast to the hope that the Stuarts would return.  In 1745 it seemed that this was to come to fruition when ‘Bonnie Prince Charlie’  (the grandson of James II) led an insurrection that culminated in defeat at  the Battle of Culloden .

Seventy years- my, that puts the Coalition’s snit at not forming government after the 2010 election into the shade.  It was dangerous to publicly avow loyalty to the Stuarts, and so Jacobite (the latinized form of ‘James’) sympathizers formed into clubs where they would toast loyalty over a bowl of water- thus toasting The King Over the Water  (i.e. in French exile).  The heavily engraved glassware they used in these toasts was decorated with etched symbols, and while at first glance the glasses seem similar to other glassware in vogue at the time, they were an act of fragile subversion.

Some have the actual image of the Pretender- although such glasses are particularly rare.  More subtle were those draped in Jacobite imagery: the six flowered rose with two buds (symbolizing James and his two sons); an oak tree with a daffodil (Charles II sheltered in an oak tree during the Civil War and the daffodil symbolized Wales and the Prince of Wales); the six pointed star; and engravings of Latin mottoes.  Some of them had Maundy money embedded within the stem of the glass: the threepences dispensed to the poor on Maundy Thursday before Easter by the real King (in their view) in 1687, the year before the Glorious Revolution.  Others had the Jacobite anthem engraved onto them in tiny script.

It was here that I felt rather let-down by the curators of this display.  Mention was made that the Jacobite anthem was the fore-runner of the National Anthem today.  But I gather from Lord Wiki that this is not necessarily the case as the Hanoverians (i.e. the supporters of William/Mary and later the Georges) and the Jacobites each had their own versions of the same song.  I found one version of the Jacobite anthem,  halfway down the page, sung to something similar to the National Anthem today: 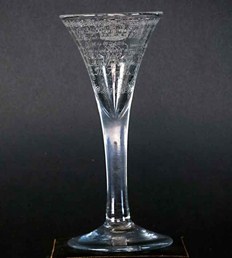 This ‘Amen’ glass sold for 43000 pounds last November in UK.

So what was written on the glass on display at the NGV?  The writing was tiny, and it was on the side facing away, so you needed to squint through the glass to see it written backwards on the other side. I found myself wishing that either the glass was turned around, or better still it had been magnified with a transcription of the anthem provided in a panel on the side.

Part of the subtlety of this subversion- and make no mistake, treason had its consequences- was that the symbols were hidden within the decorative fashion of the day.  Six-petalled roses were a common decoration and not subversive in themselves- but if they had two rosebuds beside them, they were.  Placing money in the stem was quite common, but it depended on the date shown on the coin. One of the symbols was only visible from the bottom, when the glass was being drained- and again I found myself wondering why the curators didn’t make it more visible by putting the glass onto a mirror so that you could see the bottom.

I found myself wishing for a time line or a family tree or some other graphical depictions of the history of the period.  There is an explanatory panel at the beginning of the display, but it was more a memory-prompt than an explanation.  For those of us old enough to have done ‘The Kings and Queens’ in history at school, the memory is getting a bit fuzzy;  those who were spared the long chronologies of such arcane knowledge, a bit more explanation wouldn’t go astray.

Still, it’s a good exhibition and one that makes you appreciate the wealth of the NGV’s holdings.  They’re beautiful glasses in their own right, very carefully and tastefully displayed, with a fascinating back story as well.