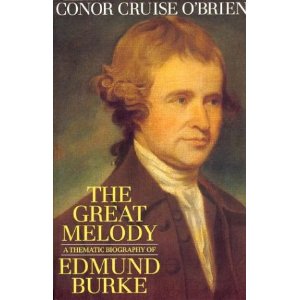 The Great Melody: A Thematic Biography and Commented Anthology of Edmund Burke

I’m not in the habit of reading 600 page tomes about eighteenth-century history in bed before sleep, and I must admit that it took me about six weeks to get through this book.  The eighteenth-century is a foreign country to me in a way that the nineteenth-century isn’t, and I have a towering pile of other books that I should be reading instead- so why was I reading this?

One reason was the subtitle “A Thematic Biography”.  I find it hard to clearly say what my own writing is- I can say what it isn’t  (not a straight biography; not a judicial biography) but somewhat harder to say what it is.  I wasn’t quite sure what a “thematic biography” is, or how it differs from any other biography.

The second reason was that I keep coming across quotations from Burke, or people who quote him.  Edmund Burke (1729?-1797) was a statesman, orator, writer and member of the House of Commons. He was known as a “Rockingham Whig” at a time when there were not so much political parties as constellations of politicians who would cluster around a particular individual- perhaps similar to the “Petro Georgiou Liberals”- not a party in its own right, but a political flavour exemplified by one person. I know that he came to be associated with conservatism and yet I’ve heard him described as a classic liberal as well.  On consulting my Penguin Dictionary of Quotations, I find him well represented (more than George Bernard Shaw and Macaulay; nowhere near Milton, Pope and Shakespeare!) although it seems that he didn’t say that “All that is necessary for the triumph of evil is that good men do nothing” even though it is often attributed to him.  What he did say was

When bad men combine, the good must associate;else they will fall, one by one, an unpitied sacrifice in a contemptible struggle. (Thoughts on the Cause of the Present Discontents).

I’m aware of ‘Burke’s Law’ that could be used to remove colonial officials and -importantly for my work- judges from their colonial posts.  I knew that Burke was a great orator, and that he had been bitterly critical of the French Revolution right from the start….and that’s about it.

O’Brien identifies this book as a thematic biography because it is not so much about Burke as a man – certainly his intimate family life, his marriage, his friendships are almost completely absent- as about the four main political issues on which he became known as spokesman.  O’Brien picks up on two stanzas of a W. B. Yeats poem ‘The Seven Sages’

Harried, and Burke’s great melody against it

and argues that ‘it’ is ‘ abuse of power’. Burke saw, and deplored, abuse of power exemplified through Britain’s declaration of war on the American colonies, the Catholic question in Ireland, the widespread admiration of the early days at least of the French Revolution, and in the failure in Parliament of his attempt to impeach Warren Hastings in India.  It is a thematic biography in that the chapters circle between Ireland, America, India and France in a roughly chronological fashion, darting back in several places to revisit the idea of the ‘great melody’. The book assumes familiarity with these issues, and the minutiae of British Parliamentary Politics  and I struggled with the Indian section in particular.  I do now, however, know what Barry Jones was getting at with the Governor General of Bengal question on Pick-a-Box

O’Brien suggests that, despite identifying himself as a member of the Anglican communion of the Church of Ireland, Burke actually followed his mother’s Catholicism, and although claiming a Quaker school as the site of  his first education, he may have instead attending a Catholic hedge-school.  Burke’s sublimated and unacknowledged Catholicism, he argues, was the lens through which he decided his stance of the issues of American, French and Indian political events, even though he never clearly identified it as such.

The second theme that runs through this book is O’Brien’s own dispute with historians, particularly those influenced by Louis Namier who have questioned Burke’s significance and highlighted the inconsistencies in his approach.  He certainly doesn’t hold back against these “pullulating insects of trivialising calumny” (p. 306) and he does so far too often.  At times he draws a very fine line.  He criticizes, for example, Lucy Sutherland and others of the Namier school for conflating  “documentary gaps” and “silence”-

But the two are not the same; not by any means.  A documentary gap often reflects a period of particularly intense communication. The people concerned are not in correspondence, because they are in daily conversation…What an eerie place, …is eighteenth century London, once it has undergone Namierisation! This is a world in which no one ever talks to anyone else.  All communication is in writing.  The spaces between the bouts of penmanship are filled with silence. Anything that doesn’t get written down doesn’t happen. (p.333)

Yet O’Brien himself makes much of Burke’s silences, especially over Ireland, both as a revealing political stance and as a sign of Burke’s inner psychological tension.  I’m a bit uncomfortable about extrapolating from the utterances and silences of the public record in Burke’s own writings and in his Parliamentary speeches-  ‘performances’ for a specific political and strategic purpose- and psychological explanations of the inner man.  However, in trying to capture the inner man O’Brien is constrained by his material, given that Burke himself destroyed all personal papers, and this work is rooted deeply in the public arena.

The other part of the subheading is “commented anthology”, and much of the book quotes directly and at length from Burke’s own words.  There was a great deal of this, and while bristling with lacerating observations and wit in places, there was also a lot of high-flown rhetoric that flew right past me propped up in bed with my eyelids drooping.  Alas, I found nothing about ‘Burke’s Law’ but I do think that I have a more nuanced perception of Burke and his influence both on parliamentarians at the time and later.