‘Life in Seven Mistakes: A Novel’ by Susan Johnson 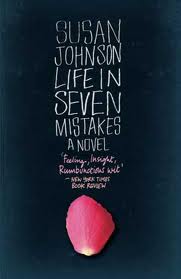 All the world’s a stage,

And all the men and women merely players;

They have their exits and their entrances’

And one man in his time plays many parts,

His act being seven ages.

I’m not sure that it was a particularly apposite quote, and it complicated rather than illuminated the title of this book, which for the life of me I can’t quite make fit with the story itself.    Doesn’t matter really: I enjoyed it anyway.

There are two intertwined narratives in the book.  The first, written in the present tense, is told from the perspective of Elizabeth, a middle-aged ceramicist on the verge of her first international exhibition. She has travelled up to Surfers Paradise with her third husband Neil and her children to spend Christmas, and to celebrate her parents’ 50th wedding anniversary four days later. Her  brother and his wife and  children have done the same.     Ah- families- you’ve gotta love them, don’t you- with all that jealousy and love and rawness and spite mixed in together.  There they are, in their parents’ large air-conditioned penthouse at the top of a Gold Coast hi-rise: Bob the patriarch a boorish, loud bully; Nancy his tense, controlling,  hyper-critical wife; Robbo the younger brother who just rolls with the punches and his rather intrusive and opinionated wife, and a brood of disengaged, self-absorbed grandchildren.  Then there’s  Elizabeth, our entree into this family,  who despite her own status as mother, artist and adult woman feels as if she turns into a little girl again around her parents.  Her brother Robbo is spot on about her:

You’re pathetic.  Still bleating about what Mummy and Daddy did to you when you’re almost old enough to retire.  Next year you’ll qualify for one of those over-fifty retirement places.  Are you still going to be blaming your parents when you’re seventy? Life’s too short, Liz (p. 108)

Then there’s the missing youngest brother, Nick who is in jail after a long history of drug use with all the betrayal, defiance and hurt that this brings.  He’s barely spoken of, only briefly encountered in the book,  and yet a presence nonetheless.

How did this family get to be like this?  The other narrative strand takes the young Bobby and Nancy as they meet in the 1950s, begin courting, marry, have children, become increasingly affluent as Bob (who drops the ‘Bobby’) moves up the corporate ladder  into private schools, prestige cars, Surfers Paradise penthouses etc.  But all of this comes at a price- expectations of gratitude and performance- and Bob becomes angrier at the world and the sense of entitlement that he himself has fostered for himself and his family; Nancy tries to make herself and her children smaller targets;  and the three children in their own ways negotiate this spreading emotional mine-field.

Both narrative threads were strong and well-made, and I didn’t find myself regretting when I turned the page to find that the narrative was about to switch again.  The dialogue was particularly good, and the author obviously has a sharp, observant eye.   The ending had an emotional authenticity, at least for this middle-aged reader at the time I am in my own life, although other readers may judge it a cop-out.  The book had the groundedness and edge of Christos Tsiolkas’ The Slap, and felt a little like Jonathan Franzen’s The Corrections down under.  This is perhaps a little flippant: all three of these books have a truth at their core about loyalties, judgment and the emotional mess of just living.  All three are more than the “human comedies” that their blurb writers have pigeon-holed them as.

Oh, but that title- it’s turning me into a numerologist.  There’s seven main characters- is that it?  Or is it, on p. 106 when Elizabeth lists all the things that people tell her not to be take too seriously: love, art, university, jobs, children, her parents, life itself–  there’s seven of them too.  I wish I hadn’t been so hung up on looking for a reference to the title while reading, and I wish I could let it go now too, but Elizabeth-like, I can’t.  Perhaps that’s the mark of a good book- that it turns YOU into its protagonist??!! ( now that’s  a dangerous thought….)

Some other blog reviews:

Felicity Plunkett’s review in The Age

The Australian review by Jennifer Levasseur