Next to the Melbourne Town Hall in Collins Street is the original site of the Mechanics Institution. This is one where a little bit of imagination is required.  The Melbourne Mechanics Institution was established in 1839 with the police magistrate and later sub-treasurer William Lonsdale as its first President and the Superintendent of Port Phillip, Charles La Trobe as its first Patron.  Willis himself does not seem to have had anything to do with it, which is a little surprising.  In a nascent civic community, as early Port Phillip was, this is precisely the sort of organization in which a resident Judge could express his philanthropy and civic presence.  As it was, many of the men who were to become his vocal opponents were involved, and perhaps this explains his distance?

The building now on the site is the much-loved Atheneum theatre and library.

The edifice, early in 1843, was occupied by the members.  It was a substantial two-story brick building, some feet from and above the street level.  It was reached by several steps, and during the winter season the footway and street approaches were in a terrible state of mud and puddle.  Yet in those primitive times the progress of the erection was regarded with much interest, and not only the people, but the newspapers actually felt a pride in it as one of the coming constructive wonders of the Antipodes.  One of the later thus gushingly referred to it: “The Hall of Arts is nearly complete, and will be ready for occupation in the course of a few days; the size, arrangements, and architectural proportions of the building will make it, when finished, the noblest edifice in the Province.”  On the ground-floor were the Library and Reading-room, and for years the Town Clerk had his official quarters in another portion of the building.  The meeting place for the Town Council was upstairs in the large room.  This larger apartment or “hall” as it used to be grandiloquently styled, was one of the most historical places in Early Melbourne, for here were held some of the most important gatherings in Port Phillip- social, charitable, and political.

You can see a picture of the original Mechanics Institution  here.

There’s plenty more information on the website of the Melbourne Athenaeum Archives– well worth a look!

Posted in Glimpses of Willis

A pilgrimage around Willis’ Melbourne

Richard Holmes, one of my favourite biographers, once wrote:

The past does retain a physical presence for the biographer- in landscapes, buildings, photographs, and above all the actual trace of handwriting on original letters or journals.  Anything a hand has touched is for some reason peculiarly charged with personality… (Footsteps of a Romantic Biographer p. 67)

He describes a sort of ‘haunting’

an act of deliberate psychological trespass, an invasion or encroachment of the present upon the past, and in some sense the past upon the present.  And in this experience of haunting I first encountered- without then realizing it- what I now think of as the essential process of biography.” P. 66

As I walk around the streets of Melbourne, I find myself trying to reimagine the town that Willis would have seen.   Probably more so than in other cities, much of it was engulfed by the gold rush and its associated prosperity that followed some seven years after Willis left to return home to England.  Nonetheless, it’s a haunting that often accompanies me as I walk around my home town, and I’d like to share it with you.

Because so much has disappeared, I’m having to interpret “Willis’ Melbourne” very, very broadly and creatively.  Basically, if there is any connection with Willis and the years 1841-3 at all- an acquaintanceship in earlier years, an event in Willis’ time that occurred there, an earlier building that once stood there- then I’ll accept it as a glimpse of Willis.  It’s my own particular and rather idiosyncratic haunting.

Posted in Glimpses of Willis

‘Behind Closed Doors: At Home in Georgian England’ by Amanda Vickery 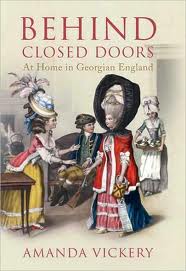 At a stretch I could say that this is ‘work’ reading, but the reality is that I just wanted to read it after reading The Gentleman’s Daughter last year.  I can, however, justify this little excursion.  As I  move away from researching my Judge Willis’ time in Port Phillip back into his earlier postings and life, I’m having to look at him in a domestic sense as well as father, brother and patriarch.  I’m aware that he is a Victorian man in that he died in the 1870s, but particularly in the 1820s and throughout breakup of his first marriage, he’s operating within the values of the ‘long 18th century’ which stretched up to Waterloo and even the Reform Bills of 1832.  But to be honest, I read this book just because I wanted to.

In her introduction, Vickery describes her intent:

This book takes the experience of interiors as its subject, staking claim to an uncharted space between architectural history, family and gender history and economic history.  It brings hazy background to the fore to examine the determining role of house and home in power and emotion, status and choices. (p.3)

In many ways this book is an extension of the arguments Vickery mounted in The Gentleman’s Daughter, grounded in domestic artefacts and consumer choices.  She reprises her arguments here: that the separation of domestic and public spheres for men and women is not as hard and fast as has been suggested; ideas tend not to emerge suddenly but instead evolve over time; that ‘turning points’ are often misleading and that

More helpful in my view is to disentangle the persistent and the newly emergent in the jurisdictions of both men and women. (p. 301)

This book explores the concept of ‘home’ in Georgian England- not necessarily the ‘house’ but ‘home’ in a psychological as well as physical sense. It  covers much the same chronological and social territory of her earlier book with a focus on the lesser gentry and the family members who slip between the more clearly defined roles: the widows, the unmarried daughters and sisters and the bachelors.  In a way, she is bringing the masculine back into the domestic.  She argues that although structurally and legally women were subject to their husband’s authority, within the home and domestic arrangements there was a more co-operative arrangement.

She uses a fascinating and exhaustive array of sources: the diaries and letters as you might expect, fiction (especially Austen and Gaskell) ,  but also court records, business letters and  account books.  These latter were an important find.   She could locate only three examples where she had the account books that documented the spending of both husband and wife, and although at first glance they appear to be just a list of outgoings, she draws so much more out of them.  It was the women (in this admittedly very small sample) who paid the servants’ wages, food, paid the children’s clothing and schooling expenses and especially paid for the linen, while the husbands paid rates, taxes and especially horse tackle- a huge expense which she likens more to the upkeep of a helicopter than a car today.  This differentiation in finance reflected a larger bifurcation in responsibilities and interests: masculinity was allied with formal grandeur, landscaping, silver and mahogany while femininity expressed itself through flower beds, ornamentation, textiles and ceramics.  Although women were often derided as spendthrifts, it was often men who indulged the big luxury purchases. But it was not a clearly defined ‘his’ and ‘hers’ at play: creating a home was often a shared endeavour and one that men, by themselves, felt quite at a loss to perform alone and they craved domesticity rather than feeling stifled by it.

She makes the interesting point that in a time of written orders, people had a vocabulary for describing exactly what they wanted.  (Ironically, with the rise of internet shopping we’ve returned to depersonalized shopping where we no longer finger and weigh the goods we buy but depend on image and words again.)  This was particularly well illustrated on her chapter on wallpaper, where again, she uses an unusual archive with flair and imagination- in this case, an otherwise rather boring archive of business correspondence to a wall-paper company in London.  She combs over these outwardly functional letters, noting language like ‘neat’ and ‘pretty’  and how it captured aesthetic judgments and charting, over time,  the way that wallpaper styles became more gendered.  But, she emphasizes, the decision making over purchases was shared- even where letters were written by men, their women’s input was clear.

She starts her book with the almost stifling claustrophobia of so many people living within the Georgian house- the maiden aunts, the boarders, the servants- and the practice of the householder in going round at night, locking people into their rooms as well as securing the front door and windows.  There is not much privacy here- physical or psychological.  Her chapter on bachelors acts almost as a counterpoint to her earlier work on the Gentleman’s Daughter.

This is a beautifully illustrated book, with very well chosen illustrations that are signalled well and clearly in the text, and which really add to the reading experience.  Vickery often starts the chapter with a little vignette that perks up the interest anew, and she has key characters that she returns to in different chapters.  I had felt in The Gentleman’s Daughter than I hadn’t been introduced well enough to her main informants: in this book, she draws on a wider cast but I felt more comfortable with them all, probably because she introduced the specific exemplars at the beginning of each chapter and didn’t relying on them so much to carry the argument of the book as a whole but just that chapter.  When you meet them again in a later chapter, it is an unexpected surprise.

There’s a podcast with Amanda Vickery here on the publisher’s site and a Guardian review of the book and one from the New York Times as well.  Reviews in History has a perceptive review, along with Vickery’s response. It would seem that I’m not alone in my admiration for the book.