‘Professors of the Law: Barristers and English Legal Culture in the Eighteenth Century 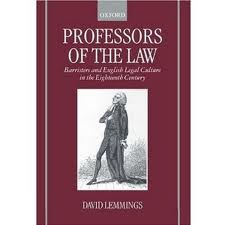 I’m not sure how my cogitations about Writing the Second Book First apply here.  This is a second book, and at first glance it seems to be very similar to the author’s first, Gentlemen and Barristers written ten years earlier.  But this is not a matter of writing the first book again. The earlier book focusses on a  50 year period between 1680 and 1730 while this book spans the eighteenth century and beyond.  Moreover this volume is much broader, and much more people-based than the first.

Both his first and second books have a strong empirical bent, with the main grunt-work in this book carried out through two fifty-name random samples selected from those barristers called to the bar in two triennia, 1719-21 and then again in 1769-71.  These fifty barristers were then investigated in detail,  drawing on biographical dictionaries, genealogies etc. to provide a potted trajectory of their careers over their lifespans.  Another appendix traces through the names of barristers who appeared in the records as Leading Counsel in the King’s Bench, Exchequer, Common Pleas and Chancery over four soundings in 1720, 1740, 1770 and 1790.  This has yielded a statistical analysis of the cohort, which is sprinkled throughout the text.

I’ve come across this prosopographical approach previously in Cell’s analysis of the Colonial Office in British Colonial Administration in the mid-Nineteenth Century: the Policy Making Process and again in Daniel Duman’s  The Judicial Bench in England 1727-1875. Given my own research topic, the prosopographical works that I’ve encountered have centred on the professional identities of groups within 19th century bureaucracies and legal systems, but when I look at Oxford University’s Prosography Portal, I see that it has been used for a range of studies- chess players up to 1914,  American prose fiction debut writers 1940-2000, Classical Roman martyrs and Worcester Cathedral Bedesmen. (What a strange site- there is a Prosopography for Beginners Tutorial if you’re so inclined…)

The final chapter differs from the other chapters in that it moves beyond the 18th century proper to explore the increasing bureaucratisation of the law and the ascendancy of Parliament.  It’s a strong, well-argued chapter.  The book  is generously illustrated with satirical cartoons and caricatures of the day that provide a witty, contemporary critique that often supports but sometimes challenges the text.

There is a huge amount of research in this book- not just combing through records to plotting characteristics and life-events of a group, but delving into the papers and correspondence of individual lives as well. While I find the statistics and data-sets useful for tracing the contours of a group- in Lemmings’ case of 18th Century barristers- what really brings it to life for me is when he focuses on particular individuals.   He did this in the 1990 book as well, but there seemed to be much more of it in this later book, and it is  richer for it.   The letters and vignettes in the book give a humanity to the barebones of a work-life, and allow him to build up a picture of a legal culture that men actually lived rather than just passed through.

2 responses to “‘Professors of the Law: Barristers and English Legal Culture in the Eighteenth Century”