My research has moved onto another stage: Judge Willis’ Adventures in Upper Canada.  My Australian readers will no doubt agree with me that Canadian history does not figure highly in the Australian history curriculum and that I probably shouldn’t feel as embarrassed as I do by my ignorance about all things Canadian.

This book was suggested to me on a Canadian history blog as a good, if somewhat dated, starting point in researching Upper Canada.  Where’s Upper Canada? you may ask.  (I certainly did).  As one of my first surprises, it’s not particularly “Upper” at all- it’s the area of Southern Ontario, north of Lake Erie and Lake Ontario. To my antipodean eye “Lower Canada” was actually closer to the north pole (and hence, upper)  than “Upper Canada” was.   It only officially existed until 1841, when Upper and Lower Canada were merged. 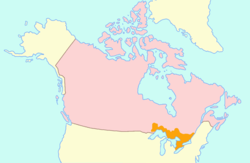 This, for me, was Revelation No 1- the river/lake eye view.  In his book, The Tyranny of Distance, Geoffrey Blainey emphasizes the importance of the lack of long inland waterways in Australia.  When you look at a map of Australia, there are none of those meandering rivers that weave , branching and converging across a continent.  Instead, apart from the Murray-Darling system,  there are stubby little twigs that start and break off, seemingly without reason.  No wonder explorers dragged their canoes with them into the Australian desert: their experience in other continents would have reassured them that there would be a river system somewhere, waiting to be discovered.  It also explains why early British settlement in Australia hugged the coast so tightly, and why they were keen to annex strategic harbours rather than the continent as a whole. (p. 122-3).  With a Canadian river-eye view, “Upper” refers to the reaches of the river, not the lines on a map, and “development” involves canals and river engineering works.

Revelation No 2 was the importance of borders, and here I remembered echoes of John Hirst’s first year Australian History subject where he emphasized the importance of Australia not having to share a border with any other colonial power.  I hadn’t considered before the significance in the time of the Napoleonic Wars of having French-Canadian neighbours, or the implications of “loyalists” coming across the border after the War of Independence, and the uneasiness that would evoke.  The book was a salutary reminder.

Revelation No 3 was the familiarity of policies across the empire. I was prepared for this, but it was still an “aha!” moment for me to see migration, land and church policies that I had thought of as “Australian” being applied in another context.  Our “national” history is not as unique as we might want to think it is- much of  it was part of what we would now deride as “one size fits all” empire-wide approach.  Policies that seem puzzling, like the insistence on restricting settlement around the Sydney area, make more sense in the face of Upper Canada’s experience when settlement was allowed to become too dispersed, a phenomenon exacerbated by the policy of reserving large tracts of land for clergy and Crown needs at a later date.  Of course “one size” didn’t fit all, and policies were subverted and ignored, but it’s interesting to observe the empire’s “corporate learning”, even if it only existed on paper.

Revelation No 4 was not strictly a revelation either: more a confirmation of the mobility of colonial careers.  For here we see George Arthur popping up as Lieutenant Governor of Upper Canada, having completed an earlier stint in Van Diemen’s Land- and there’s Charles Buller– I thought he was supposed to be “our” man in Whitehall!

The book was clearly written, with a strong chronological structure.  I found myself raising a sceptical eyebrow at the comment that unlike the United States, Upper Canada was never an “angry” Indian frontier- is that true?  The emphasis on the book was on politics and economics rather than social history, and I don’t think that there was a single woman in the whole book.  That’s fine: I’ve just started reading and plenty of time to rectify that.  There’s an almost laconic view of causality running through the narrative of this book: rebellions and ructions, when they occurred,  are portrayed as almost unnecessary, as structures would have collapsed under their own weight and events would have unspooled anyway.

The book, published in 1963,  was the first cab off the rank in the Canadian Centenary Series.  It concentrates on a defined geographical area within a clearly designated timespan.   The book ends optimistically, looking to the future and further progress.  The concept and premise of “Upper Canada” seems to be a phase in Canada’s history, and I sense that it has been left behind without regret or nostalgia in the march towards other things.

This entry was posted in Book reviews, Upper Canada. Bookmark the permalink.