An Invitation to the Ball

And now for a bit of shameless advertising. My local historical society has been hard at work recently putting together an exhibition called “An Invitation to the Ball”.  The inspiration for the exhibition arose when the curators were transferring our textiles collection into new textile archive boxes.  Many of the items had been donated forty years ago when the Society was in its infancy, and surveyed as a whole, we realized that we had a collection of beautiful objects. 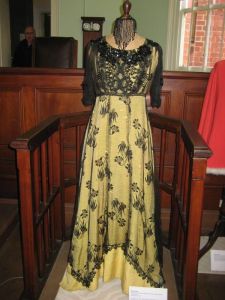 There is, of course, the much more extensive costume exhibition on at the NGV at the moment, but what I really love about this exhibition is that the displays are interwoven into a broader history of the Heidelberg/Ivanhoe area.  The focus is on women’s formal wear between 1850 and 1950, and there are many connections between formal occasions and the nearby Heidelberg Town Hall, the site of many mayoral occasions, debutante balls, concerts – to say nothing of regular Saturday night dances. 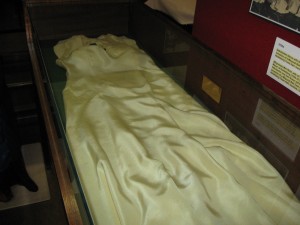 Because these are garments worn locally, we were able to trace through the original wearers and the occasions on which they were worn.  A search through our records and photographs found studio photographs and invitations for a debut ball held in the 1930s which, supplemented by an oral history memoir, are displayed beside the dress itself.  We were able to identify the lady mayoresses who wore particular gowns, and we found records of a number of formal occasions held in nearby facilities including “Sunday afternoons”, concerts and sporting festivals. 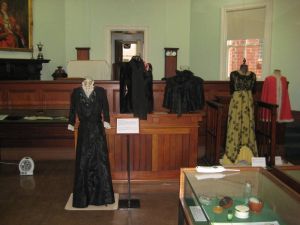 We were also able to locate, through our holdings of local newspapers,  advertisements for the web of haberdashers, drapers, outfitters and shoe shops in the local shopping centres- particularly the women dressmakers, all coyly named Miss or Mrs, and often formerly of Collins Street or other addresses.

The exhibition is open on Sundays 2-5 and will run until November 2010, so unlike most events that I write about here, it’s not closing soon!  Entry is $5.00 for adults, $2.00 for children under 16.  The Heidelberg Historical Society Museum is on the corner of Jika Street and Park Lane, Heidelberg. If you live in the northern suburbs you’ve probably driven past it dozens of times on the way to Burke Road. And who knows,  you may just even see me there!