The naming of names

If you watch almost any documentary on Aboriginal Australia, it is usually prefaced by a warning that the program will depict the names and images of people who have passed away.  The sensitivity about naming people who have died was also highlighted in Chloe Hooper’s book The Tall Man, which traces the events that followed the death of Cameron Doomadgee on Palm Island.  His name is no longer used in media and court reports: instead he is now referred to as Mulrunji, at his family’s request. This sensitivity is completely at odds with a Western view, where we yearn to have our name live on, even though we may have died.

I’ve been particularly aware of the naming of people while reading George Augustus Robinson‘s Journal as he travelled around the Western District of Victoria in the early 1840s.  The volume I am reading is part of a series edited by Ian D. Clark,  a true labour of love when you consider Robinson’s handwriting seen here.   I have commenced at Volume 2, as this covers the time that Judge Willis was in Victoria and so I have missed the specific details of  Robinson’s commission in the Port Phillip District but he, at least, interpreted it as among other things, a linguistic and ethnographic investigative task.  As he wrote on 10 May 1841:

My Aboriginal attendants, assured of my anxiety for information respecting themselves and the names of localities and animals, vegetables, insects, were at times extremely annoying in making this communication.

But he not only collects names of localities and animals, but also investigates and confers names on the natives he encounters as well.

It’s interesting to look at the names that he records.  On 11 October 1840 he records the original and conferred names of the Goulburn blacks under arrest at the time.

These were the names conferred by other settlers, prior to Robinson’s contact with the natives.  In April 1841 Robinson travelled down to Port Fairy where he came across

the wildest natives I have seen, that is, as their entire absence of all and everything connected with white people: they had not a word of English nor any of the manners or customs or the usual salutation of shaking hands.  …they had not any names from the English; all were pure, original  (28 April 1841)

He describes the process by which he gave them names:

I then took down their names &c. …I had some difficulty in inventing names for them.  They were not satisfied unless they had one; they wanted to be served all alike. (26 April 1841)

He then lists some of the names he bestowed:

In his book Aboriginal Victorians, Richard Broome discusses the significance of the name-giving ceremony.   Citing Jan Penney, he notes that “names possessed power and indicated relationships, which in turn carried obligatory rights and duties”.  He notes:

Before long new names were bestowed on the Aborigines.  This pleased Europeans, who were unable to master Aboriginal names and their tricky pronunciations, with soft ‘ng’ sounds and all syllables emphasized.  The bestowal of names also suited Aboriginal people for it established an attachment and avoided the use of traditional names that were hedged with protocols and strictures. (Broome, Aboriginal Victorians p. 57)

It’s interesting to note the names that were conferred by white settlers.  One of the most striking, and disturbing things about the list of names bestowed on the Goulburn River Blacks- widely feared for their ferocity- was the prevalence of the name “Fuckemall”.  Robinson decried it:

The names given to the natives by the stockeeepers [sic] and others is a proof of the depraved state of the community of those parts.  This boy mentioned a woman named ‘cunt’ and ‘arsehole”, and another ‘white cunt’.  Faithful [a settler]  said Mr Docker asked a black woman her name before him and she replied ‘white cunt’. I asked same woman and she gave me same answer. Her husband told me the same.  I gave her a fresh name.  (15 Feb 1841)

The names that Robinson himself conferred are interesting.  Perhaps as a response to young, well formed men, he seems to have often named a young man “Mr Robinson”, and on several occasions he named ‘Mungo Park‘ (the explorer of the African continent) and Napoleon.  Here we have Franklin (Benjamin? Sir John?), Jupiter and Neptune.  He also confers aboriginal names himself, even though they already have aboriginal names.  The aboriginal names are those of Van Diemens Land aborigines he knew- or is he just lacking imagination?-  Wooreddy (as in the fascinating fictional account of early VDL clashes Doctor Wooreddy’s Prescription for Enduring the Ending of the World) and Truggernonner, (Truganini) considered to be the last Aboriginal “full-blood” and who was brought over by Robinson himself from Flinders Island.

It’s interesting to note that several are given the names of white settlers, but in Robinson’s notation are given the designation “Mr”.  This does not always seem to be the case.  Broome tells the story of Charley, the aboriginal boy who wanted to become a gentleman, and managed to equip himself with all the accessories, including top hat and cane :

Charley realized that Europeans had two names and that gentlemen had formal ones, so he renamed himself Charles Never. (The other youths wanted two names as well, and with the help of the Edgars, became James White, Jacky Warren, Thomas Gurrenbook, and Kitty, Harry and Tommy Bungaleenee.) (Broome, p. 51) 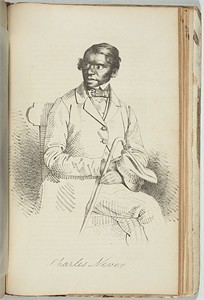 As Broome points out, the conferring of a name did not necessarily have to denote ownership, but could be an act of affiliation that worked to Aboriginal advantage as well, either by a claim on the settler or as a way of deflecting white intrusion into private beliefs. It’s striking that prominent people in the Koorie community today often share surnames with 1840s settlers as well-  there are several prominent Koorie ‘Firebrace’ s for example,  probably named by Major William Firebrace, a prominent Port Phillip personality.  Likewise Pettits and Atkinsons – common Koorie surnames.  I had always assumed that this suggested that white men had consorted with Aboriginal women: it had not occurred to me that perhaps there was Aboriginal agency in adopting these names.

They conferred on me a new name namely Ar.rum.ar.rum.nare.nit, which in their language is great or big chief  (12 August 1841)

Robinson also reports on Glendinnon, a white man much respected by the natives he deals with.   Robinson arrived at Mt Emu

where the far famed among the Aborigines, Jaggy Jaggy, resides.  He is a white man and a lowland Scotchman named Glendinnon and whom the Aborigines have designated as Jaggy jaggy min min. (5 August 1841)

After Robinson’s description of many callous, brutal white settlers, Glendinnon stands out for his calm demeanour and humanity.  I don’t know what Jaggy jaggy min min meant, but I’m sure that it denoted more dignity, for both the namer and the named,  than ‘Fuckemall’.

6 responses to “The naming of names”