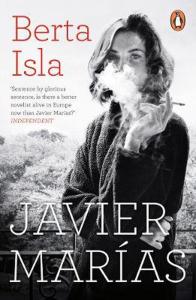 I’m not really into spy novels, but Berta Isla turns the spy novel on its head, because it’s not really about the spy at all. Instead, it’s about the people he (or she) leaves behind as another operation begins, another identity is adopted  and other deceptions are woven.

Tomás Nevison is Anglo-Spanish, and has a very good ear for languages and mimicry. While over in Oxford, he is ‘approached’ by a tutor who sounds him out about working ‘for the good of the Realm’. He shows little interest. He has his long-term girlfriend, and later wife, Berta Isla waiting for him in Madrid, and it has been just assumed that they will end up together, even though they both lose their virginity to someone else. But when Tomás finds himself accused of a crime he says he did not commit- charged by none other than Inspector Morse, no less!- he finds himself entrapped into working with MI6 after all.

And thus Tomás is launched into a strange half-world where he leaves his wife, Berta, and their children for years at a time. At first believing that he is away on business, Berta soon starts to suspect that Tomás’ other life is more shadowy than she could have imagined, especially when she comes into contact with other equally mysterious characters. She is unable to reach him: he reappears without warning, and leaves just as abruptly. Meanwhile, time goes on. Franco dies, the Northern Ireland Troubles rage, the Iron Lady has her Falklands Island victory, the Berlin Wall falls – and Berta waits.

And waits. And waits.  This is a long book – 532 pages- and I would estimate that half of it is just waiting. It’s a self-consciously literary work, with many references to T. S. Eliot’s Four Quartets. It is told sometimes in the third person, and sometimes from Berta’s first person perspective. Yet, the narrative voice is very much the same – a  prolix, long-winded, introspective voice, where the self is constantly watching and monitoring, and where thought is much the same as the spoken word.

Its wordiness is not just in the content. The sentences are lengthy and labyrinthine, and strangely flat. By the end of the book, you are almost inured to the wordiness, which seems to just clang now, without meaning, not unlike Tomás and Berta’s lives.

I did find myself wondering half way through this book when and whether anything was going to happen. It probably could have been cut by half, without any loss of effect.  I saw the ending ahead of time, although I was unprepared for the hollowness that I felt – and that no doubt Marías intended  – when I finally got there.