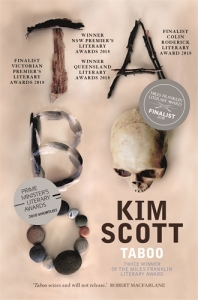 Some writers are noted for the diversity of themes and genres they explore. I’m thinking, for example, of Joyce Carol Oates, where each book seems to be completely unconnected to the one that came before or after it. Other writers, in contrast, have themes that they return to again and again, approaching them from different angles, probing them, teasing them out.

Kim Scott is one of the latter. I haven’t read his first Miles Franklin Award winning book Benang (although I can see it winking at me from my bookshelf), but I gather from reviews that he returns to events and places from that earlier book in this, most recent, one. His second Miles Franklin Award winning book That Deadman Dance (my review here) took us back to the earliest days of white settlement, with a wistful ‘if only’ and regret for lost opportunities. In Taboo those ‘if only’s’ are long past, but like That Deadman Dance, the book does hold out possibilities for reconciliation, albeit with a more jaundiced eye. I think of the two books as bookends of a long history of dispossession, neglect and treachery between the 1830s and 2020.

In Taboo, Tilly has only just recently become aware of her indigenous heritage when her dying father asks to make contact with her from jail. She finds that she has half-siblings, aunts and uncles that she not known about, but she is wary in approaching this community which reaches out to embrace her as ‘Jim Coolman’s girl’. She is a damaged young woman, who has only recently escaped from an abusive relationship, described at first just in fragments, adding to your sense of a dread as a reader. The Wirlomin community invites her to return to country for the opening of a Peace Park, sponsored by the Kepalup Local Historical Society, who hope that the ‘traditional owners’ will add some authentic indigenous flavour to the proceedings.

Tilly has her own unfinished business during this visit too. As a baby, she was fostered by a white couple, Dan and Janet Horton, who live on Kokanarup, a station that was the site of a massacre and thus taboo to the indigenous community. She remembers little of the fostering, but Dan remembers her and wishes that his late wife, who had died only months previously, had been there to see her again. Janet Horton had been one of the instigators of the Peace Park project, aware of the history of Kokanarup, but the Horton family and the white community generally have firm boundaries to the ‘reconciliation’ on offer. For white Australia, actually giving the land back is the ultimate taboo.

Nearly two hundred years of colonization have taken their toll on this community. There are the old stories, handed on from generation to generation, but much of the Noongar language has been lost and now culture has to be consciously taught in programs or, as in this 6 day trip, through camps and activities.  Tilly’s own father, Jim Coolman, had started such programs in jail, and he turns to one of his students, Gerry, to make contact with Tilly once her gets out of jail. It is a community finding itself again, holding tight to the things that have remained, and with a determination to rebuild and hand on to the next generation. There is drug and alcohol abuse and crime, but there is also generosity, humour and laughter. The return to Kokanarup is part of this healing. Language is at the heart of it: learning the old  world, binding together through shared language.

The abuse that Tilly has escaped- and is still escaping- is uncovered in the second half of the book, and it has not finished yet. There are bad people drifting around the community – Gerrard, Gerald’s identical twin, is stoned or violent (and sometimes both at once) and a white prisoner officer and drug pusher, Doug, abuses his power at both a community and personal level. There is also the condescension of the college Aboriginal Support Officer, Maureen McGill, who blithely tells the Noongah kids that she has worked with lots of Aboriginal people, “cultural people, still on their country” (i.e. ‘real’ Aboriginals), and is just as keen for the trappings of Aboriginality – the didgeridoos, the dancing- as the Kepalup Local Historical Society.

The book is beautifully constructed, with a circularity that always appeals to me as a reader. Scott has such a good ear for dialogue, and he writes about the land with love and perception. I think that I probably preferred That Deadman Dance, but that was probably a ‘safer’ book, where  the ‘historical fiction’ genre avoids the question of current-day intransigence and inaction on the part of white Australia. Taboo is quietly insistent that there are questions that need to be answered, and relationships that need to be repaired.

4 responses to “‘Taboo’ by Kim Scott”