‘Madeleine: A Life of Madeleine St John’ by Helen Trinca 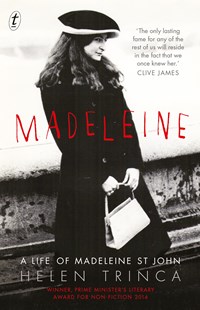 The author of this biography, Helen Trinca, came to know of Madeleine St John through one of her books. So did I.  For me it was The Women in Black, which I read back in 2011 as part of an online Australian Literature bookgroup and reviewed here. Erroneously suspecting that it was autobiographical, it seemed to me at the time to be a “happy, satisfying read” and “a small nugget of a book, affectionate, nostalgic and optimistic.” The film, The Ladies in Black (I hadn’t noticed the change in title before) was released in 2018, and it also struck me as a “feel-good, look-good” movie.

Having now read Trinca’s biography of St John, I couldn’t have been more wrong about The Women in Black being autobiographical.  And if I found the book “affectionate, nostalgic and optimistic”, perhaps that says more about St John’s skill as a writer than anything else, because the author was certainly none of those things.  Instead, she was prickly, bitter and more likely to hold a grudge than indulge in nostalgia.

Born in 1941 while her father was with the A.I.F. in Palestine, Madeleine St John’s mother Sylvette was Romanian, but styled herself as French after arriving in Sydney in 1934. Her father was the barrister and later M.P. Edward (Ted) St John, from a blue-blood conservative family.  The surname, pronounced ‘Sinjin’ niggled at me – something about the Voyager maritime disaster– and Trinca’s book reminds us that it was during his maiden speech as a Parliamentarian that St John attacked his own party and called for  second Royal Commission into the accident (which, when it finally occurred, completely overturned the findings of the first, flawed Royal Commission). But the Ted St John who appears in this biography is not so much the politician, as a father – and in Madeleine St John’s eyes, a very poor one.  Her parent’s marriage was an unhappy one. Her mother was an alcoholic, and Madeleine and her sister Colette were packed off to boarding school. When Madeleine was twelve, her parents divorced and soon afterwards her mother Sylvette committed suicide. Her father badly bungled telling his daughters, and remarried too quickly, to Val.

As Madeleine St John was too ready to tell everyone, her father’s perfidy and betrayal lay at the heart of her own world-view. Her anger and bitterness about it warped nearly every aspect of her life right up to her death. She was mercurial, cruel and self-centred, allowing people to come close and then spurning them when they became too close. The irony is that even though she despised her father and idolized her mother, she combined traits from both of them.  While denying all her life that her mother had committed suicide, she shared Sylvette’s fragile mental health, and suffered depression and breakdowns. She certainly shared her father’s black-and-white views about what was right, and refused to compromise them for anyone. For the sake of her own principles, however she defined them, she often acted against her own interests and burnt many people. She was more like her father than she would ever have admitted.

Madeleine enrolled at the University of Sydney in 1959 and circulated amongst that golden generation who were to head off to England: Clive James, Barry Humphries, Bruce Beresford, Les Murray, Robert Hughes, Mungo MacCallum. In this testosterone-heavy atmosphere, she became one of the sub-editors of Honi Soit (the university newspaper) but was never published in it. She was part of a group of eight girls, dubbed ‘The Octopus’ who joined up with the Sydney University Dramatic Society and regularly met at a cafe in Manning House.  She married and moved with her husband, Christopher Tillam, to America where he embarked on a film-making career. As emotionally brittle as she was, it was no surprise that the marriage faltered. Madeleine moved to England where she worked in a succession of bookshops and antique shops, managed to get council housing and developed an image that combined a  stylishness and snobbery that belied her meagre income. She became rigidly religious, and spent years – even decades- writing a biography of Mme Blavatsky, the Theosophist, which she ended up burning (and which I would have been quite interested to read, really.) She was not published until 1993, at the age of 52, when she released The Women in Black, set in the sun-drenched Sydney of her own adolescence. Her three other works were set in her own London-based suburb Notting Hill, one of which (The Essence of the Thing)  was shortlisted for the Booker Prize, thus bringing her to the attention of the Australian literary scene.

She did not particularly welcome the acclaim that publication brought her, and although it gave her the financial means to travel, she was no happier than she had been previously.  She abhorred the thought that she would be embraced as an Australian by the Australian literary scene, when she had spent all her adult life putting her Australian nationality behind her. In poor health, she eschewed the attempts at reconciliation by her step-mother Val, and continued to draw in and then reject her friends, who would be bewildered by her change towards them.  In poor health from emphysema, she became increasingly concerned to shape her image after her rapidly-approaching death, rejecting one literary executor for another, and demanding the return of letters.

I think that Madeleine St John would have been infuriated by this biography, where the author treats her with a cool impassiveness. She does not buy into St John’s histrionics and manipulations, but recognizes patterns in her behaviour and makes some sense of it, without condoning it. The book lightens, as did St John’s own life, once she achieved her break-through publications, but for Trinca (and me, for that matter), her writing only highlighted the paradox between the writer and her work. Trinca keeps her eyes steadily on Madeleine the character, and there is no in-depth analysis of the books as such. Her footnotes pay testament to the author’s diligence in tracking down friends and acquaintances – none of whom could give unalloyed praise for St John. She was fortunate to be given access to a collection of audiotapes recorded by St John that were left in the keeping of a friend.  She read St John’s own statements about her life with a judicious eye, and combed through the lively but self-serving correspondence that other people had kept, much against St. John’s wishes. Using this network of friends and acquaintances, Trinca manages to weave a background against which St John’s life can be placed; a background that captures the heady optimism of university life in the early 1960s, the tangled connections amongst an intellectual and creative largely expatriate milieu, and the continued warp and weft of family background, no matter how much someone might want to distance themselves from it.

There are a lot of people in this book, and I was often glad of the index to remind myself who was who. It was a little frustrating that the index was organized by surname, whereas the text referred to people, in a familiar tone, by first name. More than once I found myself having to scan the whole index, until I found the first name mentioned in the text.

This is an excellent biography, that captures well the ambivalence of the biographer towards her subject.  It won the Prime Ministers Literary Award for Non-Fiction in 2014, and was short-listed for several other awards. The summary on the back cover of the book mentions sadness, tragedy, love and perseverence.  I don’t know if I could be so charitable. Self-centredness, control and vindictiveness spring more to mind for me. And the mismatch between St John’s writing and her own life? I remain mystified, and I suspect that even after all this exhaustive research, I think Trinca might be too.

Sourced from:  CAE bookgroup and read for The Ladies Who Say Oooh.

I have added this to the Australian Women Writers Challenge.

This entry was posted in Australian Women Writers Challenge 2020, Book reviews, The ladies who say ooooh. Bookmark the permalink.

2 responses to “‘Madeleine: A Life of Madeleine St John’ by Helen Trinca”