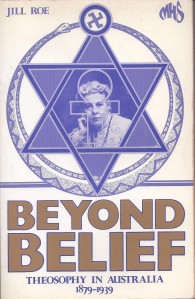 A couple of months back, I went with my Unitarian fellowship to a retreat near Springbrook in south-east Queensland, owned by the Queensland Theosophical Society. Curious about theosophy and wondering if it has any parallels with Unitarianism, I decided to read Jill Roe’s book Beyond Belief. (Thank you for asking: no, Unitarianism  is completely different in terms of philosophy although maybe it does have similarities in terms of public profile). Roe herself was not a Theosophist, so this book is no ‘insider story’ – in fact, it is written with a dry, dispassionate but not hostile air of curiosity. And curious the history of Theosophy in Australia certainly is, but given its attraction to politicians, judges and some academics in the first decades of the 20th century, it can’t be discounted either. 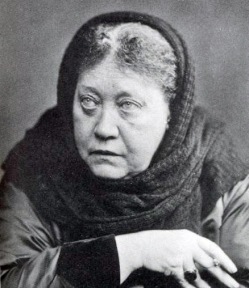 Roe’s book covers the years 1879-1939. Its starting point is 1879 when the Theosophical Society, an international organization, enrolled its first Australian member.

Established in  America in 1875 and eventually based in India, with the so-called psychic Mme Helena Blavatsky as its founder, people joined the central Society as individuals rather than joining a local satellite.  When Mme. Blavatsky was pronounced a fraud for manipulating her seances, she fled to Europe and never returned to India,  and the Theosophical Society continued on without her.

Between 1891-1894 Theosophy gained an effective foothold in Australia with small groups established in various states. Success was mixed. Melbourne, with its solid network of liberals and secularists might have seemed a fertile ground for Theosophy: think Alfred Deakin, Henry Bourne Higgins, Vida Goldstein etc. However, in Melbourne the experimental spiritual space was already occupied by Charles Strong’s Australian Church, the Melbourne Unitarian Church and the Victorian Association of Progressive Spiritualists.  Sydney was a more fractious place, with either hardline churches or frankly ‘nutters’ (have things changed?) and a “freer market for heterodoxy”. The surprising thing to me was that Brisbane became a stronghold for Theosophy (evidenced perhaps by the continuing presence of the retreat I visited in Springbrook?), and it attracted professional and commercial people like judges, doctors, lawyers etc.

The real international “catch” for Theosophy world-wide was the recruitment of Annie Besant (did you know that it should be pronounced to rhyme with ‘pleasant’?), already well-known for her activism on contraception and championing the cause of the British Match-Girls. (I’m still haunted by a picture I saw in primary school fifty years ago of a girl my then-age, suffering phossy jaw).  She visited Australia quite often in her role as President of the Theosophical Society and was well received as an excellent public speaker. There was a personal connection too: her daughter had married English journalist Ernest Scott, who ended up the first Professor of History at Melbourne University. He had eschewed both Theosophy and his double-barrelled surname Besant-Scott by the time he received his university appointment , and the marriage had broken up.

Now, for me as a non-Theosophist, this all gets pretty weird. Not only the clairvoyance, but also a belief in Lemuria- an Atlantis-like mega-continent encompassing the Himalayas, Madagascar, Tasmania, Greenland and Siberia before sinking into the sea because of volcanic activity. Then there’s the onward evolutionary cycle of rise and fall of dominant civilizations, with the Aryan world in decay, waiting for the sixth cycle which would be presaged by the arrival of the Coming Christ, the World Teacher. There was the connection with Co-Masonry;  the esoteric offshoot ‘The Order of the Star in the East’; and the takeover of the Old Catholic Church, renamed the Liberal Catholic Church complete with Bishops, mitres and ‘mysteries’.

Then there was the World Teacher himself, whom the Theosophical Society identified as Jiddu Krishnamurti born around 1895 in India and adopted by Annie Besant and fellow Theosophist Charles Leadbeater (no relation to the possum). Expectations of the arrival of the messiah reached their zenith in the 1920s, which was also the high point of Theosophy in Australia. The Star Ampitheatre was built on prime harbourside Balmoral Beach in Sydney for the World Teacher “when he comes” (see image here), but not for Jesus walking through Sydney Heads as the legend goes.  The land cost £7000 and the ampitheatre building itself cost £20,000.  It was demolished in 1951.

During the heady 1920s Theosophy was strongest in Sydney (despite schism) and prominent real estate was purchased in all the capital cities.  It owned and controlled 2GB (home of Alan Jones -HUH!). It moved into education, particularly kindergarten education, with a later offshoot into Anthroposophy and Rudolf Steiner education. It encouraged art (particularly the Arts and Crafts movement) and dance (especially eurhythmics). Despite claims to being ‘progressive’, it was a rather straitened progressivism by today’s standards: vegetarian, teetotal, dislike of ‘luxury’, anti-vaccination, proponents of ‘racial hygiene’ and attracted to some of  Mussolini’s ideas.

By the 1930s Theosophy was in decline, and has remained that way. Anthroposophy attracted many of its leading lights; the World Teacher Krishnamurti rejected Theosophy himself and went off in a different spiritual direction; the Society lost 2GB and people drifted into other religions or apathy. It had become an anachronism. Theosophy is, as Roe says “best understood as an alternative religious position dating from the age of imperialism. The ground it stood was undermined by the crises of the early twentieth century” (p. 378)

Quite apart from my curiosity about this esoteric (and in my opinion eccentric) philosophy, the book highlights three interesting themes.  First- here is a church where the major figures are women (Mme Blavatsky and Annie Besant) although, as Roe points out, women only held 1/3 of the officebearing positions in the organization.  Second, this is an imperial endeavour, with India at its heart. The frequent communications and visits between Australia (particularly Brisbane) and India are a different way of looking at empire, largely ignoring the metropole. Finally, there are those rich intersections between Australian intellectual life in the early 20th century and Theosophy- a veritable Who’s Who of connections.

This book was published in 1986 as part of the NSW University Press ‘Modern History Series’. It has the look and feel of a typed manuscript or thesis, with very dense text and footnotes at the end of each chapter (as used to always be the case). Apparently Wakefield Press are crowd-sourcing for a revised edition edited by Marion Quartly  (I wonder how they’ll get around the problem that Wakefield already have another book under their imprint called ‘Beyond Belief’?)

This is an academic text, and it is more an institutional history than a bottom-up, personalized history.  However, in our increasingly rabid religious world, perhaps there will be a readership for this strange history which has so many intersections with early 20th century intellectual history. After all, in an interview with the Australian Humanities Review in 2004, Roe said

if you want to understand the norm, you should look at what isn’t the standard. It’s very illuminating to look at those who have taken a position to the edge, it casts a different light on what really is in general.

I have read this book as part of the 2019 Australian Women Writers Challenge.