‘The Man in the Red Coat’ by Julian Barnes 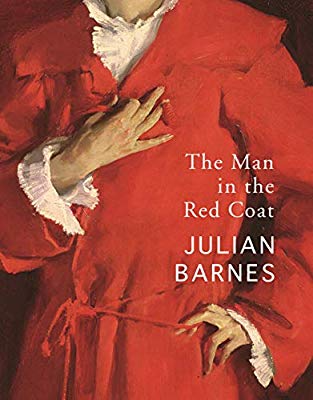 Within one page of opening this book, I relaxed into the arms of a master story-teller. There’s that distinctive Julian Barnes voice – intelligent, urbane, confident – and he sustains it the whole way through this rather strange book.

What is it? The publisher’s designation on the back of the book is ‘Biography’, but it’s certainly not a cradle-to-grave biography. It starts with three men travelling to London for some ‘intellectual and decorative shopping’. One was Dr Pozzi, surgeon and gynaecologist, who was the eponymous ‘man in the red coat’ depicted gloriously and yet headless on the beautiful front cover.  The other two men were both homosexual: aesthete Count Robert de Montesquiou who was fictionalized in Huysman’s A Rebours, (Against Nature) and as Baron de Charlus by Marcel Proust; the other Prince Polignac who thinly disguised his homosexuality with a convenient marriage to an American lesbian. From these three men, Barnes spins off into a network of observations and anecdotes about the men and women of the Belle Epoque- that decadent, glorious, gilded period from the end of the Franco-Prussian War in 1871 to the outbreak of World War I. It is not just a French story: instead there are connections with Oscar Wilde, the American painter John Singer Sargant, the pre-Raphaelites, and that divisive event the Dreyfus Affair.  It is a time of travel, duelling, art and gossip, and Barnes skips from one to the other lightly, gathering up the threads of connection and coincidence with an omniscient chuckle.

At the same time, he speaks to us as a biographer and writer.  Montesquiou’s nemesis Jean Lorrain, for example, is “someone you half want to keep out of your book, for fear he might take over too much of it” (p.71). Huysman’s A Rebours, which featured in Oscar Wilde’s trial as a ‘somdomite’ [sic] is an “exotic and wandering text” (p. 96), a description which equally applies to Barnes’ own book.

He writes about the biographer’s craft. He tells us how he came across the Sargent portrait of Pozzi (p. 166); he observes that novelists never ‘study’ a real-life person “with any deliberate attempt to copy and paste them into a novel. The whole process is usually much more passive, sponge-like and haphazard than that” (p. 229).  Sexual gossip is the ultimate unknowable. Why does it fascinate us so much?

What is it about the present that makes it so eager to judge the past? There is always a neuroticism to the present, which believes itself superior to the past but can’t quite get over a nagging anxiety that it might be. And behind this is a further question: what is our authority for judging? We are the present, it is the past: that is usually enough for most of us. And the further the past recedes, the more attractive it becomes to simplify it. However gross our accusation, it never replies, it stays silent. (p. 168)

This might make the book sound very theoretical, but it’s not.  These are just digressions, where Julian Barnes comes on stage. There is a narrative arc to the book, introduced in the opening paragraphs and fulfilled in the closing pages, like the final resolution of a piece of music where the penultimate note has been left hanging.

It is a thing of narrative beauty, and the book itself is of beauty itself too. Its cover is striking, and throughout the text are black and white cards, which were issued as an advertising gimmick and given away with chocolate bars, like cigarette cards or chewing-gum cards. There are full colour plates throughout the text, located right where they belong.  The paper is thick; there is a bookmark sewn in.  It feels like a luxurious coffee-table book, but of course it is far more than that. (It is, however, quite a bargain at less than $40.00 Australian for a hardcover). But -oh- I yearned for an index. I wonder why it doesn’t have one.

In the author’s note at the back, Julian Barnes comes before the curtain, so to speak, to make a political speech about Brexit. That might seem jarring, but it is not.  We have spent over 250 pages reading about a rich culture, where England and France are interwoven, with people shifting effortlessly across the Channel and back again. ‘Chauvinism is one of the forms of ignorance’ went Dr Pozzi’s maxim, and this whole book is a full-throated rejection of the ignorance that impelled the Leave campaign.  As it happened, I read it in the wake of the eulogies and TV specials on Clive James. I’m reading his Cultural Amnesia, one chapter at a time, as an act of posthumous homage, I suppose.  The two books are very similar: intelligent, irreverent, show-offy and a defence of reading, thinking and talking across cultures.