‘Christmas: A Biography’ by Judith Flanders 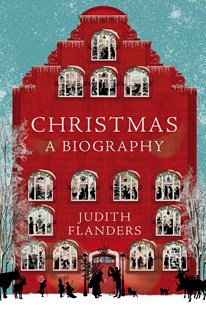 The gospels themselves don’t really give specifics, and the few specifics they do give are problematic. There was a census in 6CE, but Herod had died ten years earlier, and there is no record of a census that required men and women to return to their place of ancestral origin. There is no mention of a date, but it would have been too cold for sheep in December, so it certainly wasn’t in December.  From the second century, the Eastern church celebrated Epiphany on 6 January (and indeed, it still remains an important date in many Christianized cultures)  and it was Julius I, Bishop of Rome (337-352) who decreed that Christmas should be observed on 25 December. A whole clump of Saints Days occurred in December and January, as well as the Roman Saturnalia festival in the first half of December, Kalends to bring in the New Year and the celebration of the solstice on December 25. There was a rich brew of traditions which could be incorporated into what we know as ‘Christmas’.

From the start, food and drink was important. By 389 the Archbishop of Constantinople warned against the dancing and feasting to excess that were occurring on the day, and by the mid 7th century Theodore of Tarsus, Archbishop of Canterbury was reminding his congregation that the church frowned on gluttony. Certainly the few remaining menus from medieval feasts are stomach-churning. All the food, both savoury and sweet, was laid out at once, and often cleared away for a second ‘mess’ where a whole new table of food would be laid out just in case you hadn’t gorged yourself witless with the first ‘mess’.  It was very meat-oriented. Mince, or ‘shred’ pies really did have meat in them, Christmas pudding was thick beef stock with dried fruit. (I wonder if that explains the persistence of suet in pudding recipes, although I always used butter).

Processions, fairs and plays all  provided entertainment. There was an element of ‘misrule’ in many of these entertainments, with servant-as-master inversion and Twelfth Night japes.  But the rosy myth of all the villagers being invited into the ‘big house’ was just that – a myth.  If anything, the gift-giving went the other way with people giving presents upwards to their patrons, and any charity flowing back down again was given rather grudgingly.

The Puritans did outlaw Christmas, forcing the shops to stay open, but as Flanders points out, what the law says and what people do in the privacy of their homes are two different matters. When the prohibition on Christmas was lifted – amazingly, not until the 1950s in Scotland! – the shops still had to stay open because now everyone was feasting and drinking openly again.

A friend of mine mentioned how she invited friends around two years in a row to help decorate the tree, and on the third year she was expected to do it again “because it’s a tradition!” Traditions don’t take long to embed themselves, as the later chapters dealing with the 20th century manifestations of Christmas show. Flanders goes from one invented tradition to the next, popping them like balloons.  Carols were just secular songs (pop!); Santa was originally a little elf, as in The Night Before Christmas (pop!); then he was a tall skinny man (pop!); it wasn’t Price Albert who introduced the Christmas tree to England, but rather the Princess Lieven or Queen Adelaide wife of William IV (pop!) The ‘ancient’ tradition of carol services was invented in 1880 and held at Kings Cathedral only since 1918 (pop!) More recently,  Chanukah (Hanukah) and the Afro-American invented ‘tradition’ of Kwanzaa have been rolled into the ‘festive’ season.  First books, (e.g. Washington Irving’s History of New York and Charles’ Dickens A Christmas Carol)  and now films shape our visual impression of a “traditional” Christmas.

The book moves chronologically, but I confess to finding that it skipped around quite a bit, with similar information appearing in different chapters. The chapters don’t actually have titles, and so it’s not clear quite what the organizing principle is. The lack of an index exacerbated this problem. In fact, it’s only now in writing this review that I realize that there is a ‘legend’ of icons that appear in the margins of each page  (e.g. carnival and riot; drinking and drunkenness;  greenery; religion ritual and rite).  However, the icons are so liberally sprinkled that they don’t make locating specific information any easier. The chapter-notes and primary/secondary references are only available through her website. The footnotes at the bottom of the page (yes!) are digressive and quirky. The whole book has the feeling of being a light read.

The book is also rather Protestant-focussed if  it is about religion at all, which is of course Flanders’ main point: that Christmas is at heart a polyglot secular festival, rather than a religious one.  The book deals with England, America and German and Scandinavian Europe but there is no mention at all of the ‘New World’ except a fleeting mention that improved transportation could bring Australian or Argentian meat to British Christmas tables.  In keeping with the research interests of her other books (e.g. The Victorian House: Domestic Life from Childbirth to Deathbed and The Victorian City: Everyday Life in Dicken’s London) her focus is on the domestic and everyday, the emotional and the experiential.

She starts her book with a quote from the poet C. Day Lewis:

there are not Christmases – there is only Christmas – a composite day made up from the haunting impression of many Christmas Days, a work of art painted by memory. (cited p. 2)

She finishes her book by pointing out:

By repeating the rituals, we can go back there every year. Christmas nostalgia is not only for the Christmases of our childhoods, or those we have read about, or seen in films and television. It is a conflation of all those Christmases, a pick-and-mix collection of traditions, emotions and rituals. Some are ours, some our parents’, or what we think we remember of what our parents have recalled of their own childhood. Others come from books, from magazines, from how Martha Stewart or Nigella Lawson or the Food Network or Oprah tells us things have ‘always’ been done, validating our own, or brand-new, customs by claiming that they are long-standing rituals based in historical reality. (p.244)

With just one more sleep until Christmas, I enjoyed this book even if it brings out the ‘bah-humbugs’ in me. It provides plenty of ammunition against the conservative ‘keep Christ in Christmas’ and ‘Ban Happy Holidays’ culture warriors.  And if you want a visual, cut-down version of the book, here’s the video that alerted me to Judith Flanders’ book and prompted me to read it: