‘An Australian Son’ by Gordon Matthews 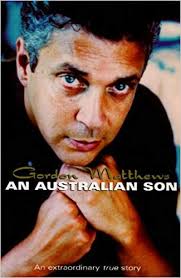 There are spoilers in this review

In his short disclaimer about” changed names to protect identity etc.” at the start of this book, Gordon Matthews writes:

This book was an act of catharsis. I wrote it to make peace with myself.

The motivations for writing a memoir are many and varied, and I suspect that ‘catharsis’ is quite a common one. However, I’m not sure that all catharsis needs to be put into print. I closed this book feeling complicit and somewhat sullied, and I wondered why Gordon Matthews published this book.

At one level, I can understand it. Identity, or the search for it, is one of the touchstones of modern life. In Australia,  there is heightened awareness of the Stolen Generations of indigenous children after years of Royal Commissions. In this book, with the small black and white photograph on the back cover of a cheeky, curly-haired boy who certainly looks aboriginal, we think that we are reading the story of an adopted child who learns later in life that he is part of the Stolen Generation. But that’s not what happens (and here’s the spoiler, so look away now!). Adopted by a middle-class white family; teased by his private school ‘friends’ who call him ‘Abo’; conscious always of his difference, he is encouraged by an Aboriginal Liaison Officer to apply for a university scholarship and eventually gains a designated position as Australia’s first indigenous diplomat. Then he finds out the truth: that his father is Sri Lankan, not Aboriginal, and his whole identity falls apart. Although his Aboriginality was not a deliberate hoax, he knows that he cannot continue to claim an indigenous identity that he does not hold.

I was slightly surprised by his telling of how he came to embrace  and be embraced in what he thought was his own Aboriginality.  It seems at one remove from the broader Aboriginal community, seeming to be based mainly within the university and bureaucracy. Is this because he is in Canberra, perhaps? I’m not sure quite when the actions in this book took place, and maybe things have changed. As I understand it, indigenous identity involves both family connections and genetics (rather ironic given how ‘blood’ ratios have historically been used as such a weapon) and acceptance by the community. It is only near the end of the book, when he has admitted that he is not indigenous, that his relationships with the community come into sharper focus.

Secure and happy enough with his adopted parents, it is his search for racial identity in particular that impels his search to find his birth parents. He is curious about them, but not as individuals in their own right, but as the key to his racial understanding of himself. He eventually finds them in America. After giving him up for adoption, they married and went on to have other children. Gordon finds  not only both parents grieving their relinquished first child, but also blood siblings who have been completely unaware of his existence.

The relationship with his birth mother was tense, despite his parents’ joy at finding him and embracing him as part of their family. Contact between him and his family cooled. His birth parents did not want him to publish this book, and it was at this point that I felt I wanted to drop the book from my hands. This was such a fragile relationship, and he was asserting his right over his own story at the risk, I suspect, of alienating and losing this new family that he had found on the way to discovering his racial identity. Pigheaded? Self-sabotaging? Selfish?

The book raises complex questions about identity, race and family. There is a distance in the telling, both at an emotional level and in the slightly stilted language. Whatever he might have been as a diplomat, Matthews is not a ‘natural’ writer.

I can find nothing on the internet about what happened next to Gordon Matthews, or his family.  The silence is a little unnerving. I have no idea how the publication of this book was received by his family at the time, and I wonder if, more than 20 years later, he would say that it was worth it. I guess I will never know.

Sourced from: Council of Adult Education. It was the June book for my bookgroup.

This entry was posted in Book reviews, The ladies who say ooooh, Uncategorized. Bookmark the permalink.

6 responses to “‘An Australian Son’ by Gordon Matthews”