‘Australia Fair: Listening to the Nation’ by Rebecca Huntley QE73 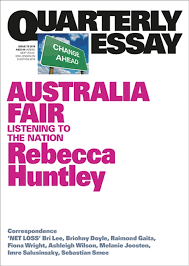 I’ve recently spent a week as the only Australian in a group of fourteen Americans.  While similar in age and political persuasion (mostly) to myself, it struck me how different my attitude towards the government was to theirs. While I might grumble about my government, (and heaven knows I can’t wait until the current crop of muppets departs the political stage),  I do not fear my government and indeed optimistically look to it to act as a force for good. I know, too, that although I may be left-of-centre in my politics, even conservative media and acquaintances urge that the “government should do something” about the issues they are complaining about. Despite conservative and business grumblings about red-tape, many people want red-tape once they themselves are being ripped off, and are disgruntled when, because of ineptitude or cronyism, corporations and shysters slip free of it.

In many ways social researcher Rebecca Huntley’s Quarterly Essay is a shout-out to the ‘sensible centre’ who, in spite of different political affiliations, have felt for some time that the climate really is changing and that ‘the government should do something’; that ‘big business’ and especially the banks are treating us like mugs, and that locking people up indefinitely on Manus Island and Nauru is not really sustainable for ever even though there is still support for turn-backs and off-shore detention. The figures show that the majority (albeit sometimes not a large majority) feel this way, but the government seems to respond only to the noisier, minority view.   Huntley makes no secret of her own political leanings, and she writes from the expectation that we will soon have a change of government.

She draws on historian John Hirst’s work, and particularly that of John Keane in his 2016 essay ‘Money, capitalism and the slow death of social democracy‘.  She harks back to Keith Hancock’s Australia, written in the 1930s when we were still clinging to the sheep’s back, where he described Australians’ almost instinctive turn to government to provide social good as ‘State Paternalism’ rather than State Socialism, and decried its deadening effect on society and its economy.  Most particularly she draws on social research: not the quick four-option polls that are churned out fortnightly in the newspapers, but in-depth qualitative research that tries to  uncover the values and priorities behind the opinions.

She points out that despite our disgust for our present crop of politicians, Australian (and especially older Australians) continue to respect the idea of democracy, and see nothing wrong with compulsory voting. They do, however, see a great deal that is wrong in terms of electoral funding and the pressure of lobby groups, especially big business.

This really is an essay, with a linking paragraph at the end of each section leading on to the next, just as we were taught to do in school. In a way, I wish that she had broken free of this template because it tended to infantalize her argument somewhat.  Nonetheless, it’s a cheering and rather empowering essay to read at a time when we feel that we’re actually in a position to vote for a changed political landscape. It would make a perfect reading partner to Judith Brett’s From Secret Ballot to Democracy Sausage, which I have not read (but Lisa at ANZLitLovers has) as a way of reassuring ourselves that we can be better than the government and politics that we have at the moment.

This entry was posted in Australian Women Writers Challenge 2019, Essays. Bookmark the permalink.

6 responses to “‘Australia Fair: Listening to the Nation’ by Rebecca Huntley QE73”