‘A Scandal in Bohemia’ by Gideon Haigh 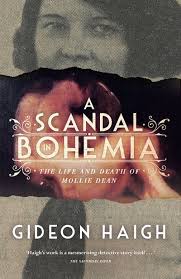 I read this book during a week when yet another young girl was raped and murdered walking home in Melbourne. As in 2019, so too in 1930. However, I don’t think that Mollie Dean’s rape and murder elicited the same outpouring of anger and grief in 1930 and at least in 2019 we have been spared the prurient exposure of the flaws of the victim, as distinct from the perpetrator.

Mollie Dean was violently raped in a St Kilda laneway at the age of twenty-five. She was intelligent, sexually active and she flitted around the edges of the bohemian scene in 1930s Melbourne. There is little hard evidence about her: just a nondescript photograph, a few bureaucratic reports, and some letters. And yet she has lived on, through the artistic and academic world of which she was only marginally a part. She was painted by the man who was one of the police suspects. Her story was incorporated into George Johnston’s My Brother Jack, which has in turn appeared on stage and screen. Other contemporary writers have taken up her story as well: she featured in a play Solitude in Blue and has recently been fictionalized in The Portrait of Mollie Dean.

Mollie is the focus of the book, but it is also a portrait of the artistic scene in Melbourne, with many familiar names: Max Meldrum, Mervyn Skipper, Justus Jorgensen, Nettie Palmer. Being a north-eastern outer suburban girl myself, I was drawn to the Eaglemont and Montsalvat settings, both being familiar to me.

Gideon Haigh’s treatment of Mollie Dean is non-fictional, and there is a long list of sources in the back. It is a very discursive account – rather too discursive – with every possible connection followed up in Haigh’s network of Melbourne bohemianism in the 1930s. As a result, an index was sorely missed as you found yourself wondering whether you had encountered a name previously or whether it was just another addition to the ever-burgeoning list of contacts and connections.

One response to “‘A Scandal in Bohemia’ by Gideon Haigh”