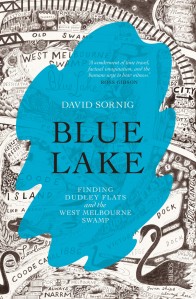 About thirty years ago, my then-husband and I won a prize in a raffle. It was a bus trip to and from Adelaide and two nights accommodation there.  (In fact, given that it takes a good 10 hours to travel to Adelaide from Melbourne, I’m starting to think that this might have been a second prize!) We left from Spencer Street (Southern Cross) station and drove through West Melbourne to get onto the freeway to Ballarat. I could still see the city skyscrapers on the right hand side of the bus – but what was this deserted flatland that we were driving through?  Warehouses, empty streets, great stretches of railway, blocks of containers, barren flat open areas. Where on earth was I?

Without knowing it, I was driving through the former Dudley Flats and West Melbourne Swamp, the focus of this excellent book. Even now, thirty years later, despite the construction of quays and high-rises, it’s an area that seems to resist taming. It’s almost as if it’s cursed. They build ferris wheels there, and they break down for years on end. They build high-rises, cover them with cladding, and they catch fire. Meanwhile, the wind sweeps along the newly-built boulevards, where trees struggle to grow.

Sornig starts his book with a death: the particularly gruesome death in 1942 of Elsie Williams, a Bendigo-born singer of Afro-Caribbean origin. Her body is savaged by the half-starved offspring and remainders of over 60 dogs that were kept by Lauder Rogge on his stranded ship, the John Hunt some six years earlier. She is discovered by Jack Peacock, the king of the Dudley Flats tip scavenging community.  These three characters – Elsie, Lauder and Jack – are the linchpins of this beautifully written narrative as Sornig traces through the attempts by governments, railways, do-gooders and now Border Force, to clean up and control what he calls The Zone.

Sornig describes himself a writer and a psychogeographer, not a historian (p. 152). I hadn’t heard of the term ‘psychogeography‘ before, but I have become aware that geography writing has changed over recent years, looking at space as well as place, tracing deep time as well as calendar time, revealing palimpsest as well as topography and emphasizing the connections between human individuals, their networks and ecology.

But Sornig is underselling his skills as a historian. He starts with the Blue Lake, known variously as Batman’s Swamp, Batman’s Lagoon, the North Melbourne or West Melbourne swamp,  covered with flowers, and described in idyllic and nostalgic terms by Edmund Finn (Garryowen) and George Gordon McCrae.  He traces through the various engineering manipulations that turned it into a wetland, and most importantly, the economic and social influences that drew the marginalized to its flats – the unemployed, alcoholics and homeless people. By the time it was known as Dudley Flat in the 1930s, it was notorious: my father remembered being taken to see the tin shanties as a young boy, and somehow government bureaucracies fell over each other in trying to move people on, resulting in their long-term residence on the flats.  His telling of the whole lives of his three main characters – Elsie, Lauder and Jack- encapsulate twentieth-century social history of the marginalized in a more human and nuanced way than any other I have read.

Like a Sebald book, this book is punctuated by black and white pictures, sometimes details of a larger picture, that is gradually revealed. There is a map, but it only appears 2/3 of the way through the book: a rather curious decision.  The narrative shifts back and forward as the narrator walks – literally – the Zone, while he also delves archives, sifts newspapers, follows up family history links.

It is beautifully written and very easy to read. It’s the best book that I have read all year, and one of the best books about Melbourne that I have encountered. Will it clean up in the non-fiction and history awards next year? It deserves to.

This entry was posted in Book reviews, Melbourne history. Bookmark the permalink.