‘Pale Rider: The Spanish Flu of 1918 and how it changed the world’ by Laura Spinney 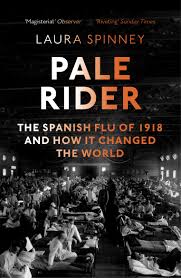 It is like the final insult. After four years of death, injury, mud and sand in WWI, it was the ‘Spanish flu’ that killed soldiers  just as the war was turning. It engulfed the whole globe -not just those countries involved in the war-  with most of the deaths occurring in the thirteen weeks between mid-September and mid-December 1918.

Flu epidemics have been with us for thousands of years. Because writing only emerged 4500 years ago, we cannot know when the first one was. We know that there was a  flu epidemic in Uruk in Iraq around that time; there is speculation that flu devastated the armies in Sicily in 212 BC; the first recognized flu pandemic is thought to have begun in Asia in 1580; there was one in 1830 and another ‘Russian’ flu in 1889.

The ‘Spanish’ flu of 1918-19 didn’t start in Spain. Indeed, according to Laura Spinney’s book Pale Rider, a hundred years later we’re still not sure where it did start. Maybe in the poultry farms of Kansas; maybe in the army barracks at Etapes in northern France where birds flocked in the Somme estuaries; or maybe in Shansi province in China, where ducks were herded through the paddyfields to eat insects. What is common to these three locations is birds. Recent research  involved disinterring an obese woman from the permafrost to sequence the flu virus still present around her organs when she died in 1918, and sure enough, the “Spanish” flu was a form of avian flu which had crossed over to humans.

The ‘Spanish’ flu arrived in Spain in May 1918. It had been in America for two months and in France for at least a couple of weeks. But because any mention of flu was censored in nations at war, it was only in neutral Spain that it was reported in the local newspapers. Although “Spanish” was the name that stuck, most countries named it after another country- generally a country they didn’t like: in Senegal they called it Brazilian flu; in Brazil they called it the German flu, the Poles called it the Bolshevik disease; in Iran it was the British flu.

Whatever it was, it affected an estimated 500 million people, 1/3 of the global population in 1918. Between 50,000 and 100,000 million people died.  It came in three waves: the first in March-April 1918; the second and most deadly wave in August 1918 when it spread through most of Europe, Iran, India and China; a third wave in early 1919 which affected Australia which had largely escaped the other waves through effective quarantine; and perhaps a fourth wave in the winter of 1919-20.  In Australia, more than 12,000 people died.

Children and old people have always been vulnerable during an influenza epidemic. What was unusual about the ‘Spanish’ flu was that if you  map out the distribution mortality rates, it shows a W-shape, with people between  20-40 particularly susceptible. Spinney suggests that flu might have been particularly virulent among otherwise healthy people because their immune system went into overdrive. Perhaps some older people, who would normally have been susceptible, had gained some immunity from the 1889 ‘Russian’ flu.

Modern medicine was powerless. Aspirin was prescribed in huge doses, and indeed there has been a claim (which Spinney largely discounts) that very high doses of aspirin , which causes the lungs to fill with fluid, may have actually contributed to the deaths of a sizeable proportion of the flu’s victims. (p.122). However, this argument cannot explain why so many people died in India and other countries where aspirin was not available. Another common treatment was high doses of quinine which added vertigo and vomiting to the symptoms, and may have contributed to the visually “washed out” appearance of the world that many recovering victims reported.  At a time when there was no firm distinction between commercial and folk medicine, it is no wonder that people resorted to traditional medicine and practices to ward off the disease, like ‘black weddings’, an ancient Jewish ritual which involved choosing a groom and bride from the most unfortunate in society (beggars, disabled) and conducting a wedding in a graveyard to fend off the disease.

Spinney’s book has an introduction, eight parts and an afterword. Part I, ‘The Unwalled City’ places influenza within a historical context, both across the centuries and the immediate WWI medical and social environment. Part II ‘Anatomy of a Pandemic’ describes the spread of the Spanish flu across the world. Part III ‘Manhu or What Is It?’ deals with the incomprehension and impotence of medicine and governments against the pandemic when it first emerged.  Part IV ‘The Survival Instinct’, which I found the most interesting, looked at the medical and social responses across the globe. Part V ‘Post Mortem’ looks at the search for the first ‘Spanish’ flu victim, and the toting up of the final figures. Part VI ‘Science redeemed’ details medical and scientific progress in understanding the pandemic, while Part VII ‘The Post-Flu World’ looks at the fall-out medically, socially, culturally and militarily after the last wave.  Part VIII ‘Roscoe’s Legacy’ discussed disease control in the future. The Afterword ‘On Memory’ looks at how the pandemic has been remembered, or more pertinently, forgotten.

Spinney’s book joins a surge of interest in the 1918-19 epidemic now that it is coming up to its centenary. Unlike many books that concentrate on its effects in one city or country, hers is a truly global approach to the pandemic.  As a science writer, she focuses on the disease, its manifestations and the scientific response, but she also interweaves this with a consciousness of how the experience of suffering and recovering from the flu leached out into music and literature in the succeeding decade.

As for her claims for it changing the world?  I’m not quite convinced, given how easily it has been forgotten. She argues that it ended the war because the German soldiers were so sickly; she suggests that it led to the introduction of universal health care (I’m not so sure- the NHS, Medicare/Medibank etc were introduced post WWII), and posits that the British negligence in treating Indians with influenza was an eventual catalyst to Independence (another event that seems to me to be too chronologically distant from the pandemic to be convincing).

Nonetheless, I found this book a fascinating read. It is well written, well-researched and rather chilling.

Read because: I’m aware that the centenary is upon us.

6 responses to “‘Pale Rider: The Spanish Flu of 1918 and how it changed the world’ by Laura Spinney”