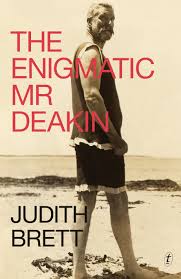 Much of the commentary about recent Australian politics has decried the cycle of replacement of Prime Ministers over the last ten years, the spectre of minority governments and the congestion of hung parliaments as if they were an aberration. However, reading Judith Brett’s biography of Australia’s second Prime Minister Alfred Deakin, The Enigmatic Mr Deakin, the early years of the Australian federal government were unstable and chaotic as well.

Yet in these years the federal government established some of the most progressive legislation in the world in relation to voting practices, a basic wage, pensions and arbitration, later dubbed ‘The Australian Settlement’ by Paul Kelly (see here and here).  This post-federation ‘settlement’ survived until dismantled by the Hawke-Keating government of the 1980s and 1990s, a process accelerated by subsequent neo-liberal governments.

Alfred Deakin was a ‘liberal’ in the true, nineteenth-century sense of the word;  not as in the so-called ‘Liberal’ party today which has long been the party of big business and is becoming increasingly conservative and faith-based. His biographer, political scientist Judith Brett, has written extensively about Liberal Party politicians, most particularly Robert Menzies in Robert Menzies’ Forgotten People (1992), Australian Liberals and the Moral Middle Class: From Alfred Deakin to John Howard (2003)  and a number of Quarterly Essays, most particularly QE19: Relaxed and Comfortable: The Liberal Party’s Australia (2005) and QE29: Exit Right: The Unravelling of John Howard (2007). She is not  of the right herself, but she is drawn to studies of the middle class and their politics.

And what a wonderful biographical subject Alfred Deakin is! He was a prolific writer and correspondent, much of which is available today. Journalist, lawyer and politician, he wrote professionally, socially and most importantly, reflectively over the length of his career.  A gift to any biographer is his prayer diary, where he mused on spirituality and destiny, and a series of notebooks called ‘Clues’ where he collected epigrams, notes on his reading and reflections on life. In addition, he kept diaries between 1884-1916.

Alfred Deakin was born in Melbourne in 1856, one of the post-Gold Rush  ‘Australian-born’ generation. It was this Australian-born quality that marked him out among the other British-born politicians who drove Federation. He began his profession as a lawyer, but moved into journalism through his contact with David Syme, founder of ‘The Age’. In 1879 he entered the Victorian state parliament as the liberal candidate for West Bourke. He served in a number of coalition government ministries, state politics being just as volatile as the early federal governments were to be.  He was instrumental in establishing factory legislation and initiating irrigation in Mildura. However, with the 1890s Depression, he suffered a kind of mid-life crisis as he confronted the limits of politics and struggled with guilt over investments he had recommended for family and friends. He returned to the back bench and took up his legal career again. It was the push towards Federation that brought him back to politics again, and took him to the international and national stage. He then served in the new, wobbly federal parliament with three stints as Prime Minister within ten years.

Brett’s biography certainly integrates the political, the personal, and the spiritual aspects of this complex man. In an unstable parliament, compromise was necessary, even to the extent of a ‘Fusion’ party with the NSW free-traders, whose economic policies he deeply opposed.  He distinguished between liberals (as he described himself) and Conservatives:

He was not, however, a fan of the newly emergent Labor Party (the first in the world), because of their allegiance to the working class:

“their platform is selfish and their discipline admirable. They constitute a class in politics, and refuse to support representatives who have not been selected from among their own neighbours” (cited on p. 257)

There is no getting around the fact that one of the first pieces of legislation passed by this new, largely progressive parliament was the Immigration Restriction Act, which formed the cornerstone of the White Australia Policy. Brett warns us against imposing our twenty-first century frame onto this legislation, which while seen by Britain as an insult to their Japanese allies, was intended to maintain high wages and living standards. Deakin was oblivious to women as political actors, and silent on indigenous Australians.

Deakin’s personal life was revealed through his diaries and correspondence. He married his wife Pattie, the daughter of a prominent Melbourne spiritualist in 1882 and they lived in South Yarra. Brett suggests that even though Deakin was affectionate and conscientious, it was not the marriage of true minds that perhaps he might have craved.  However, this did not affect the longevity of his marriage. Indeed, as a demonstration of the ebb and flow of relationships, as Deakin became increasingly debilitated by age and memory loss, Pattie came into her own, much healthier in later, post-menopause life, than she had been as a younger woman.

It is the spiritual aspect of Deakin that is the most fascinating to me, and Brett explores it fully thanks to Deakin’s own frankness in writing about it. Deakin believed in contact beyond the grave and was heavily involved in the Spiritualist scene in Melbourne. While this would have raised eyebrows, it did not render him beyond the pale politically as it would today [I’ve often thought that all  Australia would need today is a shaky mobile phone of Scott Morrison speaking in tongues at his Pentecostal church for his support to evaporate among many voters]. Deakin approached the Melbourne Unitarian Church to explore the possibilities of becoming a minister there, where Rev. Martha Turner (very rightly) told him that his spiritualist leanings would not be accepted by the congregation there. Although in later life he looked back at his more youthful Spiritualist activities with some cynicism, his sense of destiny and acknowledgement of the spiritual wellspring of his identity remained throughout his life.

Brett closes her book with a consideration of Deakin’s place within Australian politics and historiography.

By 2001, when the centenary of federation was celebrated, Deakin had faded to a face on an information board, one of the bearded worthies who had made the constitution and after whom things are named: a suburb, an electorate, a university, a lecture series..Among the political cognoscenti too he had become more of a cypher than a man…He came to represent the now discarded policies of tariff protection, state paternalism, centralized arbitration, imperial nationalism and the racism of White Australia, policies which were shaped in the early decades of the twentieth century and all but gone by its closing (p. 431)

She locates the turn against Deakin within the Liberal Party itself under John Howard’s leadership, where economic issues dominated the agenda and a reactive social conservatism was adopted. Brett highlights Deakin’s statecraft and energy, his civility, optimism, ability to compromise and assumption of the existence of a consensual centre. Oh to have some of those qualities today.

This is an excellent, well-written, fleshed-out biography. No wonder it won the National Biography Award this year.

I’m reviewing this as part of the 2018 Australian Women Writers Challenge.

5 responses to “‘The Enigmatic Mr Deakin’ by Judith Brett”