‘Innocent Erendira and Other Stories’ by Gabriel Garcia Marquez 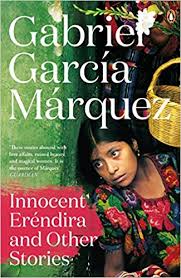 Last year I did an online course about Macondo, the setting for many of Gabriel Garcia Marquez’s stories and novels (see course details here).  Of course, I read all the stories in English, but I found the videos and transcripts in Spanish challenging and rewarding, and could revert to the English translations when it all became too hard. So, when I saw that Coursera were running a second course, I signed up.  It’s called Gabriel Garcia Marquez: Between Power, History and Love, and it looks at his work after the publication of One Hundred Years of Solitude.  Once again, I’m reading the books in English but here’s an added degree of difficulty: there are no English subtitles or translation of the transcript.  I’m on my own!

The first week looks at the short story collection Innocent Erendira and other stories. As the lecturers explain, these short stories were written after the critical acclaim of Hundred Years and before the publication of The Autumn of the Patriarch, which marked a departure from his earlier work. The stories therefore have wisps of his earlier work, but apparently prefigure the books that he was to go on to write.

The volume starts with ‘A Very Old Man with Enormous Wings’ about an angel arriving in a small village, where he is locked in the chicken-coop and becomes a sensation among the villagers.  It reminded me a little of Elizabeth Knox’s The Vintner’s Luck, where the angel Xas bursts into a real-life setting.  ‘The Sea of Lost Time’ is also set in a village, where the smell of roses permeates a village which is indebted to an unscrupulous gringo. The smell of roses reminded me of the butterflies in One Hundred Years of Solitude.  In ‘The Handsomest Drowned Man in the World’ a body washes ashore and the women of the village fall in love with it.  ‘Death Constant Beyond Love’ is about a dying senator who comes to a poverty-striken village and falls in love with a 19 year old. in ‘The Last Voyage of the Ghost Ship’ a ghostly ship, seen only in glimpses, sails into a village. Again, I was reminded of One Hundred Years, although it was a train that arrived in a village there.  ‘Blacaman the Good, Vendor of Miracles’ is a gruesome story about torture, where a trickster takes on a young boy as his sidekick.

The final story, which gives the collection its name, is ‘The Incredible and Sad Tale of Innocent Erendira and Her Heartless Grandmother’. Heartless indeed, this obese, manipulative grandmother prostitutes her granddaughter, chaining her to the bed to service lines of men.  It’s the longest story in the collection – more novella than short story, but it was too violent and distressing for me, I’m afraid.

Prostitution of children by parents arises in other stories here too, as in ‘Death Constant Before Love’ where a father gets his daughter to seduce the senator in order to gain a favor from him.  There are other themes that run across the stories too. Many of them make reference to the sea (‘The Handsomest Drowned Man’, ‘The Last Voyage of the Ghostly Ship’ and ‘The Sea of Lost Time’) and tricksters and shysters abound.  It’s a violent world.  There’s plenty of power being exercised here, by people who should be showing love.

Stylistically, the most striking story is ‘The Last Voyage of the Ghost Ship’ which has only one full stop: the one that finishes the story.  Marquez manages to progress the story well, using only commas.

So, all in all, a good collection of short stories, and the Coursera lectures are worth listening/watching too. Just don’t ask me to translate them!

This entry was posted in Spanish texts. Bookmark the permalink.