‘Swallowed by the Sea: The story of Australia’s shipwrecks’ by Graeme Henderson 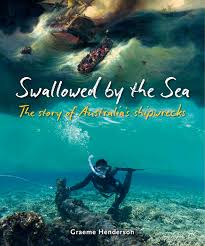 Every edition of each of the three newspapers published in Port Phillip during the early years of the 1840s had a prominently displayed ‘Shipping’ feature. It would list the ships that had arrived  and departed from UK and Australian ports  and their important passengers, then there would be a long list of the progress of various ships along the main shipping routes heading to or from Australia.  I’ve only been on a ship on the open seas once, but I can remember thinking as I looked at the empty waves around us, that it was as if we were the only ship on the ocean. Of course we weren’t: there were ships criss-crossing out of our sight and  modern communications ensured that we were easily trackable and findable.  Ship journeys in earlier times were nowhere near as trackable or findable, as Graeme Henderson’s book shows,  with several of the wrecks he describes still undiscovered.  But, as some of his chapters suggest, even in what seemed to be an ’empty’ sea, mariners’ knowledge of the sea lanes and ports meant that they knew where to go for help, even though it may be thousands of kilometres away.

Graeme Henderson is a maritime archaeologist and was director of the West Australian Maritime Museum for 13 years. He discovered his first shipwreck at the age of sixteen, sparking a life-long passion.  In this book he examines shipwrecks spanning 1622 right through to 2010 on both the west and east coasts of the Australian mainland.  Chapters 1-11 deal with shipwrecks during the mid 19th century when, of course, Australia was completely dependent on shipping for communication and travel.  Two of the  final three chapters deal with shipping losses in World War II (loss of the Sydney and the bombing of Darwin in 1942) and the final chapter brings us right up to the loss of the asylum boat, SIEV 221 which brought visible footage of a modern, but yet somehow timeless, shipwreck right  into our lounge rooms.

The chapters are arranged chronologically. As he says in the introduction, there were thousands of shipwrecks that he could have chosen from, and in selecting the fifteen ships he has covered the north, south, east and west coasts and included both ships where the wreck has been located, and others where the wreck has not yet been found.  I wish that he had explained somewhere the criteria by which he chose these particular wrecks.  The historical significance of some is clear: the Tyral is the first known wreck;  and the Batavia, the Sirius and the Sydney  are well known. Other ships, unfamiliar to me until now, had connections with other famous ships and explorers. For example, the Pandora had a role in the Bounty, and the Porpoise and the Cato were connected with Matthew Flinders, while the Mermaid had earlier taken Phillip Parker King on his circumnavigations of Australia.  Nonetheless, there are famous wrecks that are not here (the Loch Ard, the Clonmel spring immediately to mind) and I wonder why they’re not.

Each chapter opens with a beautifully coloured double page image, usually  of an underwater shot, but sometimes featuring aerial photographs showing cliffs or an island outline.  In his narrative he gives some background on the ship itself, the route, and the reason for the journey, the circumstances of the wreckage, and then progress (or lack thereof) in locating the wreck.   Each chapter has a small inset box that summarizes the type of vessel, the captain’s name, a description of the ship, its cargo, number of passengers and survivors and the date and location of the wreckage.  Chapters are generously supplied with maps of the time, but I did find myself craving at times a clear, current-day map because, beautiful, detailed and ornate though the older maps might be, they are not instantly recognizable to modern eyes.  The chapters are similar in length and style to a long feature that you might find in a travel magazine, but in this case they are lavishly illustrated with historic images from museums and galleries and supported by a reference list at the back.

There are stories of here of incompetence, as with Captain John Brookes of the Tyral, the earliest known shipwreck in Australian waters, or Captain Nolbrow of the Mermaid in 1829. There was laxness in ensuring that the ships were seaworthy, as in the case of the Cheviot which was wrecked close to the Heads in Port Phillip in 1887, bequeathing its name to the nearby beach from which Prime Minister Harold Holt disappeared in 1967. There is cowardice, as with Captain Palmer of the Bridgewater who sailed off, leaving the men of the Cato and the Porpoise to their fate (including Matthew Flinders), in a double sinking where three ships were sailing together.  Chapter 8 ‘Ladies on the shore’ differs from the other chapters in that it focuses on three individual women who were marked out by their connections with wrecks.  Eliza Fraser (the Stirling Castle in 1836) and Barbara Crawford (the America 1845) both lived for some time with aboriginal communities, while 16 year old Grace Bussell whose bravery in rescuing survivors from the surf, along with Indigenous stockman Sam Isaacs, echoed the British heroine who shared her first name, Grace Darling.

Historians often work alongside other professionals- archivists, archaeologists- who  work in history but with different interests and priorities. This was clearest to me in Henderson’s observation, which he raised but did not explore, that

It is in the consideration of the human traits on display during and after a ship’s wrecking- incompetence, skill, weakness and fortitude- that the most evocative stories emerge. (p. vi)

He described actions, but did not analyse, beyond labelling for example, Eliza Fraser as a ‘liar’ or certain captains as ‘incompetent’. As a historian, I found myself drawn to the chapters that most clearly focussed on the human, most particularly the loss of the emigrant barque Cataraqui in 1845 at King Island in Bass Strait with survival of only 9 from 431 passengers and crew, and the Dunbar in 1857 which sailed into the Gap at South Head (Sydney) with only one survivor.  The Dunbar and the SEIV 221 (2010) were both visual spectacles, occurring on inhabited coastlines and witnessed by horrified onlookers on the shore.

But many of the wrecks and the later searches for them did not take place in the public gaze, and I found myself startled and then vicariously proud when Henderson himself entered the picture as marine archaeologist, most particularly in the chapter on the Batavia where, as a 16 year old in 1963 he found the 1656 wreck of the Vegulde Draeck  and the chapter on the Fortuyn, which he is still seeking, using a combination of primary document research, scientific data about the speed of ocean currents and linguistic induction.

The book is written in clear, but rather no-nonsense prose.  The chapters are not long, and it lends itself well to dipping into as each chapter is self-contained.  I was almost always caught unaware by the abrupt ending of chapters, and even more so by the end of the book where I wish he had drawn it all together more. But perhaps this is the historian speaking, rather than the marine archaeologist.

Published jointly by NLA Publishing (National Library of Australia) and Western Australian Museum, the layout and illustrations of this book are striking. The pictures in the book are glorious, spanning old maps, paintings, etchings and newspaper images.  The text is interspersed with full colour plates of dives and seafloors, overwritten with observations from other marine archaeologists written in a font suggesting a hand-written message.  It’s a very human way of Henderson acknowledging the teamwork and shared endeavour in underwater exploration in what has clearly been a career marked by achievement and more importantly, passion.

One response to “‘Swallowed by the Sea: The story of Australia’s shipwrecks’ by Graeme Henderson”