Once again, here I am talking about an exhibition that’s about to close in a few days so if I pique your interest, you’re going to have to hurry up to catch it.  It’s called ‘Moving Tongues:Language and Migration in 1890s Melbourne’ and it’s on at the City Library branch in Flinders Lane, close to Ross House, until 30 October.

The first image that you encounter is that shown  in the poster above: the rectilinear street-grid imposed onto British settler colonies with little regard to topography or earlier use, conveying the impression of a single, replicable British culture.  However, this display argues that a multiplicity of languages and cultures existed within that grid, and it draws from the proceedings of Melbourne courtrooms in the 1890s to illustrate the point.

And so we meet Charles Hodge, the long-standing interpreter in Chinese cases and the ‘Chinese oath’ that was accepted by Victorian courts for many years which involved the lighting of a flame and the recitation of a pledge to tell the truth. We read of the ultimately tragic case of young Norwegian servant Louisa Fritz who accused her employer Theodore Ulstein of rape.  We read of the presence of Syrians and “British Hindoos” and see their sleeping arrangements in the terraced shops of Little Lonsdale and Exhibition Streets, and the alliances formed with indigenous people, especially at the Cummeragunga mission.  We see the November 1898 Parliamentary hearing called by the Victorian government, in order to hear opinions of the Immigration Restriction Act that was one of the first legislative acts of the newly federated Parliament of Australia.

The print-based display is supplemented by a small number of artefacts and replicas of courtroom documents, poetry  based on the Melbourne Poetry Map and artwork.  One large art piece by John Young is based on selections from the diary of Jong Ah Sing, who was incarcerated in lunatic asylums for 33 years. He wrote his diary in an attempt to prove his sanity. 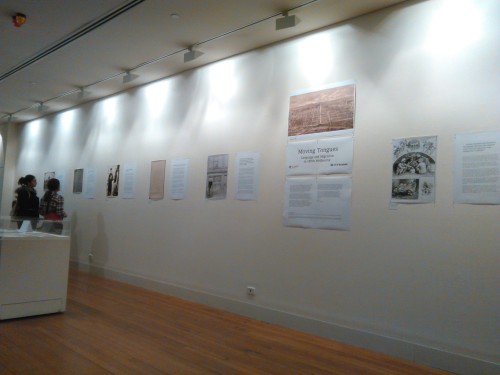 It’s a small, modestly presented display that conveys a broader linguistic and aural view of Melbourne than that presented in the Sentimental Bloke and other depictions of the underside of Marvellous Melbourne.  But hurry up- it closes on 30 October.  The City Library is open Mon-Thurs 8.00am – 7.45, Friday 8.00 to 5.45, Saturday 10.00 to 4.45 and Sunday 12 noon to 4.45.

This entry was posted in Exhibitions, Melbourne history. Bookmark the permalink.