I let slip last week that Governor Gipps was to visit the Port Phillip District in October 1841. There had been hints and rumours but now it had been confirmed: Governor Gipps was to visit for the first time.  He hadn’t been to Port Phillip, but he had already met the superintendent Charles La Trobe, who stayed with him in Sydney before coming down to Port Phillip.  The warmth of their relationship is reflected in the Gipps-La Trobe Correspondence, edited by A.G.L. Shaw.

The newspapers didn’t know whether to gush with excitement or to continue with their ongoing litany of complaint about the Governor and  New South Wales generally.  i.e “we provide all the money through land sales and they give us nothing back”; “why doesn’t Sydney give us more for infrastructure?” etc (not unlike the State Premiers in Australia today, come to think of it).  In the end the glamour of vice-regal ceremony won out and whole columns were devoted to the visit.

We’re not at that stage yet: they were still knee-deep in planning, and a public meeting was held at the Exchange Rooms to plan the visit. First question: how should he arrive? Mr Verner suggested that

the meeting should nominate a deputation to wait upon the Governor on board the steamer on her arrival in the Bay, and to request his Excellency to land publicly at the Beach at such time as might suit his convenience.  Mr Arden was of opinion that the better mode would be for the deputation to proceed in the Aphrasia to meet the Governor, and that His Excellency should be brought in the steamer to the wharf where the colonists could assemble to receive him on his arrival.  A lengthy discussion on this topic ensued, the one party maintaining that it was desirable that His Excellency should land at the Beach, because the approach to the town from that direction was calculated to give him a much more favourable impression of its beauty and extent that the approach by the river, and the other party insisting that if subjected to the necessity of wading through the swamp, His Excellency would scarcely have leisure or inclination to survey the opening beauties of our metropolis. (PPP 11/10/41)

In the end, it was decided to leave it up to the committee.  Next question- the public dinner. Who should be the chairman? It was decided that La Trobe should be asked to do the honours, to which he promptly agreed. And so, soon this advertisement appeared:

The social calibre of the stewards and the two-guinea-a-head ticket price indicated that this would be a thoroughly respectable gathering.  None the less, a correspondent to the Port Phillip Patriot (who, you may remember could well have been one of the authors of the Patriot itself) wrote to ask “is the Dignity Ball farce to be played out over again?” Certainly not, the Editor replied:

Character- not wealth or the fanciful distinctions of birth and station- is to be the test of exclusion from the dinner to the Governor, and that test no reasonable man can object to. [PPP p.2]

A night at the theatre 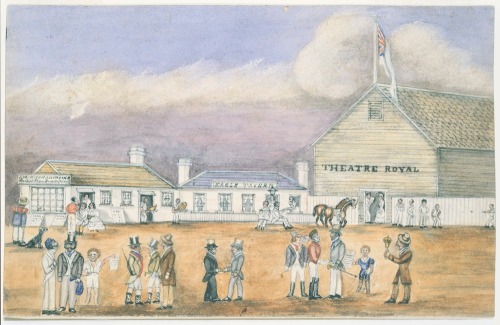 William Liardet’s depiction of the Theatre Royal (formerly The Pavilion) shown as it stood before its demolition in 1845 and  sketched from memory in about 1875. Source: State Library of Victoria

Not quite so respectable was the prospect of a night at the theatre. It’s easy to lose sight of how closely the theatre was scrutinized in early Melbourne. The Pavilion in Bourke Street, opened in April 1841 went through several name changes.  Edmund Finn, writing as Garryowen gives one of his typically colourful descriptions of the building:

Apparently it was licensed to hold concerts and balls, but no ‘theatre’ as such and the violation of its licence conditions led to a rather rambunctious night :

THE PAVILION. There was a tremendous ‘flare up’ in this establishment on Monday night last. Major St John had countermanded the entertainments in consequence of ballet dancing being introduced, that being contrary to the express rules laid down for their guidance. Application was then made to His Honor the Superintendent, but without it being stated to him the decision at which Major St John had arrived. His Honor, in ignorance of this circumstance, said he had no objection to the performance taking place as usual.  The time arrived, the doors opened, and the house filled to the ceiling; the leader of the band flourished his bow, a crash followed and the overture was gone through in good style; the curtain rose, and a song by a lady succeeded. At this critical juncture the chief constable, Mr Falkiner, stepped forward and caused a halt, upon the order given by the Major; an awkward pause followed, which the audience filled up by smoking cigars and sipping from stone bottles; a gentleman in top boots, accompanied by a ruffianly looking groom,  cleared the orchestra at a bound, and commenced a reel; Mr Miller quickly served upon them a writ of ejectment, by propelling them into the pit. Thus passed about an hour, when Mr Miller came forward and announced that His Honor the Superintendent had forbidden the performance- and the curtain dropped again. Then commenced a scene which we never hope to witness again- the hubbub was immense- Waterloo was a fool to it. After the house was cleared, which was with considerable difficulty, in consequence of the demand of the auditory for their money, a servant of His Honor rode up and announced that the concert might proceed; it was however too late, the public had dispersed. The parties interested in the success of the pavilion may thank themselves for this failure, having broken the rules laid down by the police magistrate for their guidance.  Until this place is under the control of respectable parties it never can prosper.[ PPG 13/10/41]

Reading through the Police Court columns, it comes as a jolt to realize just how draconian the N.S.W. “Act for the better regulation of Servants, Labourers, and Workpeople”(1828) legislation was,  even exceeding  the English Masters and Servants legislation on which it was based.Not just content with dismissal, employers could (and did) take their employees to court where they could be imprisoned, sentenced to hard labour or fined.  And so we read in October 1841 of Captain Smyth of Heidelberg taking his servant Ruth Robinson before the court for gross misconduct in what Smyth clearly intended as an exemplary punishment. I haven’t been able to locate any information about the Hired Servants’ Act, but it seems to have restrained Captain Smyth somewhat – although the punishment was still harsh when servants’ wages were about £15 per annum.

HIRED SERVANTS. Ruth Robinson, a hired servant in the employ of Captain Smyth, of Heidelberg, was charged with the following gross misconduct.  The previous day she wished to leave his service, when Captain Smyth said he would go to Town, and when suited with another servant, she was at liberty. During his absence the conduct of the woman Robinson towards Mrs Smyth was most abominable. She gave her mistress to understand that, the master being absent, she should not obey orders.  Upon being requested to bring in the dinner, she said that she would not, until she had dressed herself, then she would bring in the dinner, after which it was her intention to walk into Town; and as she said, so she acted.  The woman also had put herself into so violent a passion that Mrs Smyth had reason to fear personal violence. Captain Smyth said, that he brought the woman before the Bench upon public grounds; here were a number of females coming to the colony, honest and well behaved no doubt, but totally ignorant of their duties as servants; when they had obtained the necessary degree of knowledge, they became insolent, and endeavoured by every means in their power to obtain their discharge.  They were however particularly cautious not to commit themselves before their master, fearing that he might appear against them, but taking advantage of his absence abused their mistress, well knowing the objection of ladies to come into a public Court. He hoped the Bench would make such an example of this woman as to deter others from offending in like manner.

The Bench regretted that under the 10th section of the Hired Servants’ Act, they were forbidden to imprison females for misconduct in their hired services. By the 8th section of the same act they were empowered to inflict a fine, and sentenced her to pay the penalty of £5; if not paid in a fortnight her goods would be levied upon. She was ordered to return to Captain Smyth’s house, and deliver to Mrs Smyth what articles had been placed in her charge.

Winds mostly strong; a gale on 12th, weather frequently cloudy, threatening rain at times but none fell. Top temperature for the week was 70; lowest 45.