Still I paddle along as quickly as I can in my Coursera course on Gabriel Garcia Marquez‘s work, reading the literature in English with relish and the transcripts of the videos and linked articles in Spanish very slowly! 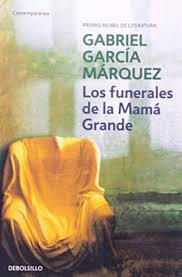 This week I read a collection of short stories called ‘Big Mama’s Funeral’, so named for the final story in the collection. As the course explains, some of these short stories are in effect practice-runs for material that would appear in A Hundred Years of Solitude, while others ‘speak to’ other literature that would be familiar to Spanish-language readers (but not necessarily English-language ones). One of Garcia Marquez’ stories, ‘One of These Days’ involves a dentist whose patient, the Mayor, comes in with an abscessed tooth which the dentist- maliciously- tells him can only be extracted without anaesthetic. This story ‘speaks’ to a story by Hernando Telles called ‘Lather and Nothing Else’, a fantastic story available here that has a barber called upon to shave the military officer responsible for mass killings and atrocities. (To be honest, I preferred the Telles story.)

The two most memorable stories for me were ‘Tuesday Siesta’ and ‘There Are No Thieves in this Town’. ‘Tuesday Siesta’ is about a woman and her daughter who travel by train to visit a priest in order recover the body of her son, shot in an Oscar Pistorius-like encounter. Garcia Marquez captures well the hot somnolence of the Tuesday siesta  and the mounting hostility of the villagers who surround the priest’s house. The second story ‘There Are No Thieves in this Town’ involved the theft of billiard balls.

There is another short story I’ve been reading, which was published in ‘Eyes of a Blue Dog’, another collection of Garcia Marquez’s short stories.  It’s called ‘Monologue of Isabel Watching it Rain in Maconda’ and it’s the longest short story I’ve ever read because this time, I am reading it in Spanish!  By the time I’ve read half a page, I’m sweating with exertion (to say nothing of the humid, rainy weather I’m reading about) and no doubt I’ll still be reading it in three weeks when the course is over!