‘The Convent’ by Maureen McCarthy

You know, the tourism industry should fall to its knees sometimes and thank local activists who save significant buildings and places from being privatized and subdivided into exclusive housing that most Melburnians will never set foot in.  Then somehow it becomes a tourist precinct, and money can be made from it, and people forget and wonder that it was ever under threat.

Abbotsford Convent is such a place. On a bend of the Yarra River, the land was valued by the Wurundjeri people who frequently met nearby where the Yarra River and Merri Creeks merged.  John Orr built Abbotsford House there and Edward Curr (who was a prominent opponent to Judge Willis) lived at the nearby St Heliers property  between 1842-1850.  By 1863 the Sisters of the Good Shepherd had consolidated their purchases of Abbotsford House and St Heliers and established a convent there.  In 1900 it was the largest charitable institution in the Southern Hemisphere, housing up to 1000 residents. For a century it provided accommodation, schooling and work for female orphans, wards of the state and girls considered to be in “moral danger”, financing its activities through farming, its industrial school and the Magdalen laundry service.  It was a place of dedication for the nuns who lived there, but many of its residents- particularly those in the laundry- had sad and bitter stories to tell.  In 1975 it was sold and used for the following 20 years by different education providers.  In 1997 it was onsold to developers, who planned to build 289 apartments on the site.  The Abbotsford Convent Coalition fought hard against this plan, and in 2004 it was gifted to the public by the State Government.  It now houses studios, office spaces and cafes and is the site for a lively program of performances and markets. 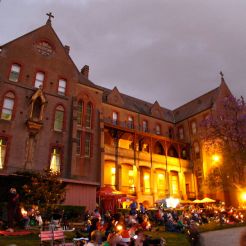 Carols at Abbotsford Convent. Photo by NickCarson at en.wikipedia

The Abbotsford Convent is the setting for Maureen McCarthy’s book named, appropriately enough, The Convent.  Based on her own family history, the book covers four generations of women whose lives intersected with the convent and the nuns who lived there.  Nineteen-year old Peach takes up a summer job at the convent when she receives a letter from her birth-grandmother, Ellen.  Peach has always known that she was adopted, and has until now felt no real curiosity about her birth-mother.  We learn that her grandmother Ellen had been raised at Abbotsford Convent after her mother Sadie had been declared an unfit mother in WWI Melbourne.  Ellen’s daughter Cecilia had been a nun at the the same convent.  The book shifts from one character to another, and between time periods spanning the early decades of the twentieth to the twenty-first century.

Books that rotate their focus between characters  call on a certain amount of goodwill on the part of the reader.  I found myself far more engaged by the stories of Cecilia and Sadie, and almost resented being brought back to the rather quotidian life of  19 year old Peach (and is it too trite to complain that I really disliked the name ‘Peach’ even though I know why it was used?) I felt that Cecilia, the nun, was sensitively drawn and McCarthy’s research into cloistered life, although somewhat heavy-handed, made Cecilia a rounded and nuanced character.

McCarthy is best known as a Young Adult writer.  The subject matter of the book transcends that genre, but the book was weighed down for an adult reader by the rather too obvious narrative scaffolding that supported the dialogue, and the rather laboured descriptions.  It reminded me very much of Rod Jones’ The Mothers (which I reviewed here) and it’s interesting that I found both these books, so similar in their content, to be too simply told.  Could it be that because both these stories had their origins in their author’s own family history, the overriding concern was to treat the story with respect, and that this affected the telling?  I have no idea, but with the exception of Cecilia’s chapters, I couldn’t shake my awareness that this book was written for a much younger audience than I.

There’s an interview with the author at:

I have read this as part of the Australian Women Writers Challenge 2016.

6 responses to “‘The Convent’ by Maureen McCarthy”