I’ve been thoroughly enjoying the Adelaide Writers Festival – six months after it was held.  The festival was recorded and is available on podcast. What a treat! No having to toss up which session to go to. No regretting that you’d hadn’t gone to the other one instead. No trying to think back after a full day of talk, trying to remember what the first session was about. 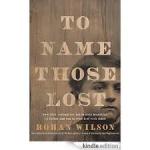 So I’ve heard Rohan Wilson talking about his book To Name Those Lost, which I’d just finished at the time, and which I will review soon.  He talks about the relationship between history and fiction, although not at the depth I might have expected from his PhD thesis (which he omits to mention at all- it’s as if he’s distancing himself from his academic credentials completely).

I very much enjoyed Clare Wright interviewing Jenny Uglow. In fact, I enjoyed that interview so much and was so taken by Uglow’s readings from her most recent book In These Times that I even purchased it (even though, as part of the TBR20 challenge I committed to – and have not really fulfilled- I promised I wouldn’t buy any more books until I read twenty of the books I already have.  Yet another resolution bites the dust).  I’m particularly attracted to the domestic scene in Britain during the Napoleonic Wars, because this was the period during which Judge Willis (my own research interest) grew up and formed his character and opinions.

A second panel chaired by Claire Wright discussed the art of historical writing with Jenny Uglow (again) and Helen Castor, who is sometimes seen on television documentaries.  Castor’s most recent work deals with powerful medieval women and Joan of Arc. Given Wright’s own interest in the historical documentary format, it was interesting to hear the way that the narrative can be shaped to the demands of a television audience while maintaining historical integrity.  A note of verisimilitude to the podcast was introduced by the RAAF flyover that interrupted the presentation!

After listening to the session with Don Watson,  I’ve resolved to borrow  The Bush again, as I had to return it to the library before starting it.  In his laconic style, he makes some pointed current-day political observations, as well as discussing settler and urban perceptions of ‘the bush’ over the last 200 years of white settlement. He observes that, unlike the American West, (e.g. Shenandoah) the Australian bush has never prompted a love song, and that the few ‘bush’ songs we have (Waltzing Matilda etc) are variations of songs written elsewhere.

The session with John Lanchester, author of Capital (reviewed here) gave insights into the opportunities and constraints of the fiction and non-fiction genre for authors.  Lanchester, whose work often deals with economic themes – most recently, the GFC- writes in both genres, with a leaning towards non-fiction. The fiction genre, he says, has two cardinal rules: first, that the author must not explain to the reader, and second, that unlikely events can not be introduced.  Non-fiction has no such constraints.

The theme of fiction/non-fiction was also explored in a panel on Van Diemen’s Land featuring Nicholas Clements, the young historian who has recently released The Black War: Fear Sex and Resistance in Tasmania (definitely on my TBR) and Rohan Wilson (recent author of To Name Those Lost) whose first book The Roving Party dealt with the Black War through fiction.  Wilson’s book took the contentious path of writing from the perspective of one of his Indigenous, historical characters, while Clements faced criticism that he had not consulted with present day Aboriginal groups.  In response to this, he argued that he wanted to present voices from the time, without the interposition of contemporary perspectives. Both books, from fictional and historical approaches, aimed to complicate a goodies v baddies dichotomy.

What a lovely virtual and asychronous day I’ve had at the Adelaide Writers Week!  I may just hop in my time machine and travel a bit further back and enjoy the podcasts from earlier years too.